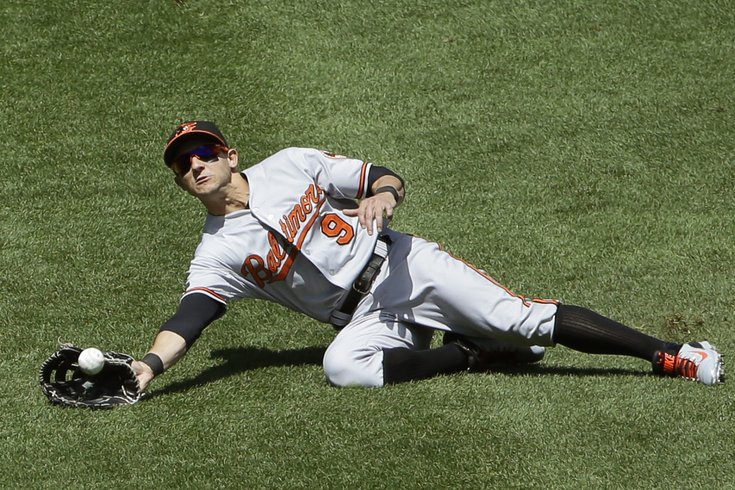 Baltimore's David Lough, who signed a minor league deal with the Phillies on Monday, fields Jacoby Ellsbury's fifth-inning, RBI double, which bounces out of his glove in a baseball game against the New York Yankees at Yankee Stadium in New York, Thursday, July 23, 2015. (AP Photo/Kathy Willens)

The Phillies signed outfielder David Lough to a minor league contract on Monday. The deal includes an invite to major league camp next month.

Lough is one of 23 non-roster players due to camp in Clearwater next month – but just the second outfielder, along with prospect Nick Williams. The Phillies also have six outfielders on their 40-man roster: Aaron Altherr, Cody Asche, Peter Bourjos, Tyler Goeddel, Odubel Herrera and Roman Quinn.

Last week, general manager Matt Klentak was asked if he had enough outfield depth beyond the five guys expected to make the major league roster.

“We have Asche that can go out there, we have (Darin) Ruf that can go out there – I think so,” Klentak said. “I would challenge any GM to go two or three injuries deep at one position and feel like they’re covered. That’s just now always the way baseball works. But I feel like, yeah, we’re OK in that department.”

Lough, by the way, is pronounced “Low.” Which immediately makes me think of this song.

Pitchers and catchers report to Clearwater on Feb. 17. The Phillies will hold their first full-squad workout on Feb. 23.