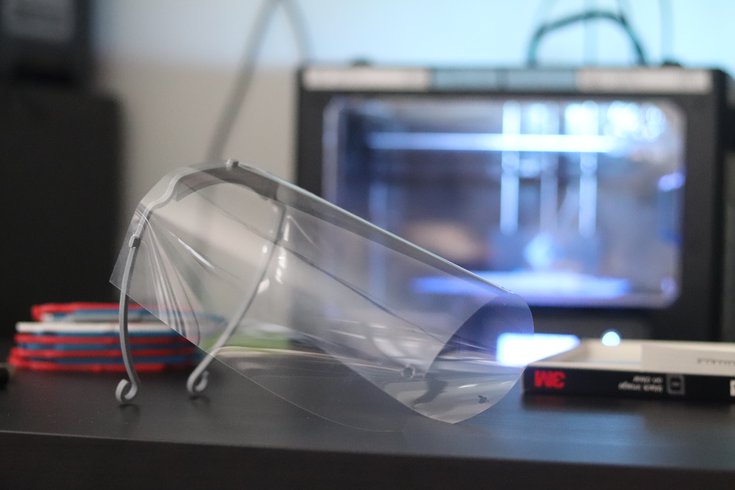 Trans 'RJ' Lualhati, a La Salle University alum and a materials engineer at Johnson & Johnson, is on a mission to help Philly's medical providers during the COVID-19 pandemic by producing 3D printed face shields from his Brewerytown apartment.

Trans "R.J." Lualhati was always encouraged to think outside the box as an integrated science, business and technology major at La Salle University.

So when he heard about the critical need of personal protection equipment for those on the front lines of the COVID-19 pandemic, it didn't take long for him to figure out a way to help.

Last weekend, Lualhati reached out to Bill Weaver, his mentor at La Salle, about using the university's four 3D printers to produce face shields for Philadelphia hospitals and first responders. By Monday, he was printing his first batch from his Brewerytown apartment.

The face shields, which will be donated, essentially consist of a headband with plastic film and can be used as a first-line of defense against possible infection, said Lualhati, who works as a materials engineer for Johnson & Johnson.

La Salle is temporarily closed due to the coronavirus public health emergency, like other universities in the area. Students are finishing the spring semester via online instruction. That left the university's 3D printers sitting unused.

So, La Salle supplied Lualhati with the printers and the plastic, a very malleable Polylactic Acid polymer.

Lualhati is picking up the bill for other supplies, including office transparency film and velcro. Asked why he's taking such measures, he replied, "It is personal drive. My sister and a few friends are on the front lines."

Philadelphia had 637 confirmed coronavirus cases, including 54 health care workers, through Friday afternoon. Three people were believed to have died of COVID-19.

Lualhati said it wasn't difficult to configure the printers to produce the face shields because a lot of printers are open source – meaning they aren't tied to any company's intellectual property.

"Right now I have made 28 face shields which I have delivered to Paul's Run Retirement Community for its nursing and physical therapy staff," he said.

Lualhati, who is working from home during the pandemic, estimated that he can print about 20 masks per day. He is hoping to make deliveries twice a week.

The Hospital of the University of Pennsylvania, Temple University Hospital and Abington Hospital – Jefferson Health have all expressed interest in receiving donations. Lualhati is open to scheduling deliveries to others as well.

Weaver, the interim chair of La Salle's integrated science, business, and technology program, first introduced 3D printing to Lualhati during a material science class in his junior year. It has fascinated him ever since.

"Everything about it was intriguing," he said. "Weaver lent me a 3D printer to tinker with and I ordered two of my own. I was always creating household products with it in my dorm room." He added that Weaver has supported him through every step of his career.

Weaver said he wasn't surprised when Lualhati texted him about his idea because he has been an innovator in class and at Johnson & Johnson.

While at La Salle, Lualhati spent a week as an Innovation Scholar at Stanford University's Hasso Plattner's Institute of Design. The knowledge he gained there helped him establish La Salle's Innovation Factory, a makerspace for students to create and innovate.

Lualhati stays connected to his alma mater by helping mentor students and keeping Weaver updated on his work at Johnson & Johnson, Weaver said.

The best way to connect with Lualhati for scheduling a delivery of his 3D printed face shields is to send him an email: Tlualhati1@gmail.com.