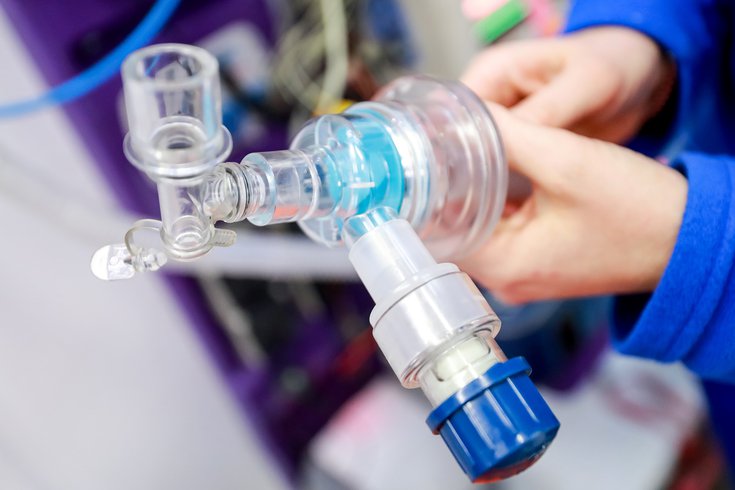 As the coronavirus crises worsens in Pennsylvania, state officials are setting aside $50 million to purchase medical equipment and supplies, like the ventilator shown above.

With the coronavirus pandemic threatening to overwhelm Pennsylvania hospitals and nursing homes, state officials are re-allocating $50 million to purchase medical equipment and supplies.

The state's health system has the capacity to handle the patients currently hospitalized with COVID-19, according to state officials. But they are anticipating a surge of cases – and that could cause shortages of beds, ventilators and personal protective equipment, including N95 respirators.

"We need to ensure that they have the equipment to care for these patients so that they don't have to ration or make unimaginable choices about who receives care," Gov. Tom Wolf said Thursday afternoon. "We need to make sure they have personal protective equipment to prevent themselves from becoming ill."

The funding, approved Wednesday by the General Assembly, will be placed under Wolf's jurisdiction. It only can be used if there are insufficient funding available from the state's disaster proclamation.

"We don't know when it's going to flatten," Levine said. "That is the purpose of the mitigation or prevention efforts that the governor has referenced. ... All of those are in an effort to bend the curve in the number of new cases that we are seeing. They all take time in order to show progress."

Ten counties are under stay-in-place orders, including Philadelphia and its four suburban counties. All non-life-sustaining businesses have been ordered to close indefinitely. Schools are shut down through early April.

Levine said it could take weeks before the effect of those efforts take place due to the virus' prolonged incubation period. Many of the infections confirmed in recent days likely happened before the restrictions were in place.

As of Wednesday, 40% of the state's 3,400 licensed intensive-care unit beds were still available. So were 75% of its ventilators.

To boost the number of beds available, state officials have relaxed restrictions, allowing beds to be used in areas typically not reserved for patient care. They also are considering repurposing ambulatory surgical facilities and using hotels to treat patients with sub-acute illnesses.

Plus, officials have urged elective surgeries be postponed to clear bed space – though Wolf acknowledged that may cause cash-flow issues for hospitals and health systems.

"Right now, with the amount of demand that is likely to occur as a result of this virus, the problems that hospitals have had in the past of trying to make sure that patient levels are high enough to keep them in business – that doesn't seem like that's going to be a problem," Wolf said.

Health systems in nearby states where the coronavirus crisis is considerably worse – like New York and New Jersey – have begun feeling the pinch.

In New York, the epicenter of the United States' COVID-19 outbreak, hospitalizations have increased by 40% since Wednesday. The situation is particularly dire at Elmhurst Hospital Center in Queens, where 13 people died on Tuesday.

New Jersey is creating three makeshift hospitals, including one in Atlantic City, in an effort to increase bed capacity. The state announced nearly 2,500 new cases on Thursday.