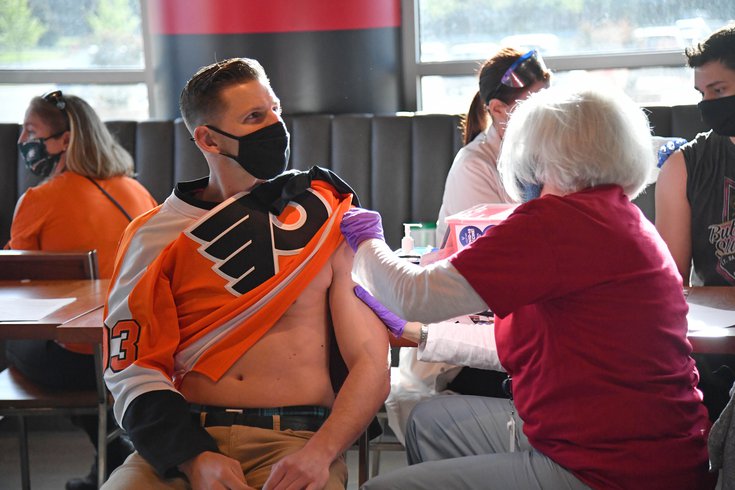 'Breakthrough' infections have made up just 6% of COVID-19 cases in Pennsylvania since the beginning of the year, state health officials say. Above, Stephen Zorzi, of Pittman, New Jersey, gets a COVID-19 vaccine before a Flyers game.

The data — which reflect national figures released last week by the U.S. Centers for Disease Control and Prevention — underscore the vaccines' abilities to prevent severe illnesses.

"No vaccine has 100% efficacy, so post-vaccination cases are to be expected," acting Health Secretary Alison Beam said Tuesday at a press conference in Lancaster County. "It's important to also remember that COVID-19 vaccines were developed to help people stay out of the hospital and avoid death — not just positive cases."

"With more than 7 million people vaccinated, the data is clear. The vaccines are safe and effective in preventing severe illness," Beam said. "My hope is that this data encourages everyone who has not yet been vaccinated to speak to their doctor about getting the vaccine as soon as possible."

State health officials did not include a breakdown showing the effect of the more contagious delta variant, which now accounts for 99% of COVID-19 cases nationwide.

According to the CDC, 65% of eligible Pennsylvania residents are fully vaccinated. Nearly 82% have at least received one dose.