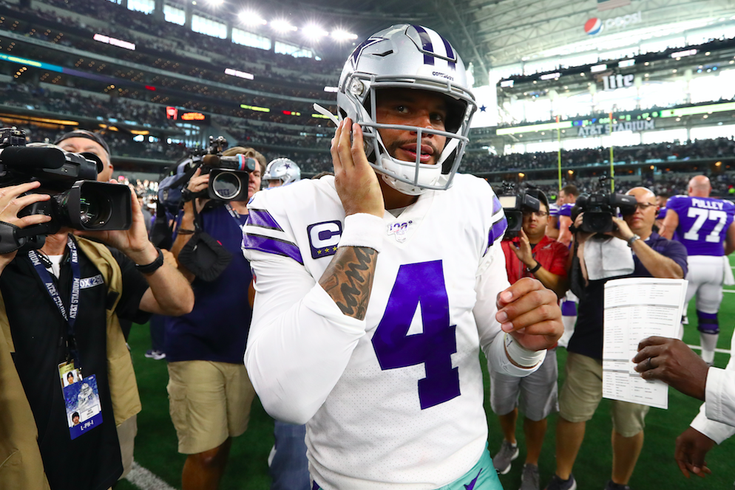 Dallas Cowboys quarterback Dak Prescott feels the Philadelphia Eagles were an "easy" opponent in 2018. Saying so in front of a camera may not have been his wisest move.

If you're a true Philadelphia Eagles fan, you mostly likely despise Dak Prescott and yet also drafted him to be your backup in fantasy football, knowing you'll probably install him as your starter. It's alright. Better to admit these things as a knowledgeable football fan. Dak is pretty good.

The Cowboys steamrolled the Giants on Sunday afternoon to the tune of 35-17, led by a 405-yard, 4 touchdown performance from Prescott. Wide receiver Amari Cooper had six grabs for 106 yards and a score.

RELATED: What they're saying about the Eagles: Carson Wentz has never looked better, making sense of running back rotation and more

While the Giants may be hapless with Eli Manning in 2019, there's no denying the Cowboys looked impressive in their debut. It looks like the NFC East will have its most intense Eagles-Cowboys rivalry in years, elevated by two young quarterbacks who want to deliver a statement about their long-term claim over the division.

There are differing views on the significance of so-called bulletin board material, but if the Eagles needed any this year, they already got it on Sunday.

During the Cowboys' rout of the Giants, a sideline camera caught a boastful interaction between Prescott and Cooper.

Dak Prescott to Amari Cooper after throwing him a touchdown against the Giants: Hey, was that easier than Philly?

Amari Cooper had 217 yards and 3 touchdowns (including the game-winner) when Dallas hosted the Eagles last season.

"Hey, that was easier than Philly?" Prescott asked.

The Cowboys have bragging rights at the moment, having beaten the Eagles twice last year — officiating in the second game aside. Capitalizing on a hobbled secondary probably is somewhat easy, which is why it's strange Dallas needed overtime to win at home.

The NFL season can be long and winding, but the Eagles should want the Cowboys thinking they can take them lightly. It may be annoying to hear Prescott gloat, but it will be that much sweeter if the Eagles can shut him up on Oct. 20.