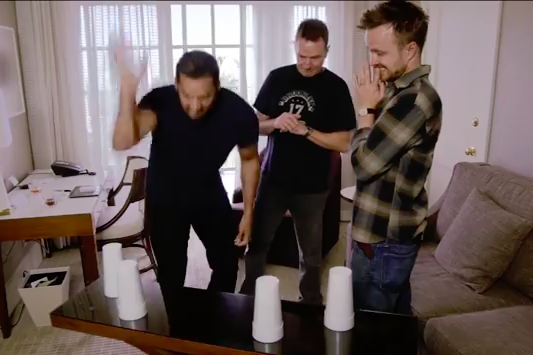 David Blaine is no stranger to illusions and the look of surprise on the faces of hapless onlookers who can't wrap their heads around his tricks.

In Blaine's 2013 documentary, "David Blaine: Real or Magic," the high-profile magician and endurance artist performed some of his harrowing feats for A-list celebrities and street crowds to see if they could resist the urge to scream or faint. One particular set of Blaine's encounters resurfaced and went viral this week after Blaine posted it to his YouTube page.

The video below involves an ice pick trick that most of us probably would not contemplate trying even if we knew within 1 percent certainty it wouldn't cause any harm. On hand for Blaine's tricks were Kanye West, Will Smith and his family, and "Breaking Bad" stars Bryan Cranston and Aaron Paul.

One would think that the people behind "My Beautiful Dark Twisted Fantasy," "Men in Black," and a hi-octane TV series full of explosions might be a little more steely, but they all get pretty spooked by the routine.

For those who want to know, Blaine's capacity to stick the ice pick through his hand without bleeding is the result of years of puncturing his skin to build up scar tissue. There was "a lot of trial and error," he once told TV Guide about the process, which involved acupuncture needles, X-Rays and MRIs to map out the bones, tendons and nerves in his hand.