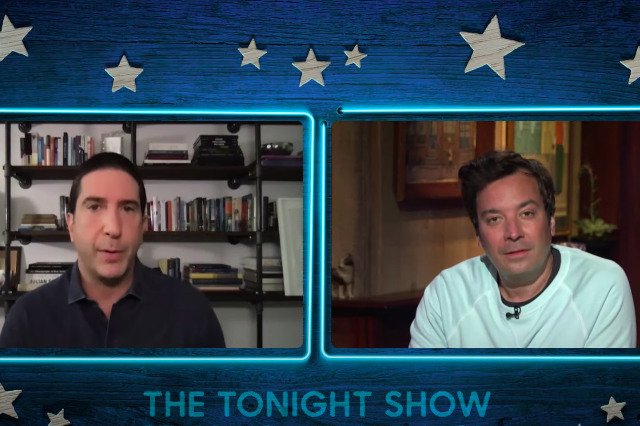 David Schwimmer appeared on 'The Tonight Show Starring Jimmy Fallon' and discussed the 'Friends' reunion that has been postponed due to the coronavirus pandemic.

Fans of the '90s hit sitcom "Friends" may not have to wait too much longer for the cast's highly-anticipated reunion. David Schwimmer discussed the reunion special while visiting Jimmy Fallon on "The Tonight Show" on Monday.

The special, which was scheduled to premiere on HBO Max in May, was delayed indefinitely because of the coronavirus pandemic. The 53-year-old actor said taping for the special is slated for later this summer but everything remains up in the air due to health concerns.

“It’s supposed to happen maybe in August, the middle of August,” Schwimmer told Fallon. “But honestly, we’re going to wait and see (for) another week or two, if we all determine it’s really safe enough to do. And if it’s not, then we’ll wait until it’s safe.”

Schwimmer described the special as a "really fun interview with some surprise bits." It will reunite the actor with his former co-stars Jennifer Aniston, Courteney Cox, Lisa Kudrow, Matt LeBlanc and Matthew Perry for the first time since the show ended in 2004. The special also will be filmed on the original "Friends" soundstage in Burbank, California.

Schwimmer, who played Ross Gellar, also didn't hold back his thoughts on whether or not Ross and Rachel (Aniston) were on a break. "Yeah, it's not even a question," he said. "They were on a break."

During Season 3, Rachel claimed Ross had cheated on her after he slept with another woman following a fight. Ross insisted it wasn't cheating because the couple had put their relationship on pause. "People are so passionately divided on whether or not (they) were on a break," the actor said.