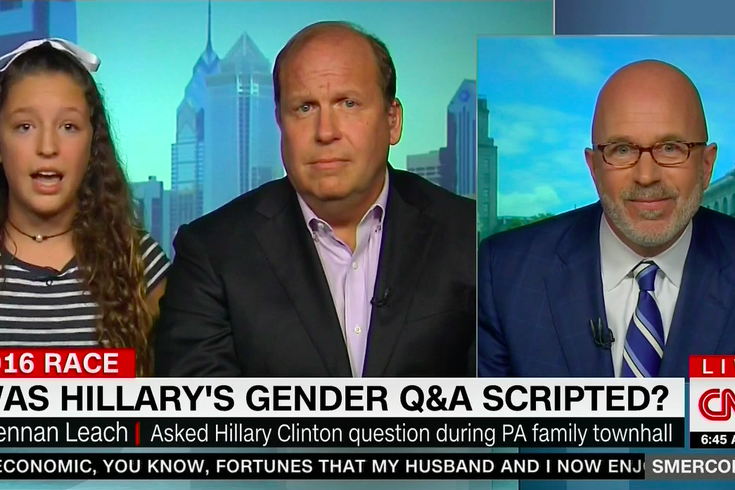 Sen. Darlin Leach, D-Montgomery, and his daughter Brennan Leach went on CNN to deny rumors that a question Brennan had asked at a Hillary Clinton town hall was planted by the Democratic nominee's campaign.

Both Leach and his daughter Brennan, 15, appeared on CNN's "Smerconish" Saturday morning to refute the notion that Brennan had been coached to ask Clinton about Republican presidential nominee Donald Trump's past comments about women at an event in Haverford Tuesday.

Brennan's question was picked up by several media outlets after the event, which was hosted by actress and Clinton supporter Elizabeth Banks. Here's the question, via Fox43:

“At my school, body image is a really big issue for girls my age. I see with my own eyes the damage Donald Trump does when he talks about women and how they look. How can you help girls understand that they are so much more than just what they look like?”

The question raised eyebrows because it seemed to play into Clinton's push to use Trump's past disparaging words about women against him. Additionally, her father is a Democratic state senator who has supported Clinton since the Democratic primaries.

Clinton has been accused of planting questions for campaign events in the past. Her campaign admitted during the 2008 Democratic primaries that it approached a student in Iowa to ask a question about Global Warming, and in 1999 MSNBC's Andrea Mitchell reported that Clinton had prearranged for a "friendly union leader" to ask whether she was going to run for a U.S. Senate seat in New York.

However, Brennan Leach asserted that she had no contact with the Clinton campaign, and said she asked the question because the issue of body image is important to her.

"I wanted to write this question, I came up with it," Brennan said, adding that her father did help her, but as a parent, not as a politician.

Sen. Leach went on to chide media outlets and reporters — specifically Fox News' Megyn Kelly — that raised the question of whether his daughter had been told what to ask without practicing "journalism 101" and calling him to ask about the event before reporting on it.

"This was a spontaneous question from a girl that cares deeply about an issue, and that's all it was," Sen. Leach told Smerconish. "Basic journalism would have uncovered that."

megynkelly... do you even care about reporting the truth? How do you call yourself a journalist?

Leach went on to say he has received "outright hate" from Trump supporters, including more than 30,000 Twitter messages, threats and "horrific" suggestions about his daughter.

The controversy over Brennan's question came shortly before the Washington Post published video of Trump in 2005 making sexually explicit comments about women, including the suggestion that he would make unwanted advances on women because he was famous.

"You know, I’m automatically attracted to beautiful — I just start kissing them. It’s like a magnet," Trump said in the video. "Just kiss. I don’t even wait. And when you’re a star, they let you do it. You can do anything."

The release of the video has created a sizeable backlash and caused some Republicans to withdraw their support of Trump. Trump said he regretted the comments, adding, "I was wrong and I apologize."

Here is my statement. pic.twitter.com/WAZiGoQqMQ