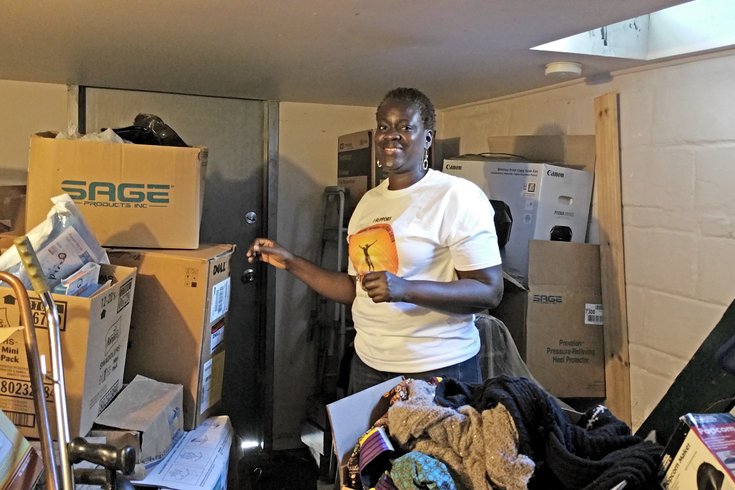 Mary Moore Kieh stands among medical supplies and equipment she has amassed at her home in Yeadon, Delaware County. Kieh is sending the supplies to Liberia, where she is building a health care center in honor of her late brother

Mary Moore Kieh doesn’t think what’s she’s doing is anything out of the ordinary. Yet at certain points in time, her Yeadon, Delaware County, home serves as a way station for all sorts of medical equipment, so congested that you can’t take two steps through her living room to her dining room.

Kieh doesn’t think what’s she’s doing is anything out of the ordinary. Yet the mornings she can hardly get of bed, her back so tight from lugging bulky mattresses and monitors around, it never deters her from pulling a 12-hour shift as a nurse at Mercy Fitzgerald Hospital in Darby.

Kieh doesn’t think what’s she’s doing is anything out of the ordinary. Yet she’s determined to do something in her native Liberia that all logic yells is impossible: she is building the Robert Moore Memorial Health Care Center, dedicated to her brother Robert, who died of complications after having a limb amputated in 2011. Kieh is doing it literally piece by piece, sink by sink, bed pan by bed pan, EKG machine by EKG machine, scavenging any medical equipment she can get her hands on or purchase — through the considerable help of Mercy Fitzgerald Hospital.

“There’s been times when she’s come to me crying, because her back is hurting and she’s tired ... Then she’ll get up the next morning and work a 12-hour shift at the hospital. I tell her to go up and rest, and she says she can’t, because she has too much to do." – Marilyn Kieh, daughter of Mary Moore Kieh

She bought an ambulance on Craigslist for $4,000 out of her own pocket. She was the architect and designer of the building that will house the clinic — with no background in those fields. She’s traveled back and forth to Liberia, and installed the floor tiles of the clinic.

Kieh doesn’t think what’s she’s doing is anything out of the ordinary. Yet everyone that knows her and is around her says she and her mission is anything but ordinary.

“Mary just happened to mention it to me in passing one night, three years ago, that she was building a clinic in Liberia, and I was like, ‘You’re building a clinic? That’s phenomenal!’ But that’s typical of Mary, she’s always looking to help people,” said Maureen McCullian, a Mercy Fitzgerald nursing supervisor, who introduced Kieh to Sister Donna Watto, vice president of mission integration at Mercy Fitzgerald, who got the hospital involved.

“Mary is a pretty amazing person who is incredibly resourceful. She bought an ambulance and two generators on eBay to power the clinic and had to build additional rooms for laundry. She’s gone through very frustrating issues shipping these huge containers, and there is a tremendous amount of corruption in Liberia. She ships these containers and she had to take three weeks’ vacation time and bribe people to make sure the shipping containers reached the destination. That’s taken a lot out of her, but you can’t stop her. Those are the kind of things that she’s had to deal with. She keeps going and going and going. She’s unbelievable.”

The reason is simple.

Unsterile conditions are too common in Liberian heath care, said Kieh, who came to the United States in 1998 with her husband, Mark, an infectious-diseases physician working on the Ebola virus. 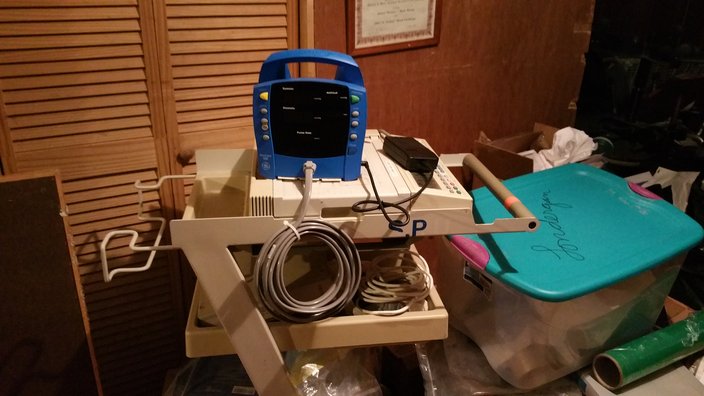 “I saw my brother Robert suffer, and it’s something that poor people see all of the time in Liberia. They have no access to health care there. I wanted to do something about it," Kieh said. "I wanted to help with Liberia’s health care needs. This country is a gift. I wouldn’t be able to do what I am without being here in the United States.

“Liberia lost many health care workers escaping the civil war there (from 1989-2004). When the Ebola virus was there (killing more than 11,000 in West Africa and 4,810 in Liberia), more health care workers died," she said. "The other problem with the Liberian health care system is I don’t how much the government puts into it. They don’t have the equipment to properly diagnose people. People suffer for a long time from minor conditions and die in Liberia that otherwise wouldn’t die in the United States. I know what it’s like to be deprived. Every time I go home, I see people in worse condition than I was in. The suffering is just too much.”

Mary, 50, a mother of four, is still wrestling with issues. She’s working on plumbing and the water supply to the clinic, and getting enough generators to run it, since the clinic has no access to electricity.

"How can you not be inspired by her? ... She and her husband are in the health care field and could be living very comfortably in this country, instead they’re doing something so monumental in their own country to make health care more accessible to people that normally wouldn’t have it." – Sister Donna Watto

Kieh and her family have already doled out more than $150,000 of their own money to get the clinic up and running. Watto and Mercy Fitzgerald used its vast network in the health care field to donate anything they can to Kieh, which includes access to equipment and supplies that hospitals no longer need.

“Mary is going to get it done,” said Watto, who has been associated with Mercy Fitzgerald Hospital for 13 years and the Mercy Health System for 33 years. "How can you not be inspired by her? You have to be impressed, because of what she is trying to do. She and her husband are in the health care field and could be living very comfortably in this country, instead they’re doing something so monumental in their own country to make health care more accessible to people that normally wouldn’t have it. To be doing it on their own, with their own money, makes it even more impressive.

“I’m impressed by Mary’s energy and by her desire to help those that are less fortunate—and making such a personal commitment to it. Her story resonates with my own Sisters of Mercy community philosophies," the nun said. "We take a third vow that we pay special attention to serving the sick, the poor and the uneducated. We have a deep desire to tend to those less fortunate and vulnerable populations. To me, the population Mary is serving is vulnerable.”

Marilyn Kieh, Mary’s 23-year old daughter who is majoring in biology at West Chester University, has been at Ground Zero for her mother’s mission. She’s traveled with her to go pick up medical supplies at 6 a.m. and haul them back home. “Can you get up and help me, I just found a hospital bed on Craigslist?” she would ask Marilyn.

She sees her mother, who endures two herniated disks in her back, lifting and moving heavy medical equipment.

“Every single day was work for my mother,” said Marilyn Kieh, who was born in Liberia, has dual citizenship and is thinking about attending medical school. “There’s been times when she’s come to me crying, because her back is hurting and she’s tired, and says she didn’t know if she could do this. Then she’ll get up the next morning and work a 12-hour shift at the hospital. I tell her to go up and rest, and she says she can’t, because she has too much to do.

“Parents teach you and want you to become better than them. How am I going to do that? My mom never plateaus. This clinic is one thing she has to achieve. She told me about the times when she walked miles and miles when she was starving. She told me about the times when she was thirsty, and the water wasn’t clean. Basic stuff we take for granted in the United States. She wants to open this clinic and not charge people, so poor people can get health care and women can give birth to babies in a sanitary environment.

“She wants to improve life in Liberia," Marilyn Kieh said. "It’s not her story anymore. She has a larger vision. She sees little children back in Liberia who are starving, and she wants to create a foothold where people in Liberia can build. Growing up, it was a sacrifice, not having her around because of all the good work that she does every day. But you get older and you realize. I’m honored to be her daughter. I’ve never seen someone give so much of herself. I’m trying to keep up with her.”

“I don’t see myself as something special,” Kieh said. “This is just what God needs me to do. I’m just trying to help.”