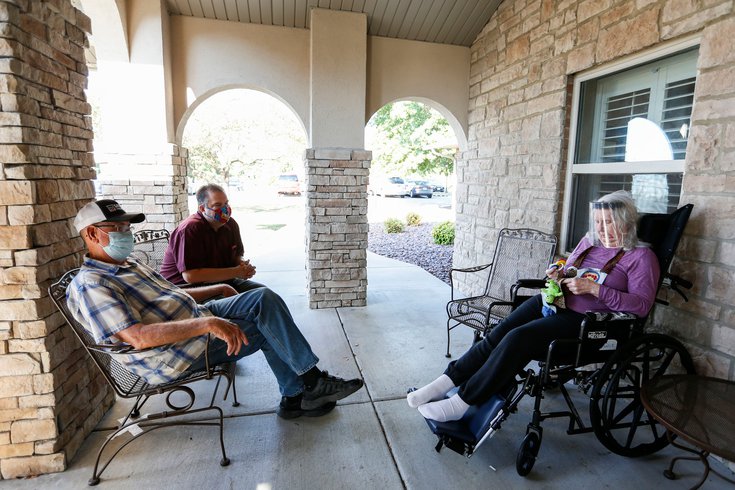 Dementia patients are twice as likely to get COVID-19, according to a new study published Tuesday. In the photo above, Mark Applegate and his stepfather John Alexander visit Brenda Alexander, Mark's mom and John's wife, who has been in a Missouri nursing home with Alzheimer's disease since 2018.

U.S. residents diagnosed with dementia are twice as likely to contract the coronavirus and four times more likely to die from its complications, according to a sweeping new study.

Researchers from Case Western Reserve University examined the electronic medical records of 61.9 million adults — about one-fifth of the American population. Their findings, published Tuesday by the Alzheimer's Association, warrant new strategies to protect dementia patients amid the COIVID-19 pandemic, the researchers said.

"These individuals are being impacted in significantly greater rates than the rest of society, yet we don’t have things in place to protect them," Beth Kallmyer, vice president of care and support for the Alzheimer’s Association, told Forbes.

Black people with dementia were almost three times as likely to contract the virus than their white counterparts, a finding that exemplifies the disproportional racial impact of the pandemic.

"This study highlights the need to protect patients with dementia, especially those who are Black, as part of the strategy to control the pandemic," the researchers wrote.

There are an estimated 5.8 million Americans age 65 and older living with Alzheimer's disease — the most common form of dementia, according to the Alzheimer's Association. Worldwide, some 50 million people have been diagnosed with Alzheimer's or other dementias.

Many dementia patients have risk factors that make them more more vulnerable to COVID-19 than the average adult — old age, living in nursing homes or high-risk medical conditions, including asthma, obesity and heart disease.

However, when researchers accounted for these risk factors, dementia patients were still twice as likely to get COVID-19.

Dementia symptoms, including impaired cognitive ability, may partly explain why dementia patients appear more vulnerable than other Americans with the same risk factors. They may interfere with a patient's ability to follow prevention measures without assistance.

"Folks with dementia are more dependent on those around them to do the safety stuff, to remember to wear a mask, to keep people away through social distancing,"  Dr. Kenneth Langa, a University of Michigan professor of medicine who was not involved in the study, told the New York Times. "There is the cognitive impairment and the fact that they are more socially at risk."

Researchers also found that patients with vascular dementia, a form caused by damaged blood vessels, had the highest risk of any dementia patients. COVID-19 has been linked to inflammatory responses in the circulatory system.

The study collected data from 360 hospitals and 317,000 health care providers located in all 50 states from February through August.