DEP: Much of oil removed from Schuylkill River

Cleanup efforts will continue throughout the week 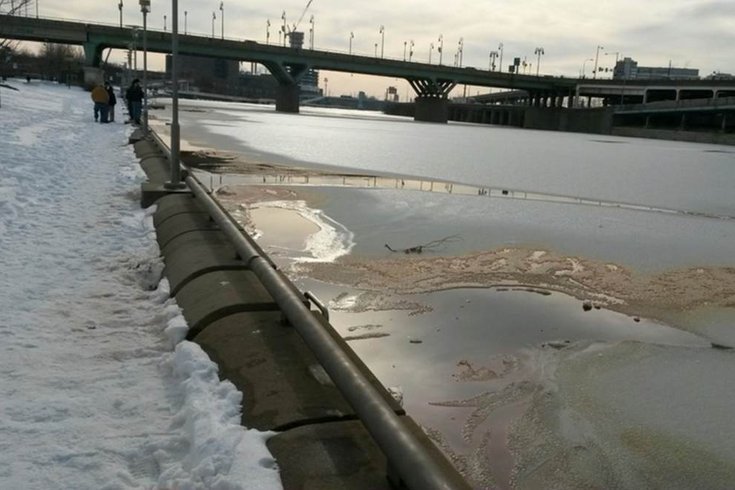 The Philadelphia Office of Emergency Management tweeted out this photo of the oil spill on the Schuylkill River at Chestnut Street on Monday.

Much of the heating oil that spilled into the Schuylkill River has been removed by using vacuum trucks, the Pennsylvania Department of Environmental Protection announced Tuesday. But efforts to identify the path the oil took remain ongoing.

Much of the oil was trapped by heavy snow, but red dye fuel could be seen Monday in the river from Market Street to Locust Street. DEP officials expect water cleanup efforts to be completed by the end of the week, but the timeline for the land cleanup remains indefinite.

"That is all under investigation right now," Cain said. "We're still doing all of that, trying to figure out exactly what happened, the pathway from the tank to the river. All of that information will be forthcoming, but we don't know all the answers yet."

CenturyLink will be responsible for paying for the cleanup efforts, Cain said.

The U.S. Coast Guard will assist DEP in conducting a Shoreline Cleanup Assessment Technique to determine the extent and impact of the oil spill.

Miller Environmental Group Inc., a contractor hired by CenturyLink, will dig up snow and soil to try to determine where the oil traveled on its way to the river. CSX Rail will re-route its traffic from the area. The nearby portion of the Schuylkill River Trail will remain closed for another three to five days.

The oil's path remains unconfirmed, but evidence suggests it might have reached the river via an underground storm drain, according to the Schuylkill River Development Corporation.

A sewer manhole along the Schuylkill River Trail showed high levels of contaminants, but remediation workers were unable to lift the cover, DEP officials said. A piece of absorbent material stuck into the manhole came out red. Another manhole located near the CSX tracks could not be tested.

The spill was caused by a sensor malfunction on an emergency generator, according to the U.S. Coast Guard, which responded to the scene Monday alongside the U.S. Environmental Protection Agency, DEP and several Philadelphia agencies. The agencies deployed a remediation plan that included deploying absorbent materials into the river and using vacuum trucks to remove oil trapped in the ice.

The Philadelphia Water Department announced that the spill will not affect the city's drinking water because it occurred downstream of drinking water intakes. No fish kills associated with the spill have been reported, according to DEP.