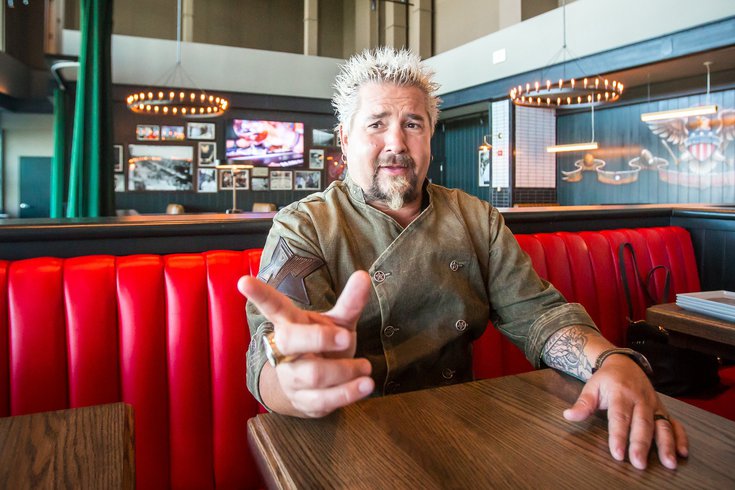 Guy Fieri explores some of Philadelphia's food scene in the new episode of "Diners, Drive-Ins and Dives."

Three restaurants were featured on the episode, which premiered Aug. 21 on the Food Network. Hardena, an Indonesian restaurant in South Philly, Stogie Joe's, an American restaurant in Passyunk Square, and Gaul & Co. Malt House, a pub in Port Richmond, were the featured eateries.

It had been speculated on social media and in reports that three more Philly restaurants also would make the show – Farmer's Keep in Center City, Mom-Mom's Kitchen in Bridesburg and Woodrow's Sandwich Shop in Bella Vista. But they did not appear in Friday's episode, but it was not clear if they would be featured a future episodes.

RELATED: Check out the shows, movies coming to Hulu in September, and catch the ones that are leaving before they're gone

Fieri visited the Philly area in early March to tape the episode, which shows the restaurants operating before the shut-down orders imposed amid the COVID-19 pandemic. Philly restaurants will be able to resume indoor dining on Sept. 8.

The specific foods being featured on the episode have been kept secret. Hardena's owners posted on Instagram that the restaurant had to close for three days for taping – without disclosing Guy Fieri's visit.

Guess who will be featured on @Guyfieri Diner Drive in’s and Dives this Friday Aug 21st at 9pm on the @foodnetwork ? 😻 YEP, US!! So honored to cook alongside you chef! Thank you so much for coming! (This happened right before quarantine lol) I know a lot of people were upset we were closed for 3 days on a weekend >.< but we had to keep this a secret LOL forgive us ❤️ #foodnetwork #dinersdriveinsanddives #guyfieri #flavortown #indonesianfood #indonesianfoodinamerica #indonesia #philadelphia #southphilly #philly #womenownedbusiness #minorityownedbusiness #killinit #beastmode

Fieri has hosted "Diners, Drive-Ins and Dives" since the show launched in 2006. It is now in its 33rd season. To watch new episode Friday night on the Food Network, check the listings of your cable TV or streaming TV (including Hulu + Live TV) provider.

The first 32 seasons of "Diner, Drive-Ins and Dive" can be streamed on Hulu.

The headline and content of this article were updated after originally published to reflect that the episode of "Diners, Drive-ins and Dives" featuring Philadelphia restaurants has aired.