"Acoustruments" use ultrasonic sound from smartphones to access applications 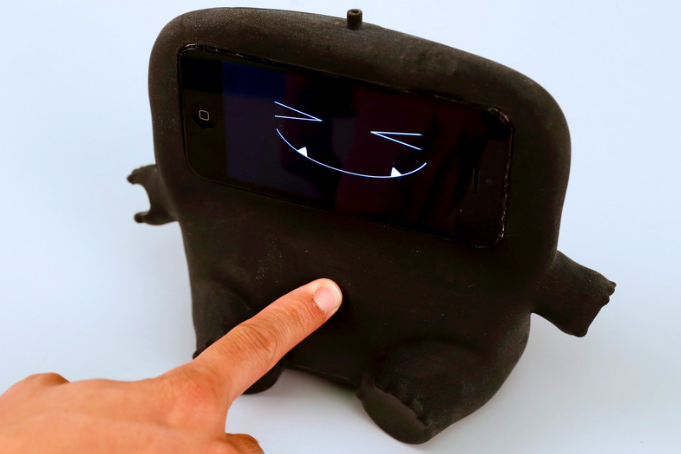 A doll whose iPhone head uses soundwaves to come to life.

Inspired by the motto "Science at Play," Disney's research labs have a way of arriving at practicality through whimsical thinking.

One of the latest projects out of Disney's lab at Carnegie Mellon harnesses the power of soundwaves emitted by a smartphone to enable interaction with physical buttons, knobs, levers and tubes.
The technology behind Disney's "Acoustruments" works by programming a smartphone to emit continuous, ultrasonic sound that can be guided by tiny tubes to the device's microphone. Based on the same principles at work in wind instruments, buttons and other attachments modify the tone to interact with software that can detect the waves and engage a variety of applications, Mashable reports.
While the concept may seem like a counterintuitive step away from the digital interface of the smartphone, it's a technically savvy idea that can come in handy.  As an alarm clock, for instance, it enables hitting a snooze button without actually having to open your eyes. It can also be used to extend the application of toys without an external power source, or allow drivers to use smartphone applications with easily accessible button installations.

"Using smartphones as computers to control toys, appliances and robots already is a growing trend, particularly in the maker community,” said Gierad Laput, a Ph.D. student in Carnegie Mellon’s Human-Computer Interaction Institute (HCII), in a release on the research. He added, “Acoustruments can make the interactivity of these new ‘pluggable’ applications even richer.”

As Mashable points out, many of the activities Acoustruments enable could also be done using Bluetooth, but the difference is that there is no need for anything beyond the soundwaves and the software inside the phone.
The video below explains more about the science of Acoustruments and demonstrates how a specially designed case can make the most of the technology.