'The Flea Market' comes out in fall 2019, but in the meantime we've got a sneak peek 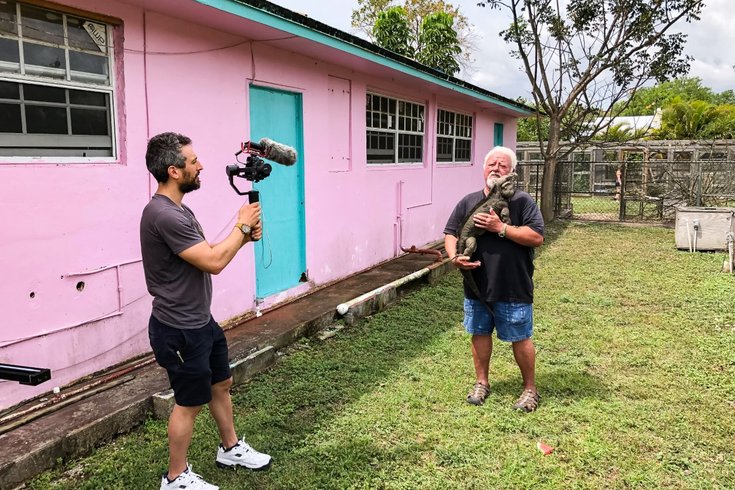 Director of 'The Flea Market' Ben Feldman interviews reformed insect and reptile smuggler Tom Crutchfield, of Homestead, Florida. Feldman's documentary, in part, revisits the theft of $40,000 in bugs from the Philadelphia Insectarium and Butterfly Pavilion in August 2018.

Yeah, we also tried to forget it.

But local director Ben Feldman, along with Asta Entertainment LLC, is taking a closer look at the caper at the Philadelphia Insectarium and Butterfly Pavilion that made national headlines and topped our list of "2018's Oddest Odd News."

"The Flea Market" will explore not just the local incident, but also what Feldman calls the "vibrant" black market that sells rare and exotic bugs around the world.

A bit of back story: In August 2018, $40,000 worth of insects and lizards were stolen in what police believed to be an inside job at the Philadelphia Insectarium and Butterfly Pavilion in Holmesburg. The thieves took at least 80 percent of the insectarium's entire collection, including a six-eyed sand spider, one of the most venomous spiders in the world.

According to Feldman, the investigation into the case is ongoing. No one from the Philadelphia Insectarium was available Tuesday to speak about the theft and its aftermath. This article will be updated with those details as they become available.

The Philly heist is the perfect jumping off point for an investigation into the underground marketplace for these insects — which range from pet tarantulas to butterflies worth thousands of dollars apiece — and who is buying them.

"It answers the question that was on everyone’s mind," Feldman told PhillyVoice on Tuesday. "Who the f**k would steal $40,000 worth of bugs?"

For the documentary, Feldman interviews smugglers — some awaiting sentencing, some reformed who've been in and out of prison for selling invasive and rare species — regulators, some of players connected to the incident in Philly, and bug collectors, to try and understand the human behaviors behind the community of people who collect something that repulses others.

"The human behavior behind any subculture interests me, but I think with insects and the collection of insects, because so many people are repulsed by this thing and so many people have so many adverse reactions to this collection, the film explores ... what can we learn about revulsion, do some people not have that, is that cultural?" Feldman said.

The film's anticipated release is fall 2019. Here's a newly-released trailer.

Since completing the documentary, Feldman said he's learning more about human's inherited, biological reactions to the way bugs move — which historically meant something dangerous or nutritious was afoot. He's talking about that jolt you get when a spider or silverfish skitters across the floor.

"I think I’ve gotten a little bit more comfortable being around (bugs)," he said. "But I’m not gonna start collecting them, I don’t think."