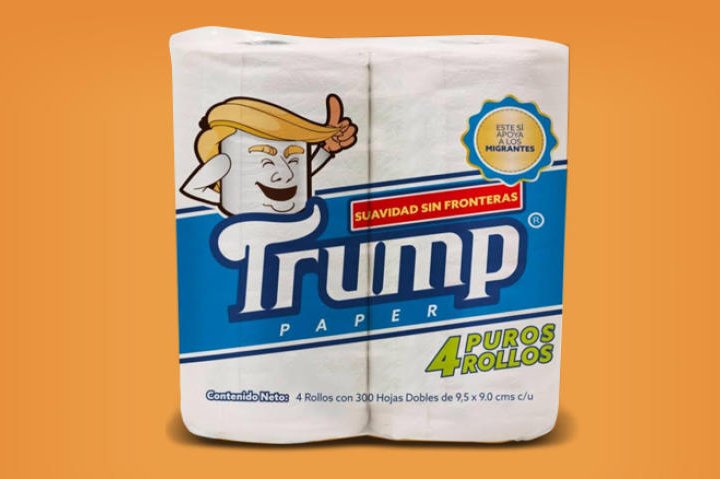 Mexican lawyer Antonia Battaglia has created Trump toilet paper, which he plans to put into production by late 2017. Thirty percent of proceeds will go to migrants from the United States now living in Mexico.

There are a lot of people out there who would like to use Donald Trump as toilet paper.

That dream has finally been realized thanks to Antonio Battaglia, a lawyer native to Mexico who has created Trump toilet paper and, in turn, one of the most head-turning memorabilia items to come out of the U.S. presidency. Battaglia will donate 30 percent of proceeds to migrants and deportees from the United States who now live in Guanajuato, Mexico.

Mexican business publication Expansión originally reported the news, saying Battaglia came to the idea out of irritation following Trump's bad hombres remarks during the election. “I was very annoyed and I started looking for a way to do something that had an impact, not in a tone of mockery or bad revenge, but in a positive way,” Battaglia told Expansión.

Battaglia himself grew up in Guanajuato and wanted to patent a product that would both raise funds for migrants and have a lasting market value. Coming from a family of shoemakers, his first instinct was to go for apparel, not for butts.

“I tried to register a brand of clothing or footwear because my family is dedicated to the production of shoes, and there I thought it was a possibility, but the ‘Trump’ brand was already registered,” he told Expansion. “Then came the idea of producing a toilet paper, a product that was ironic and that remained in the market for a good time.”

With toilet paper still fair game, Battaglia now intends to start production before the end of 2017 and have it in markets and supply chains across Mexico.

The prototype of the product shows an animated toilet paper roll adorned with a blonde Trump-esque wig on the packaging, giving a thumbs up.