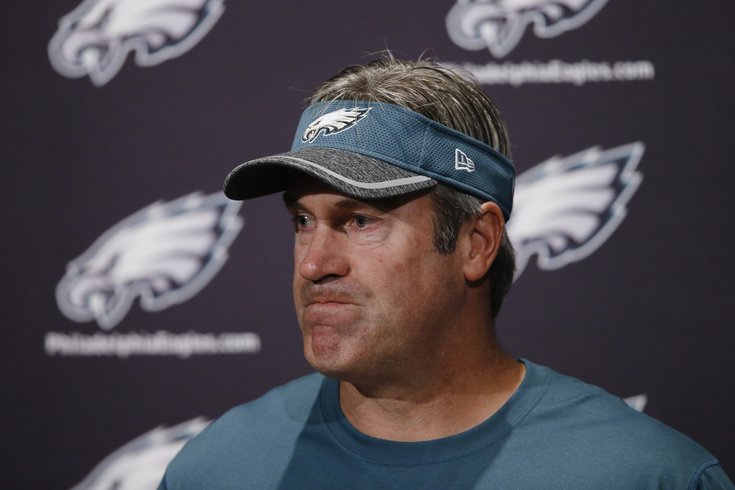 Doug Pederson hasn't coached a single game in the NFL, and he's already rated behind guys like the Tennessee Titans' Mike Mularkey and the Jacksonville Jaguars' Gus Bradley*, who own 18-39 (.316) and 12-36 (.250) career records, respectively.

In fact, in an NFL head coach power ranking, Pederson was ranked dead last by NFL.com's Elliot Harrison, with the following reasoning.

This isn't fair. Pederson hasn't so much as coached one game yet. But yeah, he offers no NFL head-coaching experience, like some other guys at the bottom of this list. Pederson got off to a rather inauspicious start with the Sam Bradford Start-gate. Of course, you can blame Pederson's assistants for the confusion regarding whether Bradford is the clear No. 1 or will have to compete for the top job. It does get more confusing, however, when the organization signs Pederson's guy, Chase Daniel, to big-time backup money. Seven mil per season is high for a dude who is supposed to be carrying a play chart on Sundays. It should be mentioned here that the front office put Pederson in a difficult position by moving up to draft Carson Wentz, given the two quarterbacks signed this offseason (one apparently told he was the starter, the other a favorite of the coach). We'll see how it goes.

Look, ranking shmanking. Nobody knows yet how Pederson or any of the other neophyte NFL head coaches will fare in their coaching careers, so to rank them is little more than a guessing game.

However, it's the explanation that comes with Pederson's ranking that feels odd. In regard to the Sam Bradford "start-gate" situation, dinging Pederson because he and his coordinators weren't on the same page for a day in regard to the public message on Bradford's starting status with the team is a little bit of a reach.

Far more importantly, Pederson was a key figure in diffusing the Bradford situation that actually mattered -- you know, the one where Bradford threw a hissy fit and went on strike after the Eagles traded up to the number two overall pick?

Pederson and Howie Roseman played that situation perfectly, stating repeatedly that Bradford would be welcomed back with open arms. Once the Denver Broncos didn't show enough interest to trade for Bradford, he had little recourse but to return to the team with a new realization of his value (or lack thereof), league-wide.

Soon after, the Eagles' three quarterbacks were basically singing Kumbaya together, exclaiming how great their quarterback room is.

Contrast that with the way Evan Mathis skipped voluntary practices a year ago. A pissing contest originated by Chip Kelly ensued, and yada yada yada, Mathis was cut and the Eagles got crappy play at LG all season.

In regard to the jigsaw puzzle the Eagles put together at the quarterback position this offseason, while it is understandable that their plan may seem imperfect to some (and it is), in an ideal realistic world, the best outcome for it in 2016 is as follows:

So... Dead last? Alright, I get it. Pederson wasn't exactly a hot name among teams on the head coaching search prowl this offseason, and yes, he's a newbie with plenty to prove. But his handling of the quarterbacks this offseason, which appears to be a heavy basis for his low ranking, is kind of nonsensical.

*You do have to love what Gus Bradley is building, or so I've heard.