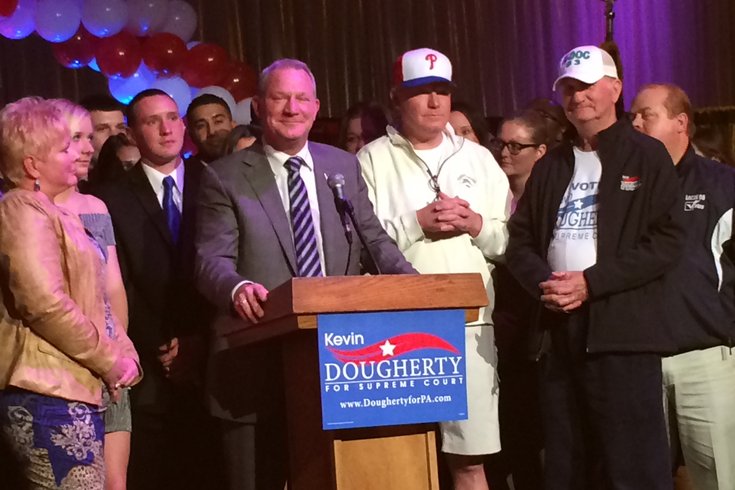 Newly-elected justice of the state Supreme Court, Kevin Dougherty, smiles on election night while he is surrounded by his family, friends and supporters.

Ushered in by fervent supporters waving enormous cutout signs depicting his face, South Philly's own Kevin Dougherty strode through a packed union hall on Tuesday night to announce that he had won the election for one of three vacant seats on the state's Supreme Court.

"In my heart and in my prayers, I wished for this moment," said a proud Dougherty, 53, surrounded by his friends and family.

A judge for the first judicial district of the Court of Common Pleas since 2001, Dougherty took time to note his opponents' campaigns, which he called "professional," and congratulate fellow Democrats, David N. Wecht and Christine Donohue, both judges on the state Superior Court, on their victories. They will join Dougherty as freshmen judges on the Supreme Court.

Yet, Dougherty noted that he did not achieve his victory alone. Dougherty comes from a politically well-connected family, with his brother, John "Johnny Doc" Dougherty, the long-time head of the International Brotherhood of Electrical Workers, Local 98 and soon to be head of the Philadelphia Building and Construction Trades Council, at his side.

But while he was introduced and led to the stage by his brother – who was dressed in shorts and a Phillies cap, a stark contrast to the judge's suit and tie – Dougherty told the gathered crowd that though he was proud of his family and his roots, the people of Pennsylvania elected an individual, not the Dougherty family, to sit on the highest court in the state.

"I've never been prouder to say that I'm Kevin – comma – brother of Johnny Doc," said Dougherty. ""But, Pennsylvanians, be sure, you've elected Judge Kevin Dougherty, not the brother of. You've elected an individual."

Dougherty and his fellow Democrats join a Supreme Court been plagued by scandals that cost two justices their seats on the bench: Joan Orie Melvin, who retired after she was convicted of campaign corruption charges, and former Justice Seamus McCaffery, who retired in the wake of the ongoing email scandal.

In his first order of business, Dougherty said, he'd like to show voters throughout the state that they elected a hardworking man who worked his way through college and will strive to support the "good and decent people of the Pennsylvania Supreme Court."

"I am not and I'll never be a politician. I am, and always will be, a public servant," promised Dougherty.