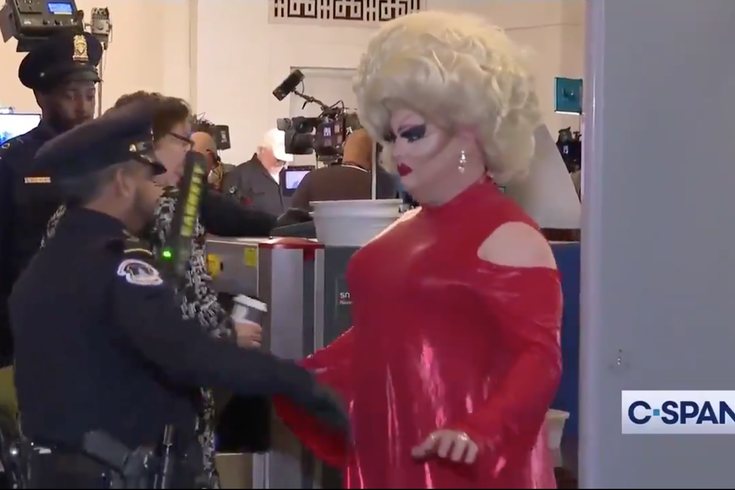 Pissi Myles, a New Jersey-native drag queen and the winner of the fourth cycle of Philly Drag Wars, stole the show and went viral at the first day of impeachment hearings.

Pissi Myles, a New Jersey-native drag queen, stole the show with a dramatic red dress and big hair amid a sea of buttoned-up suits and quaffed 'dos. Her appearance went viral online:

Someone did ask me last night if there’s anything in DC that surprises me anymore.

According to Myles' website, she's performed all over the Acela Corridor after graduating from Montclair State University in 2011. She won the fourth cycle of Philly Drag Wars, a long-running competition styled after RuPaul's Drag Race competition. (The competition's shows are currently held at Voyeur Night Club in Center City, with the next one scheduled for Nov. 22.)

According to the Asbury Park Press, Myles is on Capitol Hill this week covering the impeachment hearings for Happs News, a membership-based news organization which bills itself as "the world's first open-source newsroom" on its website.

Myles, known for being quick with a joke, offered a fittingly solid explanation for her appearance at the hearings:

"'It’s a crazy day in Washington! I’m flipping my wig over the high-energy proceedings today,' Myles told NBC News in its report on their appearance. 'Tensions are high, and the bar for who’s allowed in the Longworth House is very, very low.'"