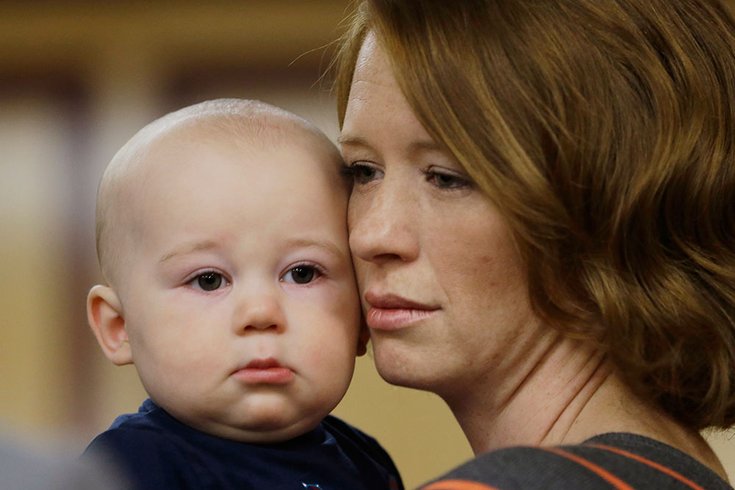 Jennifer Wonnacott holds her son, Gavin, 8 months, as she joins other mothers and children at a Feb. 4, 2015, news conference to show support for proposed legislation to require parents to vaccinate all school children in Sacramento, Calif.

Three public health researchers at Drexel University have said that scientists need to engage more with anti-vaccine groups and that they need to advocate for the pro-vaccine side more passionately in social and traditional media.

"Why is there a continuing gap between the public and the science? Is it that public health practitioners are not engaged with the public, or is the public not listening?" asked researchers Neal Goldstein, Michael LeVasseur and Jonathan Purtle, all of whom are affiliated with Drexel's School of Public Health.

The question, published as a letter to the editor in the January issue of Vaccine, came in response to a recent study on how vaccines are portrayed on Pinterest.

The study, published by Jeanine Guidry of Virginia Commonwealth University, found that three out of four "pins" about vaccines on the social media website are negative. The finding is particularly significant since Pinterest is popular with young mothers.

"As three young researchers we feel that the onus falls partly on us" to create a dialogue, the Drexel scientists wrote.

"The anti-vaccine messages of today threaten to detrimentally influence public opinion, vaccination policy, and public health. Do we continue to bombard the scientific community with more literature, or lambast the anti-vaccinating public by citing more data?"

Scientists should use social media and the popular press to "engage anti-vaccination groups and inquire about their proposed alternatives," the trio said.

There's a precedent for scientists acting as social activists, they argued, especially during the AIDS crisis of the 1980s.

"Through successful activist organizations, like ACT-UP, policy was influenced and scientists broke ranks with the establishment to join in. This resulted in discovery of the virus, first generation antiretroviral drugs, and mitigating further stigma," wrote the researchers.