Drexel study: Now is a 'helluva time to sell' your home in Philadelphia

“Philadelphia’s housing market not only continued its recovery this quarter, but aggressively put the (pedal) to the metal.”

That's a shot of bittersweet news from a new report by Drexel University’s Lindy Institute and its Senior Research Fellow, Kevin Gillen.

In terms of economics, the Philadelphia housing market is a classic case of high demand and low supply, pushing the appreciated value of houses up 6.2 percent in the second quarter – almost five times the national appreciation rate of 1.3 percent. 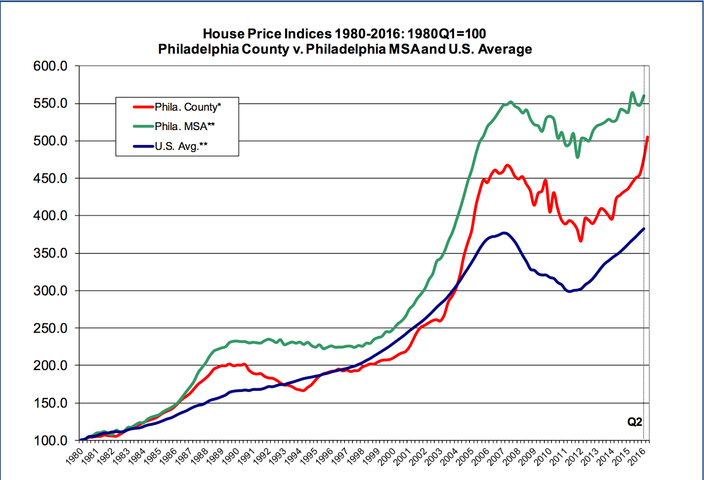 This graph produced by researchers at Drexel University shows the upward trend of home prices in Philadelphia since 1980.

The report comes a time when Zillow, an online real estate database website, recently upgraded its annual forecast for Philadelphia homes prices from 2.2 percent to 2.9 percent, and changed its market temperature for Philadelphia from “Hot” to “Very Hot," according to the report.

The combination of low inventory and high demand means a new home on the market sells in an average of 53 days, the fastest pace since 2006.

But this is not necessarily all good news.

Housing prices in Philly are rising faster than people’s incomes, so people have to use more of their money for a home or delay homeownership. The lack of supply is negatively impacting first-time and low-income homebuyers the most, which is reflected with the biggest price gains in lowest-priced and lowest-income neighborhoods of North and West Philadelphia, according to the study.

“Ever since the housing bubble burst nearly 10 years ago, potential homebuyers have been told that it’s a great time to buy a home. But for the first time in 10 years, it now looks like a helluva time to sell one.”