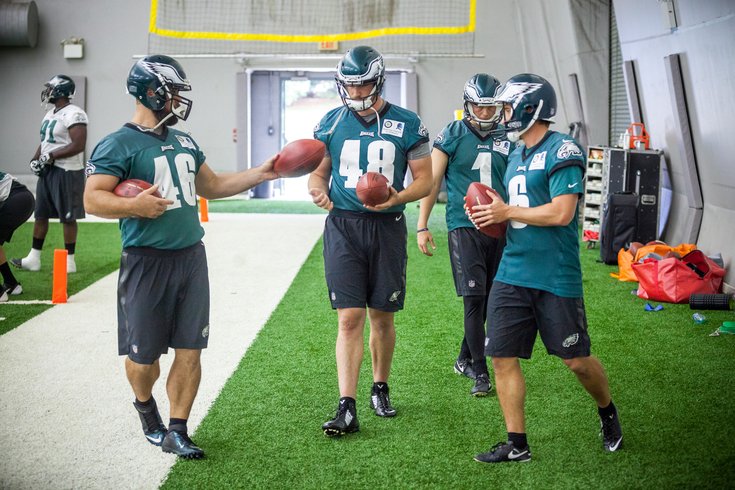 And finally, we wrap up our training camp previews with the specialists, where there is actually one semi-intriguing roster battle. That would be Cody Parkey vs. Caleb Sturgis.

Let's look at each of the specialists individually.

The Eagles looked like they might be screwed at kicker prior to the 2014 season, when Alex "Noodle Leg" Henery was battling it out with Carey "Murderleg" Spear. Remember that debacle? Good times.

When it became abundantly clear that Henery just wasn't going to be a competent kicker, the Eagles traded RB David Fluellen to the Indianapolis Colts for Parkey, which ended up being a steal. Parkey made 32 of 36 field goal attempts, and connected on all 54 of his PAT attempts. He made the Pro Bowl as a rookie.

In 2015, Parkey played in just three games and was placed on IR after tearing multiple muscles in his groin.

In fairness, Parkey did have the opportunity to watch greatness at the Eagles media field goal kicking competition before he got hurt. (I won that competition last year, and I'm going to win it again this year).

So Parkey has that going for him.

After Parkey was injured last season, for the second consecutive year, the Eagles were left scrambling to find a kicker. They settled on Sturgis, AKA "Power Sturge." In his first game against the Redskins, Sturgis missed a 33-yard field goal, as well as an extra point. The Eagles lost by three. A month or so later, Sturgis missed a 32 yard field goal against the Dolphins in a game the Eagles lost by one point.

As Andy Reid would say, "We can all count. Those points would've helped."

Still, on the season, Sturgis was 18 of 22, which is better than what the Eagles could have hoped for after being forced to sign a kicker three weeks into the season. But certainly, Parkey was the more accomplished kicker of the two.

In the past, I used to look at all of Dorenbos' punt snaps each season. I'm less psychotic these days, so I've stopped doing that. There are some who think Dorenbos has never had a bad snap. They ware wrong. In fact, in 2012, Dorenbos had a really bad season. He was far better in 2013, and I can't recall anything particularly egregious in 2014 or 2015.

Dorenbos has competition this season in John DePalma. I watched DePalma for a bit during OTAs and minicamp, and can say fairly confidently that Dorenbos' roster spot is safe ... unless, you know, Dorenbos' newfound celebrity goes to his head.

Donnie is running unopposed in camp this year, because Donnie J'owns. It's somewhat noteworthy that Jones fired agent Drew Rosenhaus, then hired David Dunn, fired Dunn, and then hired Ken Harris. That could signal that Jones is looking for a new deal, which makes sense seeing as he's arguably a top five punter but is only the 15th-highest-paid punter in the NFL.