Eagles 53-man roster projection at the start of training camp 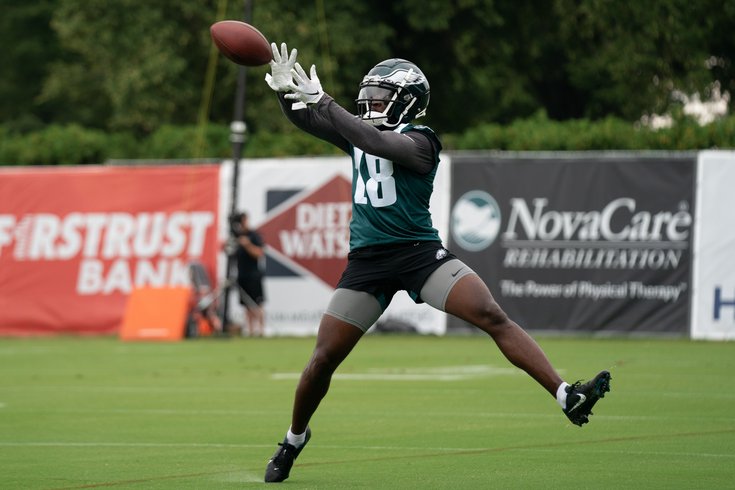 We usually publish a 53-man roster projection at the start of Philadelphia Eagles training camp, and while we're a day late, better late than never, I guess.

Minshew was the subject of trade speculation earlier this offseason, but when the Eagles substantially improved their roster Minshew's value as a backup on this potentially contending team grew. He's very likely not going anywhere.

The Eagles also have Reid Sinnett, who occupied a roster spot down the stretch last season, and Carson Strong, a Day 2-worthy talent who did not get drafted because of major injury concerns. Strong feels like a candidate for the No. 2 job in 2023, but for now, he makes sense as a well-paid practice squad stash who must show his knee can hold up.

Strong's ticket to the 53-man roster will have to come via the preseason games. If he plays well, the Eagles may have to just keep him instead of exposing him to waivers.

The Eagles lack a bigger between-the-tackles banger like they've had with Jordan Howard the last few years. They could certainly add one before the season begins, whether that's Howard or somebody else. Another candidate for a fourth running back roster spot is undrafted free agent Kennedy Brooks.

And then there's Jason Huntley, who is one of the fastest players on the team, and a guy who has shown some juice both in practice and when he has gotten opportunities in games. He is also the best kick returner on the team. But for some reason, it hasn't yet translated to a regular spot on the 53-man roster. If it were up to me (it's not), he'd make the roster.

A quartet of Smith, Brown, Watkins, and Pascal actually looks pretty good! They're the clear 1-2-3-4 options at wide receiver.

The question is whether the Eagles can sucker some team into giving up anything of value at all for Reagor. Cutting him would result in an almost $8 million cap hit. I can't see that happening, but a trade would be less financial pain.

Greg Ward could also continue to stick on the roster because he's a high character player who can do a lot of little things, but is a standout at none. That'll be easier to justify if the Eagles can deal Reagor.

The other two guys to watch here are Britain Covey, a slot receiver with some return ability, and record-breaking hurdler Devon Allen.

Calcaterra is a better receiver than Stoll, and Stoll is a better blocker than Calcaterra. They could perhaps be TE2a and TE2b, in whatever order you prefer.

Tyree Jackson is a player the Eagles would also like to continue to develop, but he's likely to miss most or all of training camp as he recovers from a torn ACL. He's currently on the PUP list, and if he can stay there into the regular season that would be ideal.

As for J.J. Arcega-Whiteside's "transition" to tight end, he was pretty much a tight end last year. Credit JJAW for doing anything necessary to help out the team by willingly changing positions, but I'm not buying that this is a career-saving move.

And then as always, Richard Rodgers just lingers around. He is also on the PUP list, but could be added to the roster at some point this season in case of emergency.

The Eagles might have the best offensive line in the NFL, and beyond their top five guys they're also very deep. It shouldn't be a surprise for them to go heavy here.

Dillard is very clearly available for trade, but the Eagles won't just be giving him away. I think it would take a Day 2 pick in 2023 for them to deal him.

Jack Anderson was one of the harder cuts to make in this exercise. He's probably my 54th guy. It's just hard to fit in 11 offensive linemen.

Graham has returned from his Achilles tear, and he says that he is a "full go." Beyond Graham, the Eagles will hope that Sweat can continue to improve as a pass rusher, and Barnett was a surprise return after a dreadful 2021 season. Jackson appeared in every game in 2021, playing 253 snaps during the regular season, and 15 snaps in the playoffs.

There are no intriguing names left off of this positional group.

The decision to bring Cox back at $14 million instead of spending that money elsewhere was an odd decision in an otherwise strong offseason by Howie Roseman. If you can look beyond that questionable allocation of resources, the Eagles do at least have an outstanding quartet of defensive tackles in Hargrave, Cox, Davis, and Williams, even if they're overpaying for that group.

Tuipulotu was a 2021 draft pick, and will be given every opportunity to stick as a fifth DT.

Reddick will give the Eagles some extra juice as a pass rusher. We'll list him here with the SAM linebackers, and while he may drop into coverage on some rare occasions, make no mistake — the Eagles paid him to get to the quarterback.

Will the Eagles only keep a single dose of Johnson and Johnson, or can they keep both? For now, we'll guess that both Johnsons stick.

The Eagles could go heavy at cornerback, since they have added so many young ones over the last year or so. Here I kept Gowan and Vincent over guys like Josiah Scott and Jimmy Moreland. This is the hardest position to predict before camp has really even gotten underway. We'll have to see which younger corners make a case that they should make the team, unlike at other positions, where we pretty much already know who likely will.

The arrival of Tartt is a bad sign for K'Von Wallace. If there's a position the Eagles add to as camp moves forward, it could be safety.

The Eagles appear to be content to run it back with Siposs, for now.