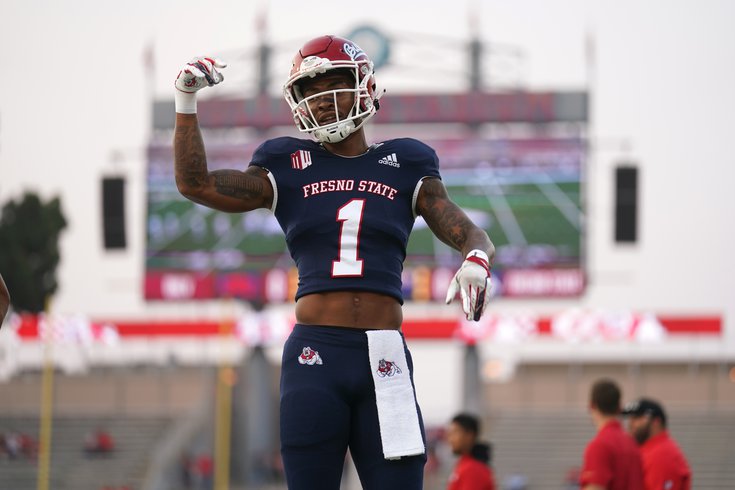 The Philadelphia Eagles added a pair of wide receivers on consecutive days. They were undrafted rookie free agent Keric Wheatfall, and Josh Hammond, who the Birds claimed off of waivers from the Jacksonville Jaguars.

Wheatfall (6'1, 194) was invited to try out for the Eagles during a recent rookie minicamp, and he impressed enough to earn a UDFA contract.

The Athletic's Dane Brugler had Wheatfall rated as the 200th best wide receiver prospect during this draft cycle. He ran a 4.56 40 at his pro day. A scouting report, via Tony Pauline of ProFootballNetwork:

Positives: Sure-handed receiver coming off a terrific senior season. Uses the sidelines well, settles into the open spot of the defense, and displays strong hands. Tracks the pass in the air, makes the difficult over-the-shoulder reception, and shows excellent focus. Uses his frame to shield away opponents or his hands to separate from defenders.

Negatives: Plays to one speed and lacks the second gear. Has a limited route tree. Marginally productive at Fresno State.

Analysis: Though never super productive, Wheatfall displayed consistent progress in his game and comes with an upside. He’s worth keeping on a practice squad this fall with the possibility of future development.

You can find some highlights here (explicit lyric warning on the background music).

As noted above, Hammond (6'0, 194) was claimed by the Eagles off of waivers from the Jaguars. Any time the Eagles add a player from Jacksonville, we're legally obligated to note that former Jags GM Dave Caldwell now works for the Eagles. There's also a connection between Hammond and Eagles quarterbacks coach Brian Johnson, who was Florida's quarterbacks coach for two years during Hammond's college career.

Caldwell signed Hammond out of Florida as an undrafted free agent following the 2020 NFL Draft. At Florida, Hammond had 87 receptions for 1138 yards (13.1 YPC) and 6 TDs over a 40-game college career. He appeared in two games for the Jaguars in 2021, but only played 13 snaps in the regular offense and did not post any stats.

The Eagles now have 12 receivers on their roster.