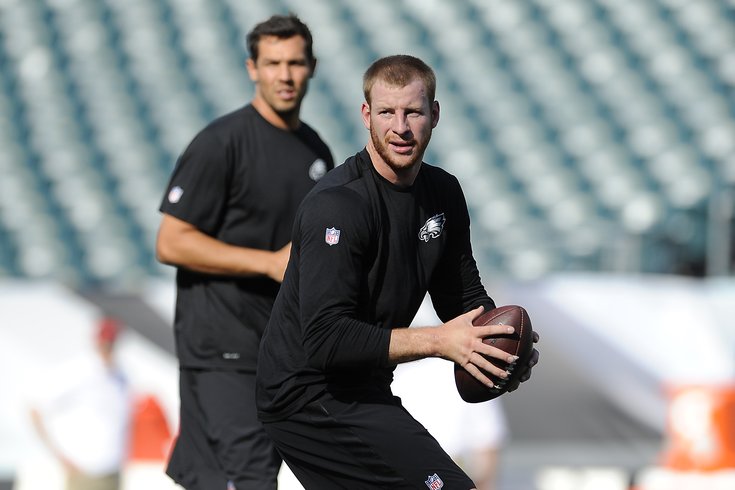 Sounds like Alshon Jeffery is a Carson Wentz fan.

Not long after ESPN's Josina Anderson reported that former Bears wide receiver and prize free agent Alshon Jeffery was leaning toward picking the Eagles, Ian Rapoport of the NFL Network reported on air that the Minnesota Vikings were making a late but aggressive push to sign the 27-year-old receiver.

In the end, Jeffery not only opted to sign with the Birds, but he also turned down a better offer from the Vikings because he like the prospect of playing with quarterback Carson Wentz, Rapoport later added.

Alshon Jeffery turned down a multi-year deal with more security from Vikings, but he is betting himself long term with the Eagles and Wentz

Jeffery could've had more longterm security in Minnesota. But like the Eagles late last offseason, he preferred to tether himself Wentz over Sam Bradford. Furthermore, the status of Teddy Bridgewater is still relatively unknown, and with Bradford on a short-term deal, there's really no guarantee of stability with the Vikings.

Instead, it will be a one-year show-me deal for Jeffery and it will cost the Eagles $14 million. It's low-risk for both sides, and certainly makes sense from the player's perspective.

With Wentz, there's a much better chance at that stability given what he's shown so far. And if things go well in 2017, Jeffery can decide to stick around and be a part of it by re-signing with the Birds.

Worst case scenario, it doesn't work out, and Jeffery will again be able to sign wherever he wants. Had he instead signed with the Vikings and quickly found himself unhappy, he wouldn't be able to get out quite so easily.

Oh, and one last thing. Howie Roseman pretty much called this last week. Here's what he said at the Combine regarding Wentz and free agency:

“First, in free agency, money does talk. There’s no question about it," Roseman prefaced. "But, having a guy who people want to play with – and we’ve had that before – having a quarterback that people say, ‘I want to play with that guy; I want to build around that guy,' that’s huge for you from a recruiting perspective. If things are close or even, and people see that there’s kind of this opportunity to build chemistry with a guy over a long period of time, we think that will help us as we recruit players.”

Think about how important that Sam Bradford trade was. Not only did the Eagles get a first-round pick and allow their rookie QB to get a year of experience under his belt, but it also allowed Wentz to show prospective free agents what he could do.

On Day 1 of free agency, that's already paying off in a big way.