Week 15 NFL picks: Rounding up the experts' predictions for Eagles vs. Cardinals 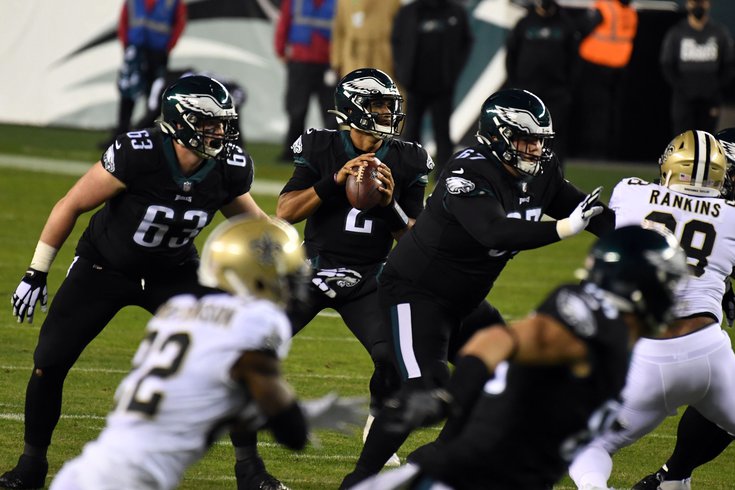 The Philadelphia Eagles will play the Saints again in 2021.

On Sunday, the Eagles will visit the Arizona Cardinals as Jalen Hurts makes his second NFL start — and it will potentially be a big one for the rookie quarterback. That's because by the time the Eagles take the field on Sunday, they should have a good idea whether they're playing for their postseason lives or not.

A Washington win coupled with an Eagles loss would officially eliminate Philly from playoff contention with two games left to play. A Washington loss however (plus a Giants loss), and the Eagles could find themselves just a half game off the division lead with a win over Arizona. And, with a Week 17 home matchup against Washington still left on the schedule, the Birds would technically be in the driver's seat in the NFC East.

There are a lot of different ways Sunday could play out. But if the Eagles hope to make the postseason for the fourth straight year and become the first repeat NFC East champion since winning four straight from 2001-04, then it starts with them taking care of business against the Cardinals. As six-point road underdogs (according to TheLines.com), that's easier said than done.

But hey, they pulled off the upset against the Saints last week. And we barely found anyone predicting that result. This week, the expert picks are still slanted toward the favorite, as expected, but the Birds are definitely getting more respect.

As we do every week, let's take a look at who the local and national media are picking to win this battle of the birds...

• PhillyVoice staff: We all made the mistake of underestimating Jalen Hurts and the Eagles last week against the Saints. Guess, what? We didn't learn a damn thing. All seven of our writers are picking against the Birds again this week. Here's what yours truly, who sees a 28-23 win for the Cardinals, has to say...

I have the Eagles covering the six-point spread against the Cardinals, but that's largely due to the "unknown" factor. We've only seen about six quarters of Jalen Hurts, so it's difficult to know what to expect out of the Eagles offense. But that works both ways, as the Cardinals are also working off limited scouting material when it comes to Hurts. If Doug Pederson sticks to a similar gameplan as he had against the Saints — after all, if it ain't broke... — then it's not hard to see the Eagles keeping this one close.

Once again, just like it did last week, Sunday's game is likely going to come down to how the Eagles defense performs. If they're able to play like they have for the majority of the last month and a half, then it should remain a tight game. Of course, mobile quarterbacks have caused the Eagles some problems this year. They acquitted themselves nicely against Taysom Hill last week, but calling him a quarterback is generous. Murray is not only faster and more elusive than Hill, but he's also a better passer. And he has DeAndre Hopkins. Against an Eagles secondary that might be without three starters, that could spell disaster for the Birds, no matter how well Hurts plays.

• Inquirer.com: Three of their four Eagles writers are picking Arizona. Here's more from Les Bowen, who is predicting a 26-21 win for the Cardinals.

This Eagles season really comes alive for me again if Jalen Hurts and the Eagles go out to Arizona and win, at a stadium where they have never won in four trips, including the NFC Championship Game following the 2008 season.

I don’t really expect that Sunday. Though the run game (sparked by Kyler Murray’s 712 yards on 115 carries) powers the Cards’ offense, their wideouts are DeAndre Hopkins, Christian Kirk and Larry Fitzgerald. The Eagles’ secondary is extremely depleted. We know Rodney McLeod and Avonte Maddox are out. Signs are encouraging for Darius Slay,, but he hasn’t completed the concussion protocol.

Also, not a fan of Matt Pryor vs,. Haasan Reddick, though the Cards’ defense overall has been up and down. They’ve allowed 30 points or more five times, once more than the Eagles. You would never have known that from last week’s 27-6 victory at the Giants.

I think the 6.5-point spread is pretty generous, though, given that Arizona is 7-6.

• NJ.com staff: Five of their six writers are picking the Cardinals. Here's more from beat writer Mike Kaye, who among those predicting an Eagles loss.

With a banged-up secondary, the Eagles are in for a world of hurt against Kyler Murray, DeAndre Hopkins, Christian Kirk and Larry Fitzgerald. While Jalen Hurts will impress for a second straight week, the defense just seems to be in a really bad spot in this matchup. After this loss, the Eagles’ playoff hopes will be pretty much sunk.

• Bleeding Green Nation staff: Four of their nine writers are picking the Eagles to pull off the upset.

• ESPN staff: Each of their nine NFL experts are picking Arizona.

The Eagles had their best offensive game of the season, by far, in Jalen Hurts' first start. It came against one of the top defenses in football. And for some reason, the focus in Philly seems to be on finding ways not to hurt Carson Wentz's feelings. If the Eagles' offensive line and secondary weren't newly destroyed by injuries, I'd pick the Eagles to win this game and make life truly chaotic in Philly.

• CBS Sports staff: Seven of their eight writers are taking the Cardinals this week, including Pete Prisco, who sees a 30-21 win for Arizona.

Jalen Hurts will start his second consecutive game for the Eagles at quarterback, but this will be his first road start. The Cardinals came alive on defense last week against the Giants, and I think that pass rush will show up again. Hurts can't duplicate his victory from last week as the Cardinals win a a second straight game.

Kyler Murray faces Jalen Hurts, the guy who replaced him at Oklahoma. It could get interesting, it should be fun. The Cardinals should find a way to win.

Jalen Hurts at quarterback gives the Eagles a chance, but I’m not sure Philadelphia’s defense matches up well with Kyler Murray and the Cardinals’ offense.

• USA TODAY Sports staff: One of their seven NFL experts is picking the Eagles to pull off the upset.

• SB Nation: Six of their nine experts are picking the Cardinals over the Eagles.

Have the Philadelphia Eagles tapped into something special with new starting quarterback Jalen Hurts? Did we really just write that sentence about a rookie second-round pick who entered the year backing up a $32-million-per-year former MVP candidate?

That's 2020 for you, and it's even more 2020 that the majority of our writers are backing Hurts and the four-win Eagles as a mere six-point road underdog against an Arizona Cardinals team that was the cat's pajamas earlier this fall. ...

The Cards did smoke the Giants last week, but their performance arguably wasn't as crisp as the final score might indicate, and the G-Men barely showed up for that game. For an Arizona team that would have been riding a five-game losing streak before Week 14 if not for a Hail Mary against Buffalo, a matchup with a potentially galvanized Philly squad could be a different story.

Remember, the Eagles lost Wentz late in 2017 and 2018. They went on to win the Super Bowl the first year and still won a playoff game the second year. This is an experienced and resilient team, and Arizona's run defense has indeed been vulnerable, which could take some pressure off Hurts in the pocket.

Maybe Kyler Murray takes over this game, maybe the Cards take advantage of a full start's worth of tape on Hurts, and maybe we get proof Sunday that Philadelphia's Week 14 performance was a fluke. But six points is still a lot to drop in favor of an Arizona team that was crashing and burning before running into the Giants.

• Sheil Kapadia, The Athletic:  Sheil makes his picks against the spread and this week he's picking the Eagles to cover, but the Cardinals to win the game.

What stood out the most with Jalen Hurts in his first start was his poise. This is admittedly random, but he became the second quarterback in the last five years to produce 100+ rushing yards in a game without taking a sack. Hurts’ short-pass accuracy was very good and resulted in the Eagles setting a season-high for yards after the catch. For the most part, Hurts avoided negative plays and knew when to throw the ball away. The Eagles’ biggest issue this week is they’re banged-up in the secondary. That could mean big trouble against DeAndre Hopkins. The Cardinals currently occupy the last playoff spot in the NFC. They win, but the Eagles keep it close.

Can Jalen Hurts lead the Eaglesto a last-minute NFC East championship? Hurtsoffers an element tothe running game, and that should lead to a fun back andforth with Kyler Murray.If Philadelphia protects the football, then it will have a chance.

Jalen Hurts gets another start after his spectacular rushing and strong passing effort in the win over the Saints. This isn't a bad first road start for the rookie, on the opposite side of the QB he replaced at Oklahoma, Kyler Murray. The Eagles' defense comes in hurting while Murray is back fully healthy. Both former Sooners will be motivated to put on a show in the desert. The Cardinals have the more reliable playmakers around their quarterback, and that makes the slightest difference.