Vote: Anyway, who would you support in that primary?

Philadelphians – a few of them, at least – will go to the polls on Tuesday to vote for their preferred candidates in a number of primary elections.

Let this paragraph serve to amplify a common refrain: Please go vote for your preferred candidates on Tuesday wherever you may live. It is the righteous American thing to do.

But this post isn’t about voter-turnout shaming. Nope, it’s about a picture that election inspector Ryan Godfrey – he of having debunked a Sean Hannity’s 2012 election conspiracy theory – posted from Saturday morning’s election-board training at South Philadelphia High School.

For the past six weeks, under the aegis of the City Commissioner's office and election board, primary day officials are getting a refresher course on doing their jobs properly. (Attendance at these sessions is mandatory for an estimated 4,000 election-board workers; it’s the difference between getting paid and not getting paid.)

Part of that training involves sample ballots in voting machines. One race in those sample ballots taps into a heated battle amongst the city’s football fanbase.

As you may recall, the Philadelphia Eagles defeated the New England Patriots by a score of 41-33 in Super Bowl LII. Six of those points were memorably chalked directly up to quarterback Nick Foles catching a touchdown pass. Remember that, Philly? It was special alright. Let's watch it again!

As you may also recall, Foles was only in the game because starting quarterback Carson Wentz had gotten hurt in the regular season. That was not special at all. It was as tragic as sports-specific matters can be considered tragic.

But still, Wentz supported Foles like any good teammate would. Now, though, the sports-talk debate is whether Wentz will return to the starting lineup at the start of next season’s title-defense campaign.

Enough about that. This is about elections. Specifically, the sample ballot for U.S. Senator (Democratic primary).

Incumbent Bob Casey is not listed there. Nope, for training’s sake, it’s a Wentz vs. Foles primary. We know this because of a tweet from Godfrey, the inspector of elections for Ward 46, Division 17 in West Philadelphia.

“Trainers didn’t make a big deal of the sample ballot,” said Godfrey. “You only noticed who was on it if you examined the machines afterward.” 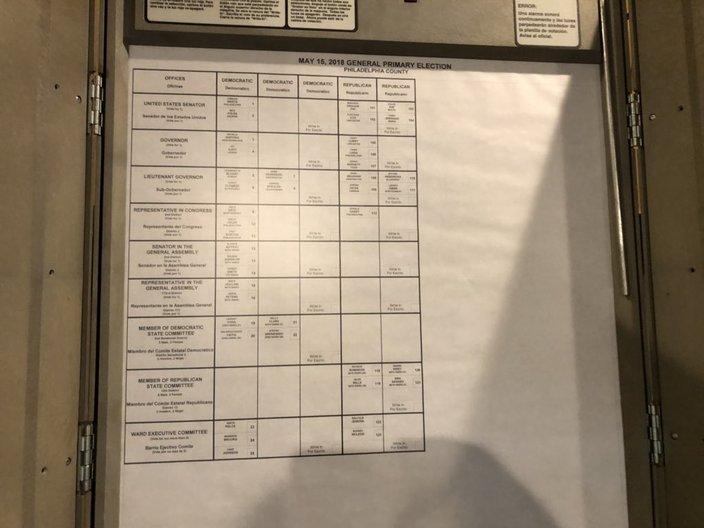 Atop this sample ballot is a U.S. Senate primary between Eagles quarterbacks Carson Wentz and Nick Foles.

We’re happy he did. The revelation led PhillyVoice to call City Commissioner Al Schmidt on a Saturday morning for some edification.

"That's ours alright," he said after seeing the photo, which is much clearer in Godfrey's tweet.

No, we all didn’t miss the Eagles quarterbacks declaring their intentions to battle over a seat on Capitol Hill.

Schmidt explained that they use recognizable names on sample ballots, most commonly at events for children.

“Sports figures, superheroes, names like that,” he said, noting that this happens at a time before ballots are officially set. “There was one in the general (election) when it was the offensive line against the defensive line. I’m not sure which was Republican or Democrat.”

WHO YA VOTING FOR?

That explains why Foles and Wentz were on the ballot. But it got us to thinking: Who would make a better U.S. Senator out of the two.

Cogent arguments can be made for both, setting aside residency requirements and the like. Me? I’d vote for Foles.

Wentz is young. He’s not faced much adversity. He's still, so to speak, green in the ways of the world.

Meanwhile, Foles has had a rollercoaster career. He’s pondered his professional mortality and came back stronger than ever, reaching the mountaintop on behalf of his constituency. He’s battle tested and has our best interests in heart.

That’s just one vote, though.

Embedded below is a Tweet containing a poll. Please vote in it so we can bring some much needed closure to a ballot that wasn’t meant to be seen outside the prism of election-board training.

In a hypothetical U.S. Senate primary, who would get your vote?