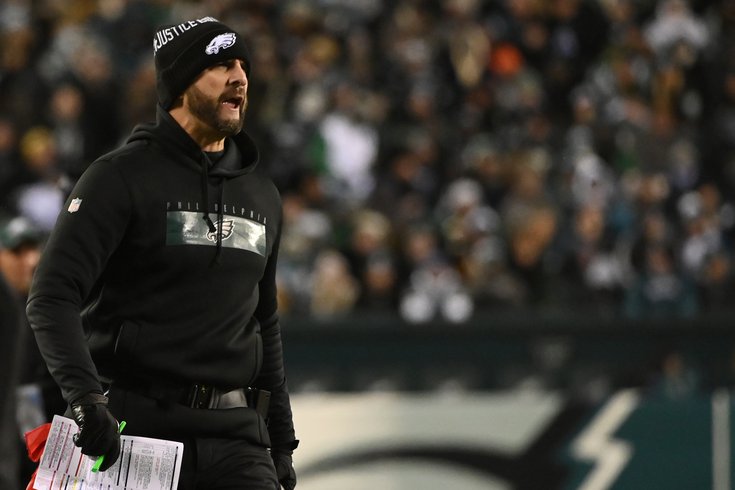 The Eagles' backups hung around for a bit against a Dallas team with more to play for, but the Cowboys would eventually put them away in a 51-26 blowout.

Here's what I saw, along with some big picture stuff since this game didn't really mean anything to the Eagles.

• Milton Williams showed up to this one like it was a do-or-die playoff game, something that should further endear him to Eagles fans given the team they were playing on Saturday night. The Eagles moved him around the line at times against the Cowboys, and Williams was one of the few guys able to make a positive impact on this game for the defense, pressuring Prescott and even making some Cowboys players mad with a little scrap in the first half.

Throughout the year, Williams has been able to assemble a decent collection of impact plays without having a ton of playing time to make them, and if you're looking for a potential breakout candidate down the road, he's a good guy to bet on. The physical tools pop when he's on the field, and he has some nastiness to his game up front. That's a good combination.

• Jason Huntley feels like an unlikely candidate to even dress for their playoff game, but he offered excellent versatility in spot duty this week, showing juice in the kick return game and wiggle as a running back, serving as a capable second option behind Kenneth Gainwell.

• Whatever you think of their chances in a playoff game/playoff run, Nick Sirianni deserves a healthy dose of credit for the Eagles turning their season around and building a cohesive identity over the course of this season. Thanks to a combination of the on-field product and hyper-scrutinization of his press conferences, there were plenty of people who thought this guy was a total bozo unfit for the job. Instead, he's the head coach who figured out a way to get around roster problems and return the franchise to the playoffs.

A skeptic could say that the majority of the fanbase wanted what Sirianni eventually gave them (a run-heavy team) from the beginning, but there are countless examples of coaches across sports stubbornly refusing to change their approach even when it leads them down a losing path. Instead of joining that club, Sirianni showed the flexibility and open-mindedness to pivot from their initial plan and capitalize on the advantages they do have as a group, controlling the clock and the game on the ground while taking care to blend in more under-center offense as the year wore on.

Philadelphia's second-half dominance throughout this year is at least partially due to the opponents they played, but Sirianni and defensive coordinator Jonathan Gannon still get their share of praise for consistently getting the best out of their team after halftime, making the changes and adjustments necessary to flip games even after they started slowly. Some of that comes down to getting better quarterback play in a lot of second halves, no doubt, but this is a group that has proven to be mentally tough as a whole, and you have to imagine the culture of belief Sirianni has promoted has something to do with that.

• While we're on that subject, it feels important to note that the on-field leaders for Philadelphia have been great this season, because the trajectory of this team likely looks much different with less impactful and charismatic leaders in the locker room. For whatever his warts are as a passer, Jalen Hurts is a guy teammates rally behind and believe in when the chips are down, trusting he is going to do whatever it takes to get them a win. And with vets like Jason Kelce, the Eagles never found time to feel sorry for themselves this year, even when critical vets like Brandon Graham went down early in the season and left huge holes for the rest of the team to make up for.

Culture and character can't completely make up for talent and execution. But those qualities can buy you time to get things right, and the Eagles managed to find a winning formula even when it looked like a lost cause.

• The high-profile disappointments in the receiving core have probably not allowed us to appreciate the Quez Watkins experience as much as we probably should. Howie Roseman managed to snag a legit contributor at the position in the sixth round of last year's draft, and the more important thing is he gave all of us something positive to watch on offense Saturday night, serving as one of the lone standouts in their win over Dallas.

His touchdown did not do anything to change the impact of this game, but it felt fitting for the offense’s year to end in the hands of Watkins, who managed to take one to the house in the game’s waning moments to (sort of) save face in a bad second half.

Here’s hoping we see him pop up plenty in the playoffs.

• You can put a lot of stats in front of me to suggest that the Eagles' defense is built to help them win playoff games, and nothing we saw on Saturday night matters in any way thinking about that evaluation. It's just hard to trust a group that has played mostly the same way regardless of who they're playing against all year, especially when you consider the numbers they gave up to every good quarterback they've played this season.

The most likely playoff opponents coming into Saturday night were the Tampa Bay Buccaneers, who feature the greatest quarterback in the history of the sport, and the Los Angeles Rams, who a guy who is on the verge of being the first receiver since 2005 to lead the NFL in receptions, receiving yards, and receiving touchdowns during the same season. Rushing four guys and hoping the secondary can get the job done is a fine strategy against quarterbacks like, I don't know, Teddy Bridgewater and Trevor Siemian, not so much when you're playing teams who excel throwing the football and want to spend long stretches of the game attacking you through the air.

If they keep points off of the board and continue to play opportunistic football, maybe it won't matter. But we're going to see right away what this group looks like against a real passing attack, and it might not be pretty.

• JJ Arcega-Whiteside was not going to rewrite his Eagles resume with a good game against the Cowboys on Saturday night, but he had a chance to at least make this game interesting, a golden opportunity to haul in a touchdown to cap a great third-quarter drive. Instead, he added to the list of lowlights he has created over the years in Philadelphia, and this was perhaps his worst single play yet, with Arcega-Whiteside failing to even touch a ball with his hands despite it falling right into his lap:

Seriously, it's almost impressive in a perverse way that a person whose entire job is to catch footballs could manage to outright whiff on that play. It was more difficult for him to miss the ball altogether than it was to either complete the catch or drop the ball after tipping it with his hands. This guy keeps finding new ways to disappoint, even after so many people have basically written him off as an NFL player.

Funny enough, when Arcega-Whiteside did get his hands on a pass early in the fourth quarter, he managed to tip it up enough for the Cowboys to intercept it, so perhaps he should stick to the completely whiffing thing moving forward.

• I wish I could sit here and wax poetic about what this game means, what it shows heading into the playoffs, or why it's a total disaster that the Eagles got blown out. But the truth is, this game meant absolutely nothing and showed absolutely nothing that we can use to project, unless you think Dallas' starters crushing a bunch of backups and practice squad players means anything. I hope you spent your Saturday night doing almost literally anything else.

• Somebody please get Arryn Siposs in order before the playoff game. Unplug him and then plug him back in if that's what it takes. He was wretched against the Cowboys.

• Very unfortunate to see Tyree Jackson suffer an injury early in the fourth quarter after scoring his first career receiving touchdown early in the night. Jackson was visibly frustrated on the sideline after the play, eventually walking to the locker room to get a further evaluation, and none of that bodes well for his availability moving forward. Best wishes to him.

• Corey Clement scoring a touchdown for the Cowboys against the Eagles just feels wrong. Good for him taking advantage of a chance to play and shine, obviously, but it was a little bit icky seeing him prance in for six with a star on his helmet.

• The Apple Watch commercial featuring a series of 911 calls is easily my least favorite commercial in recent memory and I can't wait until I don't have to hear it anymore. Listening to people frantically explain their emergencies as a means to sell a tech product sucks ass. Go back to the weird silhouette commercials you used to sell the iPod, or do almost literally anything else other than this.

• There were a lot of Eagles fans on social media trying to mock the Cowboys for enjoying what turned into an easy victory over a hated rival. I get it, there's nothing that Dallas proved by carving up an undermanned Eagles group that they couldn't pull away from as soon as you might think. But what is Dak Prescott supposed to do, sit out there with a stone face and be miserable playing football? What kind of weirdo behavior would that be? I hate that I have to take the side of the Cowboys in any context, but these guys are playing sports. If the Eagles had put the practice squad for an Arena Football team on the field, it doesn't change the fact that scoring touchdowns is fun. Grow up, you joyless humps.