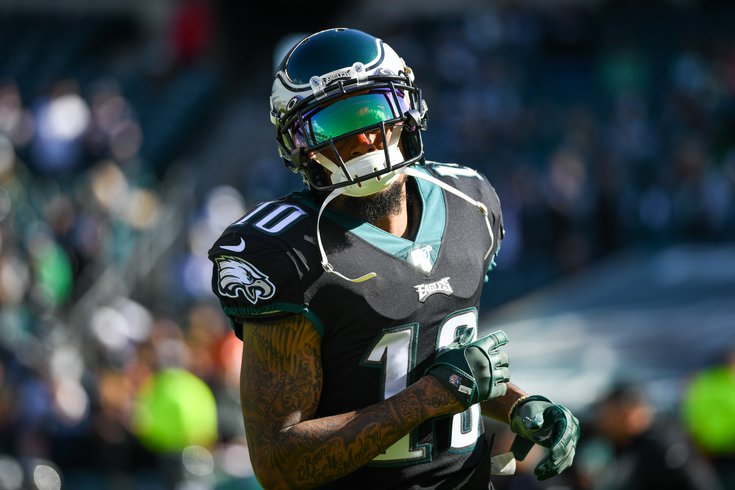 On Friday night, following a week of controversy surrounding wideout DeSean Jackson and his anti-Semitic Instagram post that included a falsely attributed Adolf Hitler quote, the Philadelphia Eagles have issued another statement in which they announced that the 33-year-old wideout was penalized for "conduct detrimental to the team."

PhillyVoice has confirmed that the penalty for Jackson is an unspecified fine.

If you think that's getting off easy, that fine could be actually quite hefty, according to NBC Sports Philadelphia's Reuben Frank.

According to terms of the new collective bargaining agreement, NFL teams can fine a player up to one week’s pay for conduct detrimental to the team. For Jackson, who has a 2020 base salary of $6.2 million, that would be $364,706.

The CBA also allows teams to suspend a player for conduct detrimental to the team up to four weeks without pay, which would be $1.459 million.  [nbcsports.com]

While it seems as though this is the end for this story, it's anything but, and although he won't face a suspension as of yet, that could change. Even the Eagles said in their latest statement that "this is only the beginning," and that there's a "concrete plan in place" for what must be done moving forward.

"[Jackson] understands that in order to remain on the team, he must also commit to supporting his words with actions," the statement reads. "We have been encouraged by his desire to educate himself, but we all understand that there is still a lot of work to be done."

According to the statement, Jackson has had "many conversations" with team leadership, presumably owner Jeffrey Lurie and Howie Roseman, both of whom are Jewish. Jackson has also in recent days spoken with other members of the Jewish community, including fellow NFL wide receiver Julian Edelman, and has received invitations to tour Jewish landmarks and museums in Philadelphia and beyond.

"We will continue to assist DeSean in this process," the statement continues, "and we also know that all of us in our organization need to listen and learn more about things that are unfamiliar or uncomfortable to us.

"We must continue to fight against anti-Semitism and all forms of discrimination, while not losing sight of the important battle against systemic racism."