Connor Barwin, Brent Celek and Darren Sproles will all be joining the staff in Philly 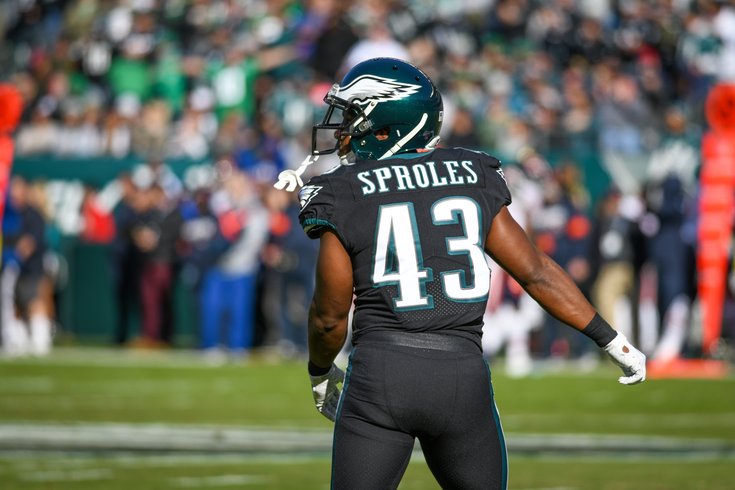 Turns out, Darren Sproles will be returning to the Eagles after all — just not as a player.

A day after the Eagles announced several changes to their coaching staff, the team announced some more changes on Friday, this time to their personnel department.

In total, the Eagles announced six new hires, including a few familiar names. Here's a look at the newly announced hires for the Birds:

While those last three names will probably get the most attention, it's actually the first two names that are the most important to the team after news came out earlier this week that the Eagles were once again shaking up their medical staff when they let go Shaun Huls, director of high performance, and Shireen Mansoori, director of rehabilitation, following a year in which new chief medical officer Arsh Dhanota, who was hired last summer, sat back and observed how that department ran before making the necessary changes.

Hunkele spent the last 14 seasons with the Vikings where he served as coordinator of rehabilitation/assistant athletic trainer and was named 2019 Tim Davey Assistant Athletic Trainer of the Year in the NFC. For the Reading, Pa. native, however, this will not be his first job in Philly. Hunkele worked with NovaCare Rehabilitation from 2000-05 and served as a physical therapist in the offseason and as an assistant to the trainers during the season. Now, he takes over an Eagles medical staff that has gone from having one of the healthier teams in the NFL just a few years ago to having one of the most-injured rosters in the league.

The other new addition to the Eagles medical staff is Ted Rath. And while the name may not look familiar, you may recognize the face. Rath is the guy whose job it was in L.A. to keep Sean McVay from running onto the field.

Ted Rath constantly has to pull Sean McVay back toward the sideline to avoid getting run over by zebras 😂 (via @NFLFilms) pic.twitter.com/ElQDZXqBFf

In addition to holding back McVay, Rath spend the last three season working in the Rams strength and conditioning departing, being first hired in 2017 as the team's head strength and conditioning coach before being promoted to director of strength training and performance in 2018. In 2017, after the Rams finished the season as the healthiest team in the NFL (based on adjusted games lost due to injury), Rath was named Strength Coach of the Year by the Professional Football Strength and Conditioning Coaches Association. Clearly, that's something the Eagles would like to see him repeat in Philly.

In total, Rath has 11 years of NFL experience after spending his first seven seasons with the Lions (2009-15) as a strength and conditioning assistant before working for a season with the Dolphins (2016). It should also be noted that Rath was charged with three counts of misdemeanor sexual battery in California last year but was later found not guilty at trial.

In addition to those two hires, the Eagles also announced a trio of former players would be joining their staff, two of whom had been previously reported.

Former linebacker Connor Barwin will serve as a special assistant to the general manager, a role that was originally announced last month after Barwin was spotted at the East-West Shrine Game. Here's how the Eagles defined his role in that original announcement:

In addition to the Shrine Game, Barwin was also in attendance at the Senior Bowl, where news of another one of these hires first leaked. That's because Brent Celek, who spent 11 seasons in Philly before retiring following the 2017 season, was also seen representing the Eagles in Mobile, Ala. He, along with Darren Sproles, who just retired from the NFL after this past season, will be joining the Eagles personnel consultants.

Finally, the Eagles also promoted Jeremiah Washburn, the son of former Eagles assistant Jim Washburn, to the role of director of player personnel/senior defensive assistant after he was first hired as an advanced projects coordinator last offseason. Before that, Washburn was an offensive line coach for the Dolphins (2016, 2018), Bears (2017) and Lions (2009-15). Prior to his coaching experience, he also has six seasons with the Ravens (2003-08) in various roles, including four years as an area scout, and was a football operations assistant in Carolina for the first year of his NFL career (2002).

It appears as though the new title makes Washburn the No. 2 guy in the Eagles scouting department behind Andy Weidl, who previous held the title of director of player personnel before being promoted to VP of player personnel following Joe Douglas' departure last offseason.