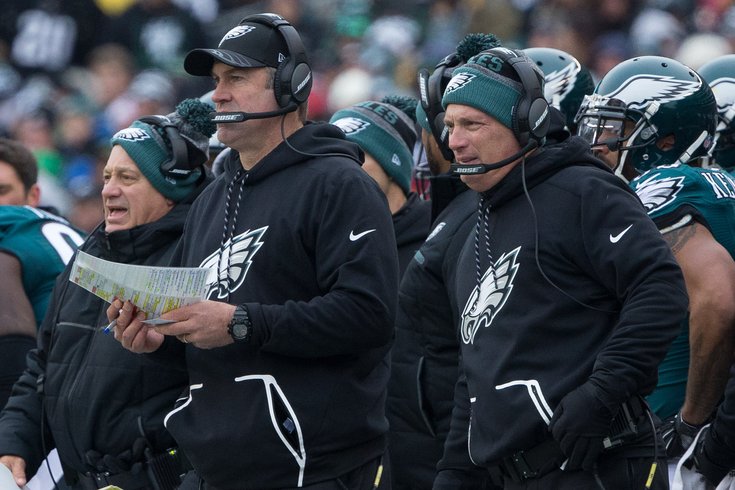 Over a couple of weeks in January, we went position-by-position, and analyzed every player on the roster, attempting to project who will be back in 2020, and who won't. In hindsight, we probably should have done the coaches and front office first, since, you know, decisions are made on those guys before they're made on the players. Oops. Next year. ¯\_(ツ)_/¯

We already know that Mike Groh is gone, and that Doug Pederson, Jim Schwartz, and Howie Roseman will all return. Perhaps your vote can just serve as something of an approval rating of sorts.

By the time their season ended in the wildcard round against the Seahawks, the Eagles were without their starting quarterback, their Week 1 starting running back, their top three receivers, their star right guard, and the backup quarterback was playing with a torn hamstring.

That was nothing new. The Eagles' offense was devastated by injuries all season long, beginning in Week 1, and Pederson was forced to attempt to win ugly. Even with the overwhelming injury obstacles, the Eagles' offense finished 12th in points, and 14th in yards. They ranked 14th in DVOA. Considering their wide receiver personnel, that's a minor miracle.

On the field, Pederson's offense, which almost completely lacked an explosive skill position element in the passing game, became a slow-plodding, time-eating, chain-to-chain-moving struggle, that was also somehow more effective than it probably should have been. It was Pederson's best chance of winning games, and he made it work as reasonable as could be expected.

Off the field, despite the injuries, and despite several distractions, Pederson kept his team playing hard, when many teams would have just rolled over after they hit rock bottom in an embarrassing loss in Miami to the woeful Dolphins that left them at 5-7 and teetering on the brink of elimination.

Yes, the 2019 season was a disappointment, but Pederson's performance in 2019 should leave fans feeling more encouraged about him as a head coach, not the opposite.

As we noted when he got a sniff as a head coach in Cleveland, Schwartz is an accomplished defensive coordinator with an outstanding history of results when he has just focused on the defense. His DVOA rankings, since 2007:

Understandably, the Eagles' defense wasn't elite when their secondary had become so depleted in 2018 that Schwartz was forced to start guys like DeVante Bausby and Chandon Sullivan, and then again in 2019 when, at times, he was once again missing a slew of starters, and conducting a defense with its share of holes, talent-wise.

To finish in the top half of the league in DVOA the last two seasons despite the Eagles' injury issues is no small feat.

Schwartz isn't perfect. I believe there are reasonable quibbles with some of his defensive philosophies. But ultimately, his results speak for themselves, and he has done a good job in Philadelphia in the four years he has been here.

#JimmyVerdict: Stay. (I mean, we already know he's staying, but that would also be my vote prior to that knowledge.)

Reemerging from "Storage Room B" in 2016 after the firing of Chip Kelly, Roseman took a franchise in free-fall, and in quick work turned it into a Super Bowl winner. In 2017 in particular, almost everything Roseman touched turned to gold. It was as impressive a batting average in one calendar as you'll see from a general manager in any sport.

Looking forward, it's worth noting that Roseman is aware of the shortcomings of the front office the last two seasons, as he addressed several key points — notably the need for youth, and as an extension of that, the team's injury history — in his opening statement at his year-end press conference.

One positive from the last couple of seasons that we should also perhaps point out is the number of core player contract extensions Roseman has gotten done, most notably for players like Carson Wentz, Lane Johnson, and Brandon Brooks. With reports that the NFL made an offer to the players that could result in an estimated $5 billion in added revenue for the players over the course of this new proposed CBA, the salary cap could skyrocket, making those extensions look like team-favorable deals.

#JimmyVerdict: Stay, but with a huge offseason upcoming.