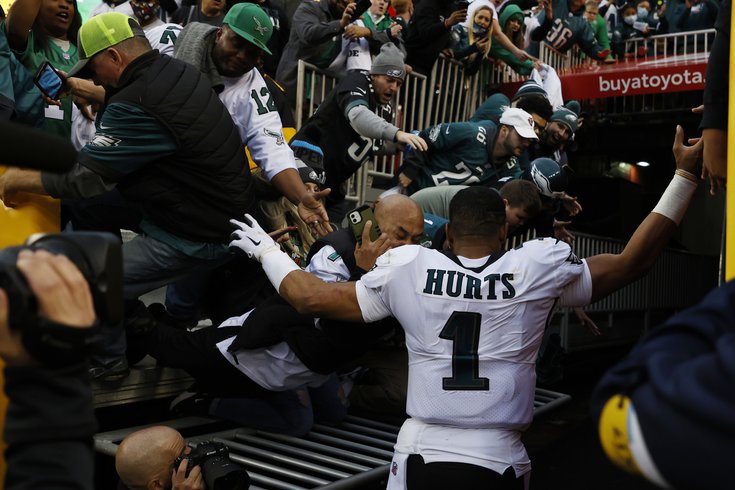 Fans fell from the stands after a railing gave way as Philadelphia Eagles quarterback Jalen Hurts left the field following the team's victory over the Washington Football Team at FedExField in Landover, Maryland.

The Philadelphia Eagles clinched an NFC wild card berth with Sunday's 20-16 win over the Washington Football Team and a little help from around the NFL. They'll be lucky to have Jalen Hurts suiting up at quarterback after a terrifying incident that happened as he left the field yesterday.

Hurts was leaving the field to head to the visiting locker room at FedExField when a guardrail near the tunnel collapsed under the weight of fans reaching out to give the quarterback a high five.

#Eagles QB Jalen Hurts was sacked only once during today’s game. Almost had a second on his way to the locker room. pic.twitter.com/WwBE5pXaxO

The most frightening angle was captured on the cellphone of one of the fans who crashed to the ground.

Here’s the moment that my friend @AndubC856 was congratulating Hurts and FedExField fell apart. Andrew is fine, said Hurts was awesome and gave him his gloves 🦅#FlyEaglesFly pic.twitter.com/hkXHSDP63P

Andrew Collins, an Eagles fan from Brooklawn, New Jersey, told 6ABC the incident got him much closer to Hurts (in multiple senses) than he had bargained for on Sunday.

"It totally caught everybody off guard. I wasn't expecting the thing to break, but it doesn't surprise me that it did," Collins said. "I was trying to give Hurts a high five. I thought I gave him a high five - next thing I know, I look up and he's on top of me, pulling me up, giving me a hug."

Hurts stuck around to make sure that there were no serious injuries and addressed the situation during his post-game press conference.

"I’m just happy everybody is safe from it," Hurts said. "It is crazy. It is crazy stuff right there. That was a really dangerous situation. I’m just so happy that everybody bounced back from it. Passionate Eagles fans. I love it."

A spokesperson for the Washington Football Team told the Washington Post that the area where the railing collapsed is the stadium's ADA-accessible section. It's supposed to be able to withstand up to six wheelchairs and companions, but was not built to sustain the weight of fans leaning against it.

“To our knowledge, everyone involved was offered onsite medical evaluation and left the stadium of their own accord. We’re very glad no one appears to have been seriously injured," the team said. "The safety of our fans and guests is of the utmost importance and we are looking into what occurred.”

FedExField, which opened in 1997, has been a mess this season and also has shown signs of disrepair during other games.

During the Football Team's home opener against the Los Angeles Chargers in September, a pipe burst in an upper section of the stadium and showered fans with what the team claimed was rainwater from a storage tank. The fans were moved to a suite for the rest of the game.

A pipe burst above the stands at FedEx Field 😮 @brgridiron

Not fun for the fans sitting below.

In another incident, the sprinkler system inside a suite went off during the team's week 12 "Monday Night Football" matchup against the Seattle Seahawks.

Even the steam system the team uses during player introductions malfunctioned and obscured their entrance due to overly humid conditions.

Turns out it was not a fluke! This is actually how the smoke machine works at FedEx Field! You can see at the end how players were holding onto each other and nearly running into dancers. pic.twitter.com/3hk4PiyYil

The Football Team, who were eliminated from playoff contention on Sunday, have had a rough go in recent years after becoming the center of an NFL investigation into pervasive misconduct at the management level.

It's reassuring that Jalen Hurts and the fans who fell were not seriously injured, but the Eagles were a few inches away from what might have been a complete disaster.

Fans reacted to Sunday's incident with a mix of relief and ridicule.

Eagles fans headed down to Washington, if Jalen had gotten hurt when the fans fell from that rickety-ass railing at FedExField. pic.twitter.com/FiLC8Gr9i5

FedEx Field railing collapse reminds me of The Vet in its latter days when a railing gave way during 1998 Army-Navy game. Thank god this wasn't that bad. But The Vet was 27 at the time. FedEx is 25. It's time.

I know lots of people just dismissed it as no big deal, but that railing situation at FedEx field could have ended very badly for all parties involved. Including Jalen Hurts, or possibly other players

I'm sure Jeffrey Lurie is on the phone.

Two questions: Is the player tunnel situated at static and fixed location? - Yes.
Is it expected that fans will try to interact with the players? - Yes

A good reminder to always use barriers fit for purpose and risk assess your venue design. https://t.co/snvqivCdfm

The railing collapse at FedEx field is such an apt metaphor.

(Glad no one seemed to be hurt)

If you don't get human waste sprayed all over you at FedEx Field, you may fall through a broken railing. Kind of like the NFL's little funhouse. https://t.co/sxzL2ryTL7

Let me tell you one thing…if the railing at any professional stadium breaks and I fall off the side, I’m not getting up. #WashingtonFootball #BrokeDown #FedExField

“Your honor, not only does Jalen Hurts, but my back and neck do too”