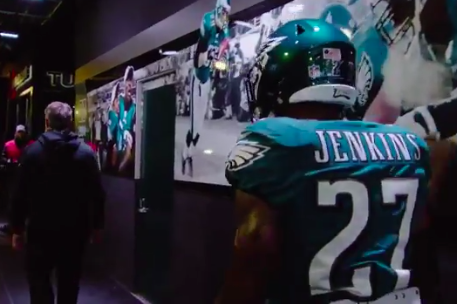 The Eagles just released its official pump-up video for the Super Bowl, and yes, it will give you chills.

That was the message sent to Philadelphia Eagles fans anxiously awaiting Super Bowl LII in a pump-up video released by the team on Thursday.

And the Eagles, who have released videos like this prior to each playoff game this season, may have outdone themselves with this clip.

"They love to say that it all comes down to one game. Really? They also said our season was over," the narator says while a clip of Carson Wentz leaves the field injured during what would be his last game of the season on Dec. 10. "They said this thing would crack. They said we shouldn't believe in ol' Saint Nick."

Sunday's showdown against the New England Patriots in Minneapolis is one game, sure. But this whole Super Bowl thing means a lot more than that in Philly, the video notes.

There are plenty of games still cemented today in Eagles lore. Like the Fog Bowl or the Snow Bowl.

"But there's something different about this bowl. Because this isn't just about moving the chains inch by inch. This is about moving an entire city to tears, block by block," the video says.

We'll say no more here, because you should just watch the video for yourself.

You can do that here: