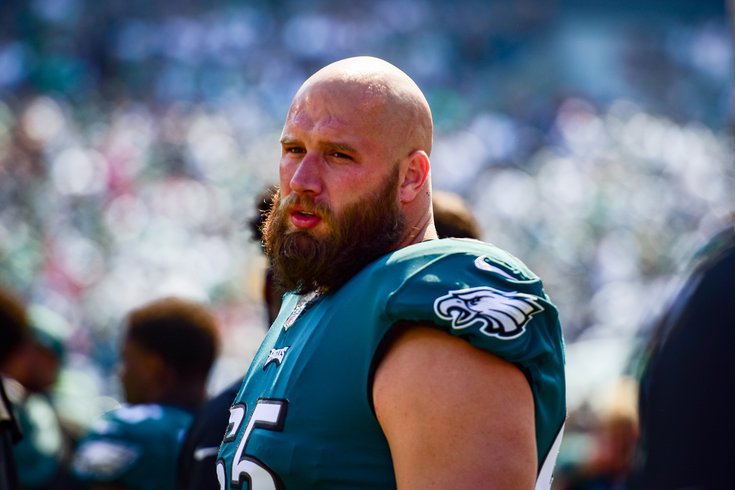 Earlier this season, Eagles right tackle Lane Johnson missed several weeks for what the team at the time only referred to as a "personal matter." But as Johnson's absence lingered on, people began to wonder what kind of personal issue would cause a player to leave so abruptly and keep him away from the team for that amount of time.

After weeks of wondering, Johnson finally returned to the team and admitted that his absence was due to an ongoing battle with depression and anxiety, one that he had been fighting privately for years. Ultimately, Johnson admitted, that anxiety and depression proved too much and forced him to return home to Oklahoma.

Prior to Sunday's game between the Eagles and Lions, Johnson sat down with FOX Sports' Jay Glazer, who revealed that he deals with similar issues, for a very personal and important interview to discuss mental health, the stigmas attached to it and why people in his business are often afraid to admit they need help.

"The first game against Atlanta, I told my mom something's really wrong with me," Johnson told Glazer. "I don't know exactly what it is. I said, 'I'm miserable. I know my mind isn't right. I know my body isn't right.' So, I left. I went back home. Didn't have any communication with the Eagles."

This, however, was not something new for Johnson, who said he was first diagnosed in college. Johnson also said he was throwing up so frequently that he began throwing up blood and that he was suffering from tremors in his hands.

"Trying to describe that to people who don't have any clue or what it's like, it's very difficult," Johnson continued. "You lose touch of your sense of self. You lose touch of what's really going on around you. And what we really tend to do is lock up, not really wanting to say anything. I felt bad for my team, but there were signs. This wasn't something new that was spur of the moment. This was going on for months."

"Because I felt like I had my stuff temporarily under control. I was ashamed, to be honest," Johnson said when asked why he never said anything in the past. "In this league, in the NFL, where it's a gladiator-type sport, it's something that's not often talked about but it's often felt throughout the league. We need to talk about it. But yeah, man, I was living in hell for a long time. I thought achievements, what I've done on the field was going to make me feel better, but it only amplified the situation. I'm glad I'm here talking about it, being open about it."

This isn't the first time the Eagles have found themselves at the intersection of mental health and sports. A few years ago, Johnson's linemate Brandon Brooks missed time while dealing with his own battle with anxiety.

Having guys like Johnson, Brooks and others come out and openly discuss their mental health struggles — especially given what they do for a living and how they can at times appear invincible to the average fan — is so important it's hard to put into words.

To the average person who doesn't deal with these things, it may not seem that way, to but anyone sitting at home and watching who is going through something similar, there's no way to quantify how meaningful it is to hear someone openly discuss their own struggles. Not only does it make you feel less alone, but it makes you feel like you're not "less than." After all, if it can happen to someone as big and strong and powerful and successful as an NFL athlete, maybe I'm not so broken after all.

It also may be the kick someone needs to go seek professional help, because there's nothing worse than getting to the point where Johnson did, or Brooks before him, and allowing that anxiety to swallow you up. Trust me, I know.

So to Johnson, Glazer and all the others who have spoken out about their mental health issues in an effort to bring awareness to something that so many people suffer from without ever seeking help: Thank you.