Eagles mailbag: Where does Nick Sirianni rank among the 2021 head coaching hires? 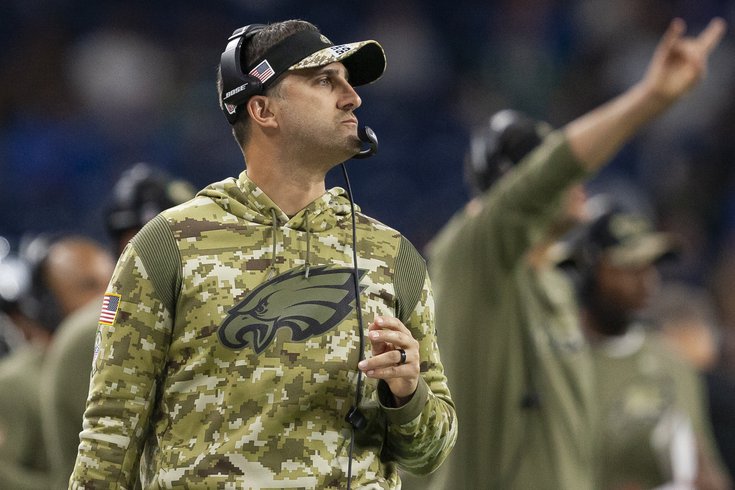 That's right, blurry guy in the background. He's No. 2.

Question from Owen: Where would you rank Nick Sirianni among first year head coaches? I have him as a close second behind Staley. Also is this the worst batch of new head coaches in recent times?

OK, so there were seven this year. In alphabetical order:

So let's go in reverse order here from worst to best.

• Urban Meyer is a clown, and there have been reports that his players don't respect him. He's last.

• David Culley was hired into an impossible situation, and the Texans were always going to have trouble finding a good candidate.

• I saw all I needed to see out of Dan Campbell when the Eagles played the Lions this year. At the end of the first half, for some insane reason, instead of kicking a field goal Campbell decided to go for it on 4th and 1 from the Eagles' 22 yard line with 13 seconds to play. If the Lions had converted that, then what? They'd kick a slightly closer field goal? Instead, they went for it, didn't get it, and got zero points. Is it unfair to base my entire opinion of his coaching prowess off of that one sequence? Maybe, but that's what I'm doing. OK, also, it's doesn't help that they're 0-8-1.

• The Jets have the worst point differential in the NFL, so it's hard to put Robert Saleh any higher than this.

• Like the Lions above, I got a good look at the Falcons when the Eagles played them earlier this season, and that team was completely unprepared Week 1, despite employing a 14-year veteran at quarterback. That was on Arthur Smith and his staff.

Sirianni has had his issues in his first season, but he is pretty emphatically better than all five of those guys in what is looking like a pretty terrible hiring cycle, as you said. The only head coach who can be considered better is Brandon Staley, who in my opinion, is already wildly overrated simply because he can string a few coherent sentences together in press conference settings.

Question from LostInChiTown: Can Hurts become a budget Lamar Jackson? Is that good enough in today's NFL? Obviously he's not there yet, and it's an atypical way to win, but his final stat line is on pace to be close to "2020 Lamar."

Since it's so hard to find a franchise QB in the Aaron Rodgers, Justin Herbert, Josh Allen mold, would the team be better served leaning into a Baltimore identity and shoring up the D and OL?

The Eagles should definitely lean into "the Baltimore model," so to speak, the rest of this season. Long-term, I do have concerns:

The concern for me isn't that Jackson shrinks in big moments. It's that his style of play is easier for good defenses to defend in the playoffs than it was for the weaker opponents on their regular season schedule. While that can also be said for high-octane passing attacks to some degree, if the run game isn't working, it's tougher to adjust and go to something else. But the bottom line is that Baltimore scored 17, 12, and 3 points in playoff losses the last three seasons.

• Since Jackson's MVP season in 2019, his numbers got worse in 2020, and then worse again so far in 2021. Obviously, it's hard to keep up that level of elite play when you're the freaking MVP, but the dropoffs feel rather substantial. I do think teams have begun to figure out how to at least slow him down. That's a thinking that gets mocked whenever Jackson makes an amazing play, which is stupid, because the argument isn't that Jackson suddenly forgot how to be explosive. It's that when you look at his numbers, it's kind of hard to deny the downward trend.

• Jackson has stayed healthy, but if we're looking at his style of play, with the significantly higher number of hits that he takes, logically his risk of injury is going to be higher than most quarterbacks.

Ultimately, while I think that Jeffrey Lurie's reported meddling can be a detriment at times, I do understand why he would want his team to win through the air, long-term.

Question from Hola: Does Dallas Goedert have a concerning concussion history? I feel like this was a concern earlier in his career but cannot remember. He's about to get paid, so I wonder if that will be a factor.

I was curious about that as well, because I immediately recalled the video of him getting sucker punched in a South Dakota bar. But, no, he's fine. His injury history, via draftsharks.com:

• September, 2019: Goedert was forced to leave warmups before the game against the Falcons with a calf injury. He was available for the next game.

• August, 2020: Goedert suffered a hairline fracture on his thumb during training camp practice.

• December, 2020: Goedert suffered a calf injury against the Dallas Cowboys in Week 16. He missed the season finale game.

Zach Ertz had previously suffered a couple of concussions, which is perhaps where you (and I) were confused.

Question from Kephas: Are the Eagles going to re-sign Goedert?

The Eagles got team-friendly deals done in-season with Jordan Mailata and Josh Sweat. They no doubt tried to do the same with Goedert when they had extension talks earlier this offseason.

Tight ends have typically not earned a ton of money in free agency, but their value bumped up a bit during 2021 free agency, when Jonnu Smith (4 years, $50 million) and Hunter Henry (3 years, $37.5 million) both got good deals.

In my opinion, Goedert is better than Smith and Henry, and the Eagles would probably be happy to do a similar with with Goedert as those two guys, as in, something in the range of $12.5 million/year. If they can't get something worked out, the Eagles always have the franchise tag at their disposal, which OverTheCap projects to be $10,834,000 for tight ends next season, a bargain price relative to franchise tag amounts at other positions.

Goedert is a good, young player entering his prime. The Eagles don't have a lot of those types of guys, so yes, they're extremely likely to retain him one way or the other.

UPDATE: The Eagles just signed Goedert to a monster contract extension making him one of the highest paid tight ends in the NFL.

Another question from Kephas: Let's say the Eagles make all three of their first-round picks. In a salary-capped league, is it possible that comes back to hurt them from a salary cap/contract standpoint? Or nah?

Rookie deals aren't like the old days, when guys like Sam Bradford got taken first overall, and immediately became one of the richest players in the NFL. They're much cheaper now. DeVonta Smith, for example, will have the following cap numbers over his four years with the Eagles:

If the Eagles take three good, productive players in the first round of the 2022 draft, and they're all looking for big second contracts in, sayyy, 2024 or 2025, the Eagles would surely sign up for that scenario right now.

Question from Rawg: Jimmy Bama! Why do punters play their punts in such a way as to pin the opponent back as far as possible, but kickers don't? It must be something simple, like a rule I don't know or just the nature of kicking vs. punting, but it just never made sense why a kicker wouldn't attempt the same. They always just boot it into the end zone. Love always, Rawg

On punts, as you know, the punter stands way in the backfield, usually 14-15 yards deep. At the snap, the gunners on the outside are immediately sprinting down to cover the punt, and will be around 10 yards down the field by the time the ball is booted away. In other words, they're like 25 yards away from the punter himself by the time the ball is in the air. If the punt has good hangtime, as you've seen hundreds or thousands of times watching football, a gunner is already standing there right by the returner, waiting to tackle him the second he catches the punt, unless he calls a fair catch.

That's basically impossible on kickoffs, because (a) the entire coverage team, including the kicker, is lined up at the 35 yard line for the kickoff, so there's no head start like there is for gunners on punts, and (b) it's much harder to generate hang time on kickoffs than it is on punts, to allow the coverage guys more time to get down the field.

As such, there is always going to be a lot of room for a return on a kickoff that is booted deep. That is not the case with punts.

Now, there are some teams that will purposely try to loft the ball high on kickoffs and try to land them inside the 5 yard line, trying to force a return instead of just giving the return team a free pass to the 25 yard line on the touchback. The Patriots, for example, were doing that on Thursday night against the Falcons, who were missing star returner Cordarrelle Patterson.

Instead of running up and blasting the ball through the end zone, their kickoff guy was standing like three yards from the ball, taking just one step, and kicking it away, seemingly trying to limit his own ability to put it deep into the end zone.

The Eagles used to do that under Dave Fipp at times, when they didn't respect the opposing team's chances of making them pay by forcing the returner to bring it out. More often than not, the returner wouldn't make it back to the 25, and oftentimes, a penalty would occur that would push them even further back.

You're not going to do that against guys like Patterson or Jamal Agnew, to name a few, but I'm with you that more teams — the Eagles included — should be forcing more returns on kickoffs.

Question from Dougie: Are you happy now that the Eagles won't fly the rest of the season?

Well, we'll see. Maybe I'll have to fly to Los Angeles, Tampa, Dallas, Green Bay (please God no), or Phoenix in January if the Eagles make the playoffs.

But otherwise, yes! Road trips sound fun in theory, and they definitely can be at times, getting to see bits and pieces of the country and whatnot, but they mostly just make the subsequent work week way more difficult because you lose the bulk of an entire day while traveling. The guys/gals who can work while on the plane are less affected by that. I can't.