Eagles mailbag: Who is this year's Boston Scott? 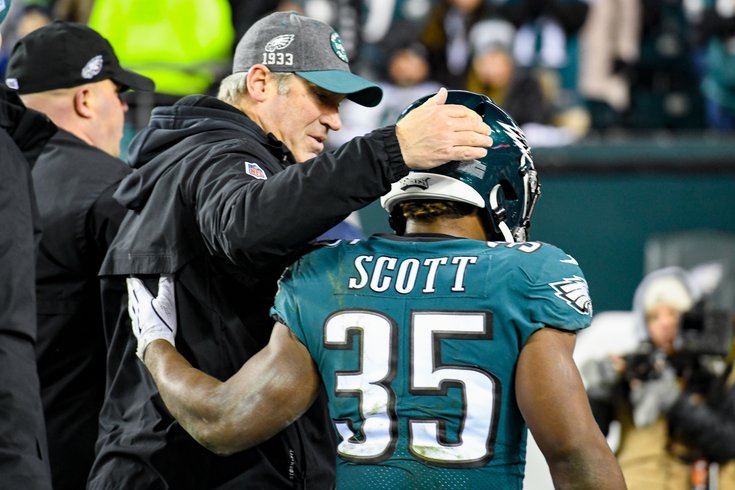 In our Hurricane Isaias Eagles chat on Tuesday, there were a lot of questions that we could not get to in time or other questions we did answer but could use more color. And so, let's do a mailbag post to answer some of the overflow, as well as some commonly asked questions on Twitter and via email.

Question from Ryan: Who is the guy this year who has been around a while but is out of sight / out of mind who people aren't projecting to make the roster, but who will actually play this season and maybe even have an impact, like Boston Scott a year ago?

Ooh, I like that. You could also call it the Greg a-Ward. Boom.

I'll go with DE Joe Ostman. I haven't read any other 53-man projections, but I feel like most writers would have him off of theirs? Do I have that right?

Anyway, he was very clearly going to make the roster last year if he hadn't torn his ACL, and I think the team still likes him. Couple that with the notion that the DE4 spot is essentially empty and there for the taking, and I can see Ostman not only making the team, but also earning snaps as part of that D-line rotation.

Question from Eagledelphia: Were there any non-Eagles opt-outs that will affect the Eagles in any way?

BLG took a look at the Eagles' schedule and noted all the players on the Eagles' opponents' rosters who opted out. There aren't a lot of household names there.

I would say that the team on the Eagles' schedule most notably affected by opt outs is the Giants. Starting LT Nate Solder opted out, so the Eagles won't be able to take advantage of him in 2020. The Giants also lost Sam Beal, a guy they used a third round pick on in the 2018 Supplemental Draft. Beal suffered a shoulder injury that ended his rookie season in 2018, and then he landed on IR in just before the start of the 2019 season with a hamstring injury. They re-activated him in November, and he played in six games, starting three. And now his 2020 is over, obviously, after he opted out.

They're already without second-year CB (and 2019 first-round pick) DeAndre Baker, who is on the commissioner's exempt list, so it's looking like they'll be thin at corner again this season.

Question from DaveG: Jimmy, Now that the NFL is allowing teams to protect four players on the practice squad, do you think they'll be able to keep all 10 of their rookie draft picks?

The four protected players rule really only applies to prevent other teams from poaching guys off of practice squads and adding them to their active rosters, during the season. Take last year, for example. The Dolphins tried to poach Sua Opeta off of the Eagles' practice squad, but the Eagles avoided that by adding him to their own 53-man roster instead, even though he was extremely unlikely to play in a game. Under the new rule, each Tuesday, each team can designate four players they wish to protect. If that rule applied last year and they had protected Opeta, the Dolphins wouldn't have been able to try to poach him, and the Eagles wouldn't have had to "call him up" to their 53-man roster.

Of course, had that rule existed in 2017, maybe the Eagles wouldn't have been able to poach Jake Elliott away from the Bengals.

Question from Mike: I saw some summer pictures of Sidney Jones on the Eagles website, and color me unimpressed. I was hoping he would look a little more solidly built as we go into camp, because I think he's underachieved until this point, but he sadly looks to be in about the same condition as last year. I was really hoping the light switch would click on for him because I still think he has NFL talent;  I just don't think he has NFL drive. Your thoughts?

I have not seen him yet, so I can't comment on his physique, though I think it would have been surprising if he showed up to camp all jacked up. His game, or at least his game in college, was all about quick feet and ball skills. Some added bulk in the weight room might make him more durable, but I don't think a muscled-up version of him will necessarily make him a better player.

I do agree that there should be concerns about his "NFL drive," as you put it. The game last season that really got him in Jim Schwartz's dog house was in Minnesota, which we covered earlier this offseason. The entire Eagles secondary crapped the bed in that game, but Jones and Rasul Douglas were especially bad. Jones' day:

Schwartz at times can live with poor play on the field, as we have seen, but he has shown that if he does not trust your mentality, you won't play. The week after the Vikings game, the starters in Dallas were Mills (returned from PUP), Douglas (who was destroyed worse than Jones in Minny), and Orlando Scandrick (signed off the street a few weeks prior).

This is a make-or-break year for Jones in Philly. He's almost certainly not going to start over Avonte Maddox, but he can still contribute. We'll see.

Question from Sebastian: What did you think of the ESPN piece handicapping players' odds of making the Hall of Fame?

Ha, yeah, I did see that. They had Jason Witten as a 100 percent lock for the Hall of Fame, and Jason Peters as merely likely. Sadly, that's probably accurate, in the sense that voters are morons, and Witten has had a more visible career than Peters. But obviously, as far as which of those two players you would take for the entirety of their careers, anyone who wouldn't take JP over Witten in half a heartbeat just doesn't understand the game.