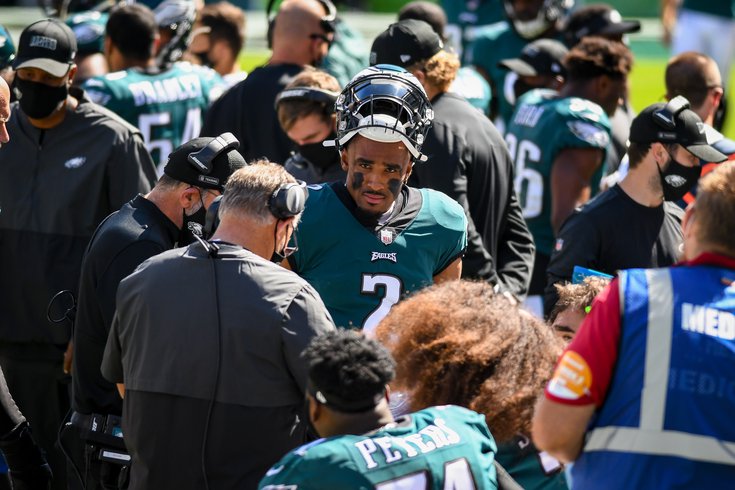 On the Philadelphia Eagles' first six drives on Sunday against the Baltimore Ravens, the offense looked completely useless, as they had -12 yards, 0 first downs, 5 punts, and a lost fumble.

Looking for a spark to get the offense going, Doug Pederson turned to second round quarterback Jalen Hurts.

"He's part of the game plan every week," Pederson said of Hurts after the game on Sunday. "Just felt it was the right time to get him in the game. At the time we had been struggling a little bit offensively, especially running the football and gave us an opportunity to do that with him. It kind of calmed the (Ravens') defense down a little bit, too. There wasn't as much pressure when he was in the game at quarterback. Just had to find a spark and got him in the football game."

On drive No. 7, Hurts did indeed provide some much needed juice to an injury-ravaged offense that can use playmakers in any form. Below is a cutup of some of Hurts' plays from Sunday, and the impact that he had, via Twitter thread:

The Eagles should use more Jalen Hurts in their offense, with gifs and stuff, article and thread 🏃‍♂️💨https://t.co/T6N0dCSRt3

After the long Miles Sanders touchdown shown in the above Twitter thread, that was basically the end of Hurts for the day, as Carson Wentz found his sea legs and nearly engineered a heroic comeback win.

But clearly, an expansion of Hurts' usage is worth exploring as they prepare for the Giants on Thursday night, a game in which they're 6.5-point favorites according to TheLines.com's consensus odds. On Monday, Pederson acknowledged that Hurts should get more playing time.

"Obviously you saw yesterday some of what we call X plays or plays that are sort of unscouted with him, have been productive for us in the last three or four weeks," Pederson said. "I think it's something that we've got to continue to explore. It does give us the ability to run the football with him, so he's like another -- I don't want to say he's another running back, but he's a quarterback that can run the zone read plays from the quarterback position.

"It's something that we're definitely going to continue to explore each week, if it's conducive; it has been successful for us, and I could see things continuing each week that way."

Hurts shouldn't be viewed as a threat to Wentz as a quarterback. The Eagles' offense is missing four starting offensive linemen (plus some backups), and as Pederson noted, if Hurts' presence can slow down the opposing pass rush, then great. But additionally, they are also without their top three wide receivers, and they may also soon be without their top two tight ends. The Eagles should be using all hands on deck, and Hurts is a player capable of making plays.