Doug Pederson expects Alshon Jeffery to be back, says he's 'a big part' of Eagles' offense 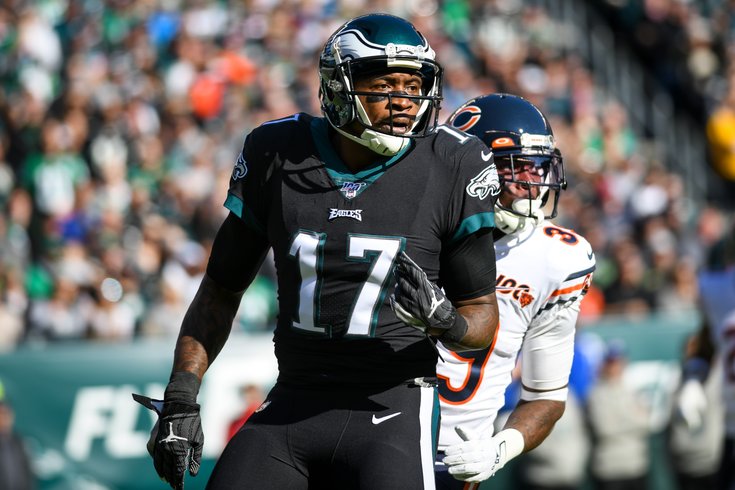 There have been mixed signals sent all offseason.

Will Alshon Jeffery play again for the Eagles? Will he be let go? Traded?

The one-time Philly WR1 has had a plague of injury and off-the-field issues make it seem like he's done contributing to the Eagles on the field, as he continues to recover from Linfranc surgery on his foot, a procedure that requires around nine months recovery time.

Headlines were made as Jeffery, 30, was reportedly a source of leaks for criticism of players in the Eagles locker room.

The problem is, he's very expensive and would cost the (soon-to-be) cash-strapped Birds $26 million in dead money to part ways with via trade or release. Most pundits expected the Eagles to cut ties with Jeffery this offseason but he remains on the roster and with a slew of rookie wideouts headed into the receivers room, his days here looked even more numbered.

But, perhaps with the lack of practice time due to COVID-19, his veteran presence may be worth his potential roster spot.

"All our veteran players, to be part of this virtual offseason like they have, I have been impressed and Alshon is of those guys," head coach Doug Pederson told reporters on a Zoom call Tuesday. "The dialogue he's had in the receivers room, the way he converses with some of the younger players..."

"There's no timetable right now, we want him to focus on his rehab."

Jeffery's production has declined as he's looked less and less like his once dynamic, gigantic-catch-radius self.

There is a need for Jeffery's big body, and his ability to go up and win jump balls. With DeSean Jackson the lone veteran assured a starting role, the Birds drafted three smaller speed receivers (Jalen Reagor, Quez Watkins and John Hightower) while also trading for Marquise Goodwin. If last year's slow developing draftee J.J. Arcega-Whiteside doesn't make big improvements in training camp, the Eagles may have no choice but to give Jeffery a chance when he's healthy again.

"He's a big part of our offense and we do plan to have him in the offense at some point," Pederson said. "If there's a couple games he's not ready, we're not going to put him out there, we are going to wait for him to get ready. ... He is a great leader and he's going to help the young players come along."

Here's a look at the wide receiver depth chart according to our Eagles writer Jimmy Kempski:

Jeffery, at full strength, is easily a starter. He just has not been expected to be in Philly once he's healthy again.

If the locker room issues have "blown over," a healthy Jeffery would be a welcome part of the now much faster offense. He could have more room to operate over the middle or on the outside with several guys able to take the top off.

Interestingly, sports books agree, handicapping Jeffery with a 66-1 chance of winning NFL comeback player of the year, tied for the 13th best odds of any player (according to betonline.ag).

It is likely Jeffery starts the season on the PUP list, allowing the team to put him on the IR when the season begins if needed without losing a roster spot. Should he progress and, well, get along with everyone, he may be a key mid-season "acquisition."