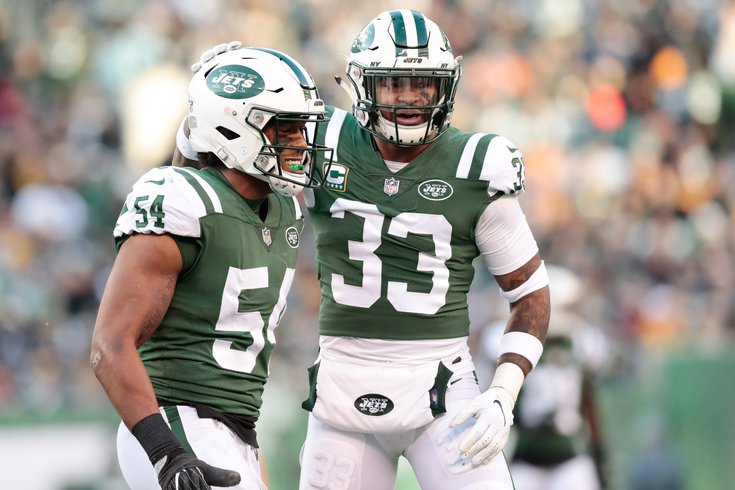 No, not Jamal Adams. But Jets linebacker Avery Williamson (left) might make sense for the Eagles.

Welcome to a weekend edition of What They're Saying about the Eagles. It's such a beautiful day in the Delaware Valley, I hope you're reading this from your patio or deck — while remaining socially distant, of course — and not sitting inside your apartment like someone I know.

And because you should be outside and not sitting inside on your computer,  I'm not going to waste your time or mine with a long intro. I'll just quickly point out that the Eagles made a huge signing on Friday night that has flown somewhat under the radar, adding one of the best athletes in the world.

BREAKING per Outside The Lane: if no @MLB season, @Eagles sign FB/OLB @bryceharper3 to 1-year deal. 💪

Looks like Duke Riley just lost his starting job. Sorry about that.

However, I'm not sure that's the best position for Harper — I could see him more as a receiver or safety, depending on how good his hands are without the assistance of a mitt — but it's still huge news for the Eagles. I'm not sure when the team plans to hold the press conference, but we'll keep you posted. Who knows, this could lead to other MLB players signing in the NFL, and we already know Mike Trout looks good in midnight green. At 6-foot-1, 235 pounds, there's your new linebacker.

Somehow, this leads perfectly into the first item in today's What They're Saying...

A hypothetical trade for a LB

Over at CBS Sports, Cody Benjamin took a look at five potential trade proposals that he thinks make sense for both sides. Interestingly enough, one of those trades involved the Eagles landing a linebacker, an area they're still in need of upgrading (more on that in a minute). It also involves the Eagles shipping out a player who has long been rumored to be on the trade block, especially since the team added Darius Slay and Nickell Robey-Coleman this offseason.

Of course, this trade would cost the Eagles more than just Rasul Douglas — it would also eat into their remaining salary cap, which could be used elsewhere OR could roll over to next season when they're really going to need it.

Howie Roseman already said no to a big-money veteran at linebacker by cutting Nigel Bradham, and between T.J. Edwards and third-round pick Davion Taylor, the Eagles have internal candidates for the MLB job. Roseman is definitely not averse to player-for-player swings late in the offseason, however, and old friend Joe Douglas would likely welcome the chance to offload Williamson's $8.5 million cap hit. By giving the Jets much-needed cornerback depth in Douglas, who reportedly already took a pay cut because he's on the roster bubble, Roseman nets a former 100-tackle machine with the option to simply let him walk after 2020. In an abbreviated offseason, Williamson's experience would arguably make even more sense, even if his salary is bloated.  [cbssports.com]

In our last What They're Saying, we took a look at McManus' offseason assessment of the Eagles offseason and whether they were better or worse at each different position group. Today, we'll take a look at his take on the defense, where he saw two areas of improvement but also two areas where the team has taken an obvious step back, at least on paper.

One of the areas where he thinks they're worse than 2019 is at linebacker.

Better, worse or the same? Worse

The Eagles don't prioritize linebacker highly and it shows, with 2% of their 2020 cap spending ($4.5 million) currently committed to the position, per Spotrac data. Bradham had an injury-plagued 2019 season but was a key figure in Schwartz's defense prior to that. The Eagles are bullish on Edwards, who played 11% of the snaps and started four games as a rookie, finishing with 30 tackles.

Taylor has some impressive athletic measurables but is raw and will need time to develop.  [espn.com]

Over at NFL.com, Gil Brandt took a look at the nine biggest roster holes across the NFL, and the Eagles came in at No. 6. But not for their need at linebacker or at defensive end (we'll get to that next). It's for their other biggest need, one that we've written about at length here at PhillyVoice.

The general consensus at this point seems to be that Miles Sanders will emerge as the lead back for the Eagles, who have gone with more of a running back by committee (RBBC) in recent years. But that doesn't mean the Eagles aren't still looking to add depth at the position, one that currently lacks a battle-tested veteran.

LeSean McCoy and Devonta Freeman remain the two most popular names out there, and NJ.com's Mike Kaye threw out Theo Riddick as an option earlier this week, but Brandt offers up a different option, and one who is still rehabbing from major surgery.

I'm bullish on Miles Sanders' chances to become the first bell-cow back of the Doug Pederson era, but if something were to happen to him, the Eagles could be in trouble. The cupboard currently looks awfully bare when it comes to potential replacements, with Boston Scott, Corey Clement and Elijah Holyfield positioned as the top three backups. Carlos Hyde could have been an option, but he signed with Seattle. Devonta Freeman remains a possibility, but the former Atlanta starter might have salary demands that are too rich for the Eagles' blood. LeSean McCoy says he would love to return to his former team, but the fact that he was a healthy scratch for Kansas City in last year's playoffs raises questions about how much he has left in the tank. It might make sense to kick the tires on Lamar Miller, who is progressing in his rehab from reconstructive knee surgery.  [nfl.com]

A secret weapon at DE?

The other area of need for the Eagles has been defensive end, where there remains a few quality free agents who can make an impact. But the Eagles might not to add anyone. While they may not be the greatest options for the team's third DE (a spot that sees a lot of action in Jim Schwartz' system), the team could give Josh Sweat, Genard Avery or Shareef Miller a look this season.

Or, as Reuben Frank suggests, they could go a different route entirely...

How about none of the above?

Because the Eagles already have a guy on the roster with 32 ½ career sacks, with plenty of NFL experience at defensive end and with a 3-year, $30 million contract that means he needs to be on the field.

Here's why it makes sense.

The Eagles may be thin at defensive end, but they have a glut at defensive tackle, with Fletcher Cox, Javon Hargrave, Jackson and Hassan Ridgeway.

From the outside, it looks like too many bodies inside and not enough bodies outside.

All of which points to Jackson getting significant snaps outside.  [nbcsports.com]

And finally, we come to those head coach/QB rankings we promised you in the headline.

Over at Bleeding Green, John Stolnis ranked all the pairings in the NFL, and the Eagles tandem did pretty well for itself, coming in at fifth overall behind Pete Carroll/Russell Wilson and ahead of Bruce Arians/Tom Brady.

4. Pete Carroll/Russell Wilson
I initially had this duo a bit lower because Carroll is more of a defensive-minded coach, and Seattle’s offense has always been run-heavy at the expense of Wilson’s incredible talent. However, there’s no denying the success these two have had together, winning a Super Bowl and almost winning another, and Wilson is a perennial MVP candidate, so it’s hard to have them any lower than this.

5. Doug Pederson/Carson Wentz
This is more a reflection of Pederson than Wentz, although Wentz has certainly proven he can play at an elite level when healthy. His final month last year, with no wide receivers to throw to, was stunning, and Pederson’s ability to massage his gameplans to meet whatever deficiencies the team has had at the skill positions has been remarkable. Hopefully some additional speed at wide receiver will allow these two to take things to the next level.

6. Bruce Arians/Tom Brady
Arians extracted remarkable production from Carson Palmer and Drew Stanton as head coach of the Arizona Cardinals and prior to that, as Indianapolis Colts’ offensive coordinator under Chuck Pagano, helped Andrew Luck to his best seasons as a pro. Now, he has Tom Brady in Tampa. If Tom has anything left in the tank, Arians will find it and get the Bucs back to the postseason.  [bleedinggreennation.com]

Who were the top three? Where did the rest of the NFC East fall? You'll have to click over to find out...