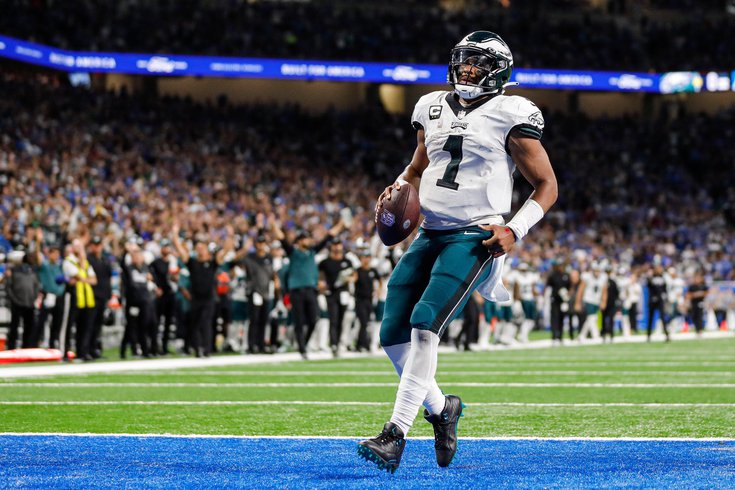 Jalen Hurts and the Eagles will stay put at 4, for now.

Jalen Hurts had one of the best passing performances in his short pro career in the Eagles' Week 1 win in Detroit, if not the best. His shortcomings as an NFL thrower are well documented, but he's on the upswing. It's abundantly clear, however, how much of a difference he can make in a game with his legs. That was on display last Sunday, as Hurts ran for 90 yards and a touchdown in the 38-35 victory. Hurts has been putting up numbers like that since he became a starter in 2020. That versatility gives the Eagles' offense an extra dimension on third and fourth down.

Hurts going full school yard football in high-leverage situations, using his ability as a scrambler gives the Eagles a nearly unmatched threat at QB given Hurts' combination of strength and speed. If the Eagles draw up a pass on third or fourth down and Hurts' first or second read isn't there, opposing defenses could quickly be on skates when Hurts escapes the pocket and tucks the ball.

Here were the leaders in rushing first downs across the league in Week 1:

These were the leaders for the entire 2021 season:

When speaking with the media on Saturday, Nick Sirianni said the following about the team's willingness to go for it on fourth down this year:

I thought we were pretty aggressive last season, too. I do a lot of studying with that. I think if you go in there and try to make the decisions based off what the chart says, you know, as far as in-game, then I think that you're making a mistake.

Same thing if you try to — on third down you're like, okay, I haven't ordered these third downs yet and I'm going to call this one. You have to think about these things beforehand.

So I think to answer your question, what I mean by that is where I'm more comfortable is I've had more reps with it. And not just our game reps, but the ones I spend on Fridays in the meeting room of, okay, it's fourth down and four in this scenario, what are we doing? Boom. What are we calling? Boom. Okay.

Working in fourth-and-short territory, the Eagles have a bevy of options. They have an elite run-blocking offensive line. They can hand off to a back like Miles Sanders or Boston Scott. They could just sneak the ball with Hurts, who excels in short yardage because of his strong lower body. Then there's the threat of a play action where Hurts could make a quick toss to Dallas Goedert in the flat or, of course, tuck the ball and get the first with the legs as he does time and time again.

Continuing his discussion about going for it on fourth, Sirianni had this to say regarding how third down play-calling changes when a team is so aggressive on fourth down:

That's a huge advantage that an offense has, is we know the mode we're in, they don't know what mode we're in, and we can play -- and a lot of different things can be alive.

So that's what you're trying to do always as an offensive coach. Trying to make yourself multiple so they have to defend a bunch of different things.

Though Hurts will obviously need to develop more as a passer if the Eagles want to be consistent Super Bowl contenders, the offense is currently built to have succeed on third or fourth and short. The offense runs the ball quite well. Everyone knows that. They topped the NFL in rushing yards in 2021 and set a franchise record there. If it's, say, third and four, the Eagles don't need to force a throw. They can attempt a run with any of their backs behind this powerful o-line. The Birds did average 4.9 yards per carry last year. Fourth and short with Hurts under center is where the QB's unique skill set is maximized and his deficiencies are maximized.

Versatility will come with Hurts as a passer as he learns to get all of Goedert, A.J. Brown and DeVonta Smith involved. That ability to be "multiple," as the coaching staff likes to say, is already present for Hurts though with his skill as a runner when facing third and fourth downs.

Just saying: Don't be surprised if a third and six for the Birds on Monday Night Football turns into a 23-yard run for QB1.