What they're saying about the Eagles: The best show going 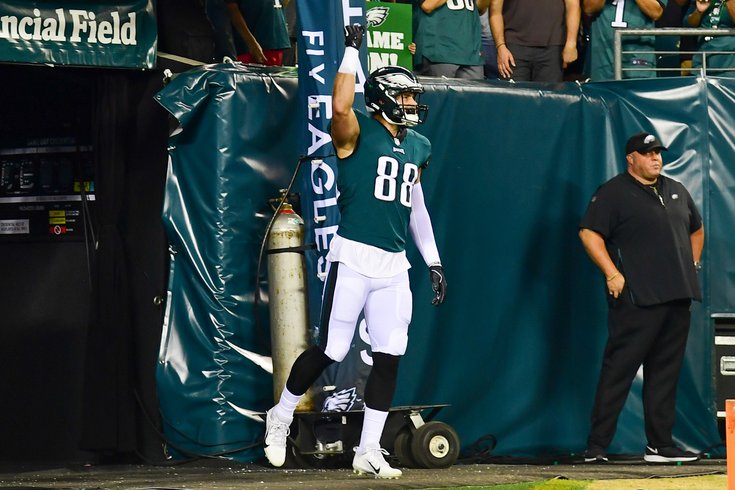 Is Dallas Goedert in the conversation for one of the league's best tight ends?

At 8-0, and with no signs of slowing down, it's probably safe to say that the Eagles are good.

Their next two opponents – Washington on Monday then Indianapolis next Sunday – are considered not good.

The Eagles got the mini-bye with the Thursday night start down in Houston last week, so things have seemed a bit slower than usual (paired with the city's attention focused elsewhere), but this is the NFL. There's never a shortage of things to talk about.

So here's what they're saying about the Eagles...

By record, and now advanced metrics, the Eagles are the NFL's best.

After the Week 9 win against the Texans, the Eagles charted out at the top of Football Outsiders' DVOA leaderboard at 32.4 percent, with Buffalo trailing them at 30.6 percent.

There's an in-depth explanation of what DVOA is that you can read up on HERE, but the gist of it is that it's sort of like a football equivalent of Wins Above Replacement, just on a per-play basis.

Either way, when a team ranks No. 1 in something, it's a good sign...most of the time.

Wrote Aaron Schatz of the Birds:

The undefeated Philadelphia Eagles finally fly to the top of the DVOA mountain this week, passing the Buffalo Bills to reign as our new No. 1 team. Both Philadelphia and Buffalo dropped in DVOA -- the Eagles after a moderate win against a bad Texans team, and the Bills after a close loss to a good Jets team -- but the Bills dropped more than the Eagles so they relinquish the top spot which they had held since Week 1.

The Eagles are at 32.4%, which isn't particularly high for the No. 1 team at midseason, but they are not "frauds" boosted by an easy schedule. They are No. 1 despite the adjustments for that No. 29 schedule. Without the opponent adjustments, the Eagles would be over 40%. The Eagles come in about middle of the pack in the history of 8-0 teams, ranking 14th out of 24 teams that started 8-0 since 1981. [Football Outsiders]

Coach of the year?

At the halfway point of the season, Bill Barnwell over at ESPN weighed in on where things stand for him as far as end-of-year awards go.

When it comes to Coach of the Year, the Jets' Robert Saleh and the Dolphins' Mike McDaniel are both in the running for the turnarounds they've so far orchestrated with their respective teams, but with the way things are going in Year 2 in Philadelphia, Nick Siriani should be in the lead.

I'm simple. Until the Eagles lose a game, I don't think it's possible for anyone to knock Sirianni out of the top spot. The former Colts assistant was a viable candidate last season, when he helped lead an Eagles team that had gone 4-11-1 in 2020 to a 9-8 record and a playoff berth. After an active offseason, many likely expected them to take another step forward in 2022.

An 8-0 start wasn't anticipated, though. Quarterback Jalen Hurts continues to flourish under Sirianni's tutelage, and in a season with so many one-score games, it's a testament to Philadelphia's dominance that it hasn't been involved in many close contests. The Eagles have had only two games decided by seven points or fewer; one was a game against the Lions that required two fourth-quarter touchdowns to get close, the other was a 20-17 victory over the Cardinals.

Some factors out of Sirianni's control have helped. The Eagles have been one of the league's healthiest teams. They've played the easiest schedule in the league, per ESPN's Football Power Index (FPI) and project to face the easiest schedule moving forward. At the end of the day, though, 8-0 is 8-0. When you're the coach of the league's only undefeated team, you're the Coach of the Year. [ESPN]

It can always be way worse

The Eagles on their worse day still probably look far better than the current state of their next two opponents.

When Washington's in the news for anything, it's almost never good, and right now it's because of a federal criminal investigation on allegations of ownership skirting the books.

The Colts, meanwhile, are in full-on dumpster fire mode. With an anemic offense, they fired head coach Frank Reich and brought in franchise alum Jeff Saturday, who has never coached a down of NFL football, from the outside as the interim coach. And from where things stand right now, with the Colts a mess, that decision only comes off as a short-sighted one from owner Jim Irsay for a grab at any good PR.

Things are good right now for the Eagles. They weren't always, but then again, it can always be way, way worse as Mike Sielski writes:

Even if the Eagles do manage to lose one or, heaven forbid, both of these upcoming games, though, they’ll still be in excellent shape both in the NFC standings and in their standing within the league. There has been and will be plenty of reasons to criticize the Eagles and their leadership. But when it comes to fulfilling the primary purposes of an NFL franchise — be consistently respectable or even excellent, don’t do much to embarrass yourself or your city or your fans — the Eagles fare pretty well relative to their counterparts. [The Inquirer]

Tight end Dallas Goedert is on pace for a career year, which has been a key part of the Eagles' 8-0 start.

At the rate he's going, he may very well enter the conversation as one of the league's top tight ends, heck, his coaching staff believes he's already there.

Goedert, 27, had a big 2021 season and his numbers really took off after [Zach Ertz] was traded in October. The pace in the second half of 2021 really foreshadowed his 2022 success. But this could be the year Goedert finally makes the Pro Bowl.

Last season, the two tight ends selected from the NFC were [George Kittle] and then-rookie Kyle Pitts. Kittle missed a couple games already and Pitts’ numbers are way down in Year 2. So this could be the year for Goedert. And even if [Travis Kelce] continues his ridiculous run, Goedert could also be in line for second-team All-Pro if things keep going this way.

“He continues to show it week in and week out, what he does on the field,” [Offensive coordinator Shane Steichen] said. “It starts in the meeting rooms. It starts on the practice field. The way he takes care of his body to get ready for football games. And the way he mentally prepares for football games.

“Then just his strength and size and his quickness and his play strength, it's at the top of the league right now without question.” [NBC Sports Philadelphia]