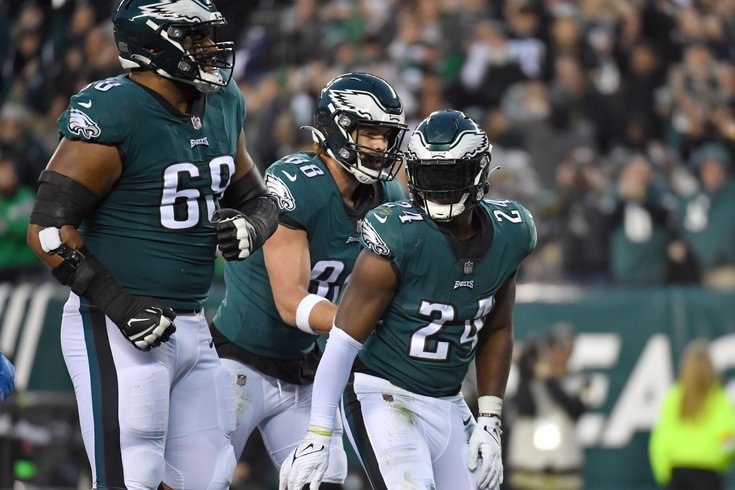 Here's where people around the country have the Eagles ranked heading into Week 11 of the 2021 regular season. Oh, and here's our version of these sellout rankings, too.

The only realistic path to the playoffs is by securing a wild-card berth. Currently, the Eagles are one game back of the final slot. The Saints are one of the teams they're contending with. A win Sunday could give them an essential tiebreaker advantage over New Orleans if the teams both end up with the same record. Philly already owns the tiebreaker over the Panthers and Falcons after beating them earlier this season. They'd be positioned well for a late playoff push if they can find a way to register their first home win of the season against the Saints.

#JimmySays: Beyond the correct points made above about potential tiebreakers, it would be hard to climb out of a 4-7 hole, even with a very easy schedule ahead.

If the Eagles go on to make a dash to the playoffs this season (not a pipe dream in the wide-open NFC Wild Card race), we might point to Darius Slay’s 83-yard fumble return as the season’s turning point. On the final play of the third quarter, Slay scooped up Melvin Gordon’s fumble, fumbled the ball himself, then recovered and dashed nearly untouched to the end zone to silence the fans at Mile High and send the Eagles to their fourth road victory in six tries. With a steadily improving Jalen Hurts under center, the Eagles have a chance to make some noise if their defense can continue to deliver impact plays like we saw from “Big Play Slay” on Sunday.

#JimmySays: I'm pretty sure that play will at least be the Broncos' turning point this season.

Jalen Hurts’s development this season has been a pleasant surprise, perhaps even for the Eagles themselves, who didn’t intend to start the second-round pick in his second season and quietly lurked on the QB market during this past offseason. But Hurts’s play the last three games, in wins against Detroit and Denver and a close loss to the Chargers, should at least earn him more consideration by the organization.

#JimmySays: The way Hurts played in the first half against the Broncos is his best argument to be the starting quarterback going forward. If he can be something close to that guy the rest of the way, he has a chance.

MORE: WTS: Eagles a playoff team? Hurts the future? Let's overreact after one win! | After a fresh start in CFL, Shawn Oakman still has NFL dreams

After mostly ignoring its run game during its first seven games of the year (outside of Jalen Hurts scramble plays, anyway), Philly’s emerged with a brand-new smashmouth identity over the last three weeks―and that style could be here to stay. The Eagles posted a ridiculous 236 yards and four touchdowns on the ground in a 44-6 win over the Lions in Week 8, and followed that up with another 176 yards and two scores on the ground in a narrow loss to the Chargers last week. Then, on Sunday, Philly showed that neither of those two games were matchup-specific outliers, galloping to 214 rushing yards on 40 totes in a dominant 30-13 win over the Broncos on Sunday.

Philly split the workload between its two main backs in the win, with Jordan Howard (12 carries, 83 yards) leading the way and Boston Scott providing a speedy change of pace option (11 carries, 81 yards). Hurts did his typical thing too, mixing scrambles and read-option looks en route to 14 carries for 53 yards of his own. The team’s success on the ground helped open things up down the field for Hurts, who finished an efficient 16-of-23 for 178 yards with two touchdowns and a pick, a stat line that would’ve been better if not for a bad end zone drop by Quez Watkins just before the half. All in all, the Eagles dominated time of possession (34:58 to 25:02), mostly took care of the football, and executed on third down (converting on six of 13 tries).

This style of offense makes so much more sense for an offense helmed by a young quarterback like Hurts, who can function as a force multiplier for his team’s run game because of his ability to pick up chunk yards with his legs. Critically, the balanced tack has effectively taken pressure off of Hurts to carry the team with his arm, which would’ve been a tall order for any second-year quarterback with a shallow receiving corps outside DeVonta Smith (who finished with four catches for 66 yards and two touchdowns). The proof has been in the pudding the last three weeks: As The Athletic’s Sheil Kapadia points out, the Eagles rank first in Expected Points Added (EPA) per drive and actual points per drive (3.23) over the last three weeks, and they rank second in points per game in that stretch (28.0).

The Eagles sit at 4-6, still outside the NFC playoff picture. But with continued strong play from this offense, Philly could make a run down the stretch. They’ve got a tough matchup with New Orleans next week, but from Week 12 on, they draw matchups against the Jets, the Giants twice, and the Washington Football Team twice before finishing up their year against the Cowboys. There’s plenty of winnable games in there, and it won’t be a huge surprise if the Eagles emerge as a dark-horse playoff team.

#JimmySays: It's strength on strength this week, as the Saints have the No. 1 rushing defense in the NFL, allowing just 3.1 yards per attempt. The next-closest team is allowing 3.7 yards per rushing attempt.

Good luck figuring them out. Philadelphia is 4-2 on the road with an average margin of victory of three TDs, but 0-4 at Lincoln Financial Field – though three of the defeats are by six points or fewer. But keep an eye on this team, which owns the NFC's easiest schedule the rest of the way.

#JimmySays: It's not really that hard to figure out. They've mostly played good teams at home, and bad teams on the road.

The Philadelphia Eagles appear to have found a winning formula.

In recent weeks, the Eagles have dedicated themselves to running the football. Against the Broncos in Denver on Sunday, Philly peeled off 40 carries for 214 yards for an average of 5.4 yards per tote. Eagles quarterback Jalen Hurts told reporters after the game that it felt good for his squad to be the one dictating tempo on a weekly basis.

Despite winning two of three, the Eagles are still two games under .500 and well off the pace in the NFC East. But with five of their last seven games coming against teams that currently have a losing record, if the Eagles keep playing well, Philly might be able to get back into the wild-card conversation in the NFC.

#JimmySays: Hurts is playing with confidence. All it took was taking some pressure off of him.

The Eagles have gone from a team that ignored the running game to one of the most run-heavy teams in the league. They ran for 214 yards on a Broncos defense that a week earlier shut down the Cowboys. Whatever works.

#JimmySays: It was clear in June that being a run-heavy offense was this team's best chance of winning games.

They did a lot of good things winning at Denver. They got the running game going in a big way, which led to a dominant showing.

Also, lol 26th, behind the Dolphins.