Eagles plan to use variety of players in slot corner role 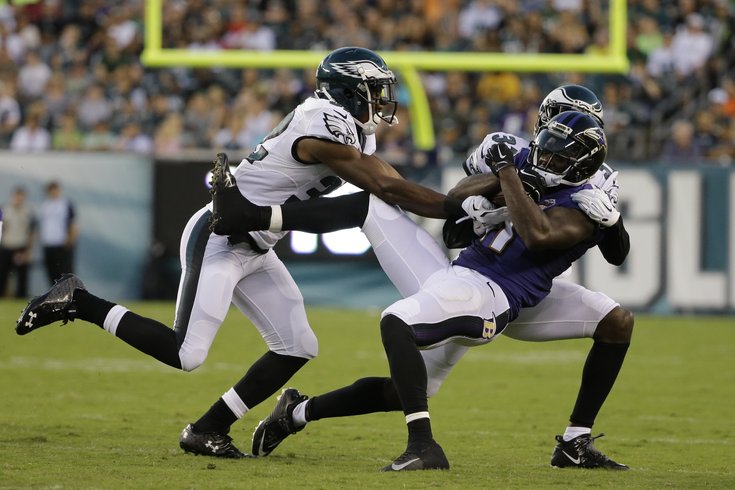 Who will play slot corner for the Eagles this season? Everybody!

When the Eagles traded Brandon Boykin to the Steelers for a conditional fifth-round pick that could become a four, they took a calculated risk that rookie cornerback JaCorey Shepherd was ready to thrive in that role. After Shepherd tore his ACL, the Eagles were left without their top two slot corner options.

When asked if he knew what the Eagles would be doing at the slot corner spot, Chip Kelly said succinctly to reporters, "It depends on who we’re playing." That may sound like a quick non-answer, but it is something that Bill Davis talked about at a little more length after the final preseason game against the Jets.

"We'll go over a lot of scenarios," said Davis, "and sometimes it may be, 'How big is that guy that's in their slot?' That's one of the benefits of training multiple guys. If you have to cover (a guy like) Jordan Matthews, then you want a taller corner in there, like Seattle put (Byron Maxwell) in there when they had to cover him. So it depends who they are, but we'll come up with a nickel to start with.

"I would say (there will be multiple options) to start, unless someone just takes it and owns it... But right now, let's see who we have to make this work with."

While the Eagles will be without Boykin and Shepherd in 2015, they aren't without options. Let's take a look at who could fill in at the slot position.

• Byron Maxwell: As noted above by Davis, last season the Seahawks used Maxwell to follow Jordan Matthews around all game, and he did a tremendous job, as Matthews had just two catches for 23 yards. While the Eagles are a rare example of a team that uses their best receiver in the slot, there are other teams around the league who will often shift their big, alpha-dog receiver inside when they go to three- and four-WR sets. For example, the Cowboys often use Dez Bryant in the slot, as we saw when they were able to get him matched up on Patrick Chung in the "2013 NFC East Championship Game."

Another example would be Larry Fitzgerald, who has destroyed the Eagles from the slot for years.

Davis had previously noted that Maxwell could trail an opposing receiver all game, if the opposition's personnel warranted it. The Cowboys and Cardinals are two examples of teams where he could be used in that type of role.

• Nolan Carroll: Carroll will start opposite Maxwell this season. However, during the preseason, the Eagles toyed with shifting Carroll inside to the slot with Eric Rowe coming onto the field to play the outside. Carroll has experience playing the slot last year with the Eagles, although that was mostly in their "dime linebacker" role.

• Eric Rowe: Rowe's skill set is far better suited for the outside, as he excels at jamming receivers at the line and getting them off their routes early in the play. When receivers are able to get a free release, he will struggle to mirror smaller, shifty receivers. Rowe acknowledged as much after the Jets game. "With the bigger guy, I can get my hands on them, knowing that he's not going to run away from me. If it's a smaller guy, I have to get on my toes, gotta stay ready. He's not really going to try to play physical, but if I know it's a big guy and I can get my hands on him I feel like I can keep up with him."

• E.J. Biggers: Biggers has adequate height at 6'0, but has a smaller frame at 180 pounds. Biggers has played on the outside, in the slot, and at safety throughout his NFL career. He is coming off a bad season in Washington, but had a very good camp/preseason. He could be in the mix to handle the smaller, shifty guys.

• Denzel Rice: Rice primarily played on the outside throughout camp, and he is likely to be one of the team's inactive players to start the season.

• Malcolm Jenkins and Walter Thurmond: As we all know by now, the Eagles prefer safeties who can drop down into the box and cover slot receivers. Malcolm Jenkins was drafted 14th overall in the 2009 as a corner, before eventually being moved to safety. In training camp, I felt that he looked like the best slot corner on the team. Opposite Jenkins is Walter Thurmond, who won a Super Bowl manning the slot corner job for the Seahawks. That was a deficient area of Nate Allen's game. The Eagles now have two safeties who can cover man-to-man, which gives them some flexibility to stay in their base set when opposing offenses go three wides.

Davis said that he already has familiarity with Eagles' first few opponents and their slot receivers. "I don't go much farther than the first two games, and then we've got (the Jets) for Week 3, so we got a good feel for them... The first three are pretty familiar opponents."

Let's look at the Eagles' first four opponents, since the Eagles also have familiarity with the division rival Redskins.

Hankerson has some size, at 6'2, but he was never really much of a physical presence in his time with the Redskins. He plays more like a speed guy. The Falcons have two physical receivers on the outside in Julio Jones and Roddy White. This could be a situation where Maxwell trails the stud (Jones) all game, with Carroll matched up on White, and Biggers handling slot duty.

Again, as noted above, Dez Bryant is a logical player for Maxwell to trail for the entirety of the game. That would leave Carroll to match up against Terrance Williams, and Biggers to handle slot duties on Beasley in 3-WR sets. It is also noteworthy that the Cowboys want to run their offense through their rushing attack, so the Eagles could certainly opt to stay in their base set against Dallas' 3-WR sets and drop Thurmond/Jenkins down into coverage.

The Jets have excellent size in their receiving corps, with Brandon Marshall (6'4, 230), Eric Decker (6'3, 215), and potentially Quincy Enunwa (6'2, 225). Assuming this is the trio they roll out against the Eagles, it would make sense against for Maxwell to trail Marshall, with Rowe coming onto the field to play outside against 3-WR sets. If Kerley is the slot receiver, that could change things to some degree, but for now we'll project Enunwa.

The Redskins have three shrimpy receivers in DeSean Jackson, Pierre Garcon, and Andre Roberts, all of whom are sub-six foot. You will likely not be seeing Eric Rowe against this trio, and Maxwell would probably be unlikely to trail any of those guys. A season ago, the Redskins receivers were nightmares for the Eagles' bigger, slower corners. I would imagine the Eagles will keep it simple with Maxwell, Carroll and Biggers, with an emphasis on not getting beaten over the top.