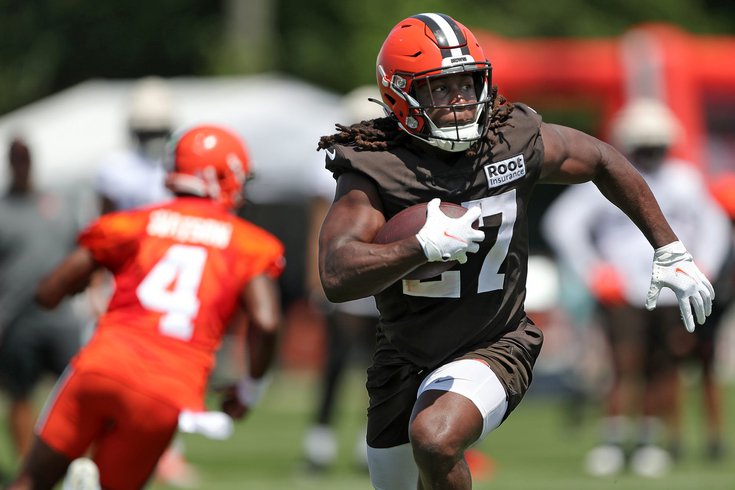 It has been noted endlessly this offseason that Jalen Hurts has a supporting cast that should make it easy for him to succeed in his third season at quarterback for the Philadelphia Eagles. Stated similarly, the offense is loaded.

• The starting five along the Birds' offensive line is arguably the best in the NFL, with outstanding depth behind them.

• A.J. Brown, DeVonta Smith, Quez Watkins, and Zach Pascal have diversified skill sets that complement one another well. Brown is already a star player, and Smith is well on his way to becoming one.

• Dallas Goedert can make plays at all three levels of the defense from his tight end position, and he can also block.

After observing a few weeks of Eagles training camp, it is rather clear that the shaky spot is at running back, and the Browns' Kareem Hunt — who wants to be traded — would be a perfect fit for this offense.

Before we get to Hunt, let's review what the Eagles already have in place at running back:

• Miles Sanders: Sanders looked explosive early in camp, and could be primed for a good season. He looks fast and agile, and appears to have added muscle this year. If healthy, he can be an impressive runner with big play potential. However, the two main concern areas are his hands and his durability. Sanders is currently out with a hamstring injury, and while it is not serious, it does serve as a reminder that three different injuries caused him to miss games in 2021.

• Kenny Gainwell: Nick Sirianni would love for Gainwell to grow into something of a mismatch creator as a pass catcher out of the backfield in the Eagles' offense, like he had with Nyheim Hines when he coached in Indianapolis. That has not materialized in camp. When the ball goes to Brown, Smith, or Goedert, the results are usually positive. When the ball has gone to Gainwell, not as much. The hope is that Gainwell can make a big leap from his rookie season into Year 2, but that has not happened yet.

• Boston Scott: The Eagles seem to view Scott as a backup to Sanders only. In 2021, Scott simply did not get on the field in the Eagles' offense whenever Sanders was healthy, and his role is unlikely to change in 2022.

• The rest: And then there's Jason Huntley and Kennedy Brooks, who are unlikely to crack the initial 53-man roster. The Eagles also employed Jordan Howard in 2021, who got tough yards between the tackles that the offensive line blocked up for him, nothing more, nothing less. He too has durability concerns, by the way.

It is mostly accepted that the Eagles could, should, and probably will add a power back at some point either before the start of the season or during it, but if there are also concerns about Gainwell's ability to contribute efficiently as a receiver, they'll need a player to fill that role as well.

In Hunt, the Eagles could add a big back who is physical between the tackles, but who is also an accomplished receiver, and unlike Howard, can also make defenders miss.

In case you're unfamiliar with the Hunt timeline, he was a third-round pick of the Chiefs who immediately became a star player his rookie season in 2017, leading the NFL with 1,327 rushing yards. In Year 2, he was outstanding once again, racking up over 1,200 yards from scrimmage and 14 total TDs in 11 games before a video emerged of him assaulting a woman. He was quickly and rightfully released by the Chiefs, ending his 2018 season.

Hunt landed with the Browns in 2019 as a reclamation project, backing up another star running back in Nick Chubb. His opportunities have since been limited, but when called upon he has produced. In 2021, Hunt averaged a hair under five yards per carry. As you can see below, Hunt can do everything a player like Howard can, but so much more. (You'll have to click "Watch on YouTube" to see the video.)

In my admittedly extremely small sample size of observing the Browns (basically one practice), I feel confident in two things:

With the unhappy Hunt scheduled to be an unrestricted free agent in 2023, the Browns may as well trade him in what is likely going to be a lost season anyway with Deshaun Watson out for at least 11 games.

From the Eagles' perspective, it would be a shame to have the structure in place to field another elite rushing attack in 2022, only to see it operate at a level below its potential because of the many obvious question marks at running back. Oh, and if the rushing attack is not operating at a high level, what then happens to the passing game?

Hunt's past will be an automatic "no" for some, which is perfectly understandable. But he could also get the team a little closer to a Super Bowl in 2022.