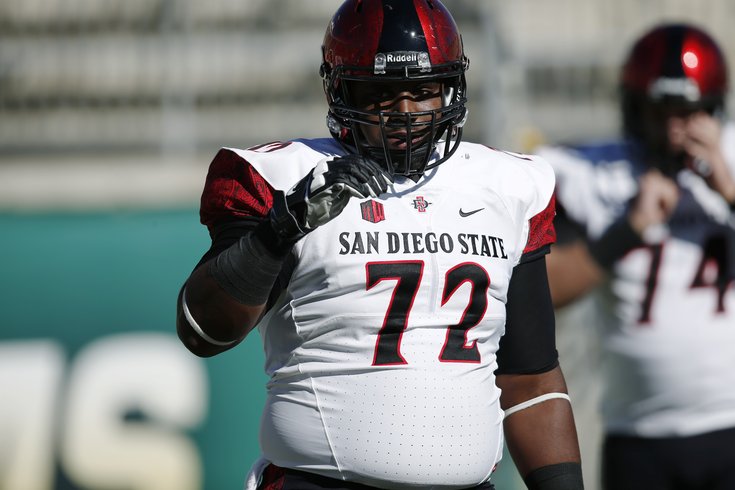 Darrell Greene was a priority undrafted free agent for the Eagles.

When the Philadelphia Eagles traded up to the No. 2-overall pick in the 2016 NFL Draft, as we know, it came at a high cost. In the 2016 draft itself, the Eagles had to part with the eighth-overall pick, as well as their third- and fourth-round picks. If you'll recall, they were also already without their second-round pick, which was used to fetch Sam Bradford last offseason.

With a dearth of early picks and a roster that lacks quality depth at a number of positions, it became crucial that the Eagles hit on their later picks, as well as some undrafted free agents.

Speaking after the draft, Howie Roseman was asked what their approach to the undrafted free agency portion of the draft was this year.

"Aggressive," he said. "We were extremely aggressive."

Howie wasn't lying. According to Field Yates of ESPN, the Eagles spent more in guaranteed money on undrafted free agents than any team in the NFL, and by a wide margin:

Greene and Tavarres combined made more in guaranteed money than all but 29 of the 31 other teams across the NFL. Greene himself acknowledged that he was paid more than the typical undrafted free agent.

"I really appreciate the Eagles for putting the offer out there and getting me here," he said.

But it wasn't all about money, according to Greene, who said he had a number of teams interested in him.

"When (Eagles OL coach Jeff Stoutland) came out to work me out, I liked his philosophy," he said. "I liked the way he coached. That was a big part of it. I knew that they had a revamp of the coaching staff, kind of starting fresh in a sense, so I wanted to be a part of that."

Money aside, highly sought after undrafted free agents will pick teams where they think they can make the roster. Greene's point about a new coaching staff is noteworthy. With a new regime in place, veteran players who are already on the roster no longer have the same type of job security they once did, as they may have been brought aboard by a different coaching staff. That could, in theory, give an undrafted free agent a better chance of making a roster over another player who may have to re-prove himself to a new regime.

On Tuesday, Jim Schwartz noted what was appealing about Tavarres.

"He can run, made a lot of plays in college, but he also went from junior college, cup of coffee at Arkansas to Incarnate Word, so he's got a big jump ahead of him," he said. "But he has the skill set to be able to do it."

Here is the full list of Eagles undrafted free agents, with their signing bonuses and total guaranteed money, via email from Yates.

Yates guessed that some of players above have offset money in their deals to protect Philly in case they don't make the roster, but end up elsewhere via the waiver system.

In case you missed it, here is our analysis of the Eagles' undrafted free agents, from after the draft.