Leodis McKelvin likely a favorite to start at cornerback for Eagles 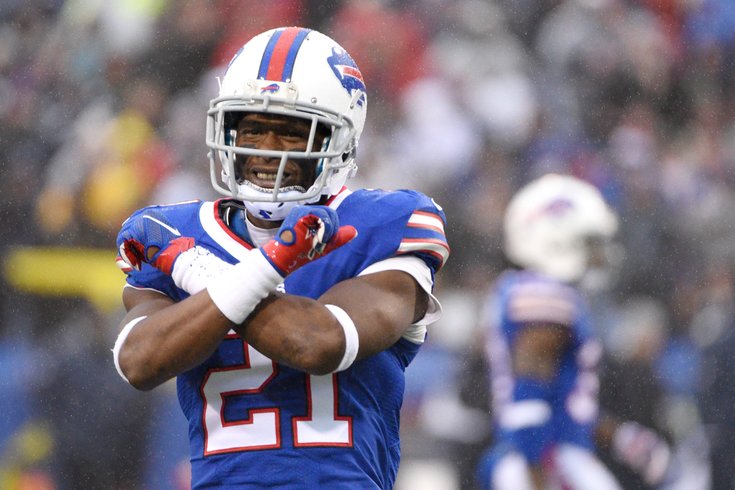 Leodis McKelvin is my front-runner to start at CB for the Eagles opposite Eric Rowe this season.

In 2014, in his only season playing under defensive coordinator Jim Schwartz with the Buffalo Bills, CB Leodis McKelvin was really good. Unfortunately for McKelvin, it was cut short when he fractured his ankle in the Bills' 10th game and was done for the season.

"That was my best year as far as getting interceptions, and being able to get my hands on the ball," said McKelvin. "But I believe the year before that I was rated near the top (of the NFL) with the least percentage of completions being thrown my way. I was at less than 50 percent that year, in 2013, before Jim came in. When Jim came in I told myself I was going to get my hands on the ball, get more picks and things like that."

After the first seven weeks of the 2014 season under Schwartz, McKelvin had four interceptions, which led the NFL. He was playing at a Pro Bowl level.

"The year I had him he was playing at a really high level before he got hurt," said Schwartz. "He broke his ankle against Miami, and really was playing at a high level. He's not the tallest guy around, but he can jump, he can play the ball in the air. Mentally and physically tough. I don't know if you see that just seeing his body shape. But he'll go throw his body around and hit. He was a first-round draft pick. He's played at a high level in this league."

McKelvin was the first of five corners selected in the first round of the 2008 NFL Draft, 11th overall, in a class that included Pro Bowl selections Dominique Rodgers-Cromartie, Aqib Talib, and Brandon Flowers. However, he didn't quite begin to break out under he played under Schwartz in Buffalo, when he was 29 years old and in his seventh year in the league.

After watching McKelvin's interceptions that season, they weren't of the "lucky" variety.

Here's McKelvin playing trail technique against the Dolphins' Jarvis Landry. Once Landry commits to the route he's running, McKelvin knows he's in good position so he gets his head around to locate the ball and make a play.

Here he is ripping the ball away from one of the best receivers in the game, DeAndre Hopkins.

Here he is reading the receiver, undercutting his route, and keeping both feet in bounds for a pick.

And this one didn't count after review (the ball was poked free by the receiver and it briefly made contact with the ground), but it again underscores McKelvin's aggressiveness in trying to make plays.

And finally, here he is forcing a fumble against Brandon Marshall.

Now 30 (he'll turn 31 before the 2016 season begins), McKelvin will get his second chance to play for Schwartz on his second team with the Philadelphia Eagles. McKelvin was an under-the-radar free agency signing before the NFL's free agency period began, as the Eagles quickly inked him to a two-year deal worth $6.2 million four days after the Bills released him.

Schwartz acknowledged a certain level of comfort with former players of his that the Eagles have brought aboard.

"Anytime you have experience with players you're going to have greater insight than people that haven't been up close and personal with them, so to speak," he said. "I'm not writing any checks and I'm not making any final decisions. But anytime we have a resource, whether it's me, another coach, some scouts came from different organizations, you know, you always try to get some firsthand knowledge of a player, and I think it was obvious that I was comfortable with those guys."

It's also noteworthy that the Eagles are paying McKelvin more than another presumed starting candidate, Nolan Carroll, who re-signed with Philly a week into free agency on a one-year deal worth $2,047,500.

It is assumed by most that Eric Rowe will start at one corner spot in his second year in the NFL. Beyond Rowe, there are a handful of players competing for the starting job on the other side. Many believe that job will be won by Carroll, who started for the Eagles a year ago. Very early into the Eagles' offseason, I don't see it that way.

In the first two media-attended practices during OTAs, McKelvin was with the first team defense, while Carroll has not yet practiced. While it is certainly too early to crown a starter at corner just yet, McKelvin was a higher priority signing in free agency, he's making more money than Carroll, he had a great (although incomplete) season under Schwartz, and Schwartz has already identified that he's comfortable with McKelvin.

By that logic, I'd say McKelvin is a pretty good bet to be in the driver's seat for a starting job.