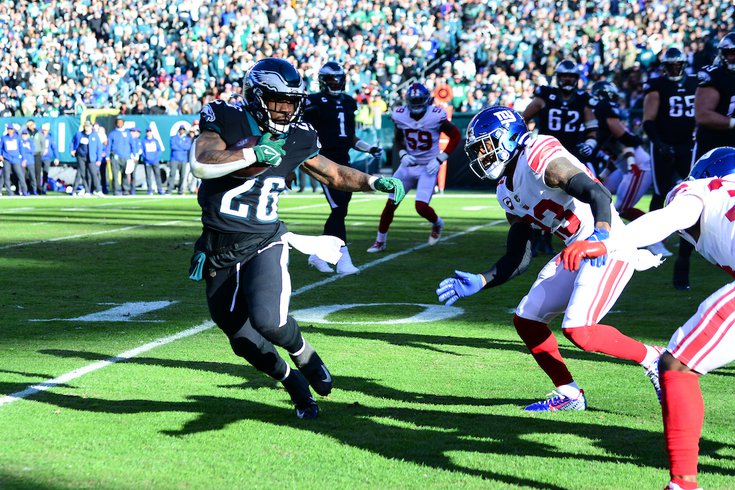 Now that the Philadelphia Eagles' 2021 season is over, we'll be taking a position-by-position look at which players will likely be back with the team in 2022, and which ones likely won't. Today we'll look at running back.

Sanders' first three years with the Eagles have been weird. As a prospect out of Penn State, there was little doubt that he would be a good runner, but that it would take some time for him to grow as a receiver and in pass protection.

In his rookie season in 2019, it was sort of the opposite, as he caught 50 passes for 509 yards and 3 TDs, and he was better as a blocker than expected, but struggled early on as a runner. As the season progressed, Sanders became a more efficient runner, and by the end of the season, he was a legitimate Offensive Rookie of the Year candidate, having racked up over 1,300 yards from scrimmage.

In his second season, the Eagles hoped Sanders would put it all together, but he forgot how to catch the football, he regressed in pass protection, and he had some fumbling issues. As a runner, Sanders had three runs of at least 74 yards in 2020, and as a result, he finished with 5.3 yards per carry. Those three long runs all counted, of course, and we're not diminishing them in any way, but if you take those three runs away, Sanders averaged just under 4.0 yards per carry on the season.

In his third season, Sanders' long run on the season was "only" 38 yards, and he often left meat on the bone by hesitating instead of hitting the gas, or simply by not seeing holes that other Eagles backs were seeing. He finished with 0 total TDs (as a runner and receiver), and yet, he looked explosive at times and somehow managed to average a lofty 5.5 yards per carry even without the long runs.

There's little question that Sanders is the Eagles' most talented running back, but he has missed four games in each of the last two seasons due to injury and has been inconsistent when healthy.

#JimmyVerdict: Sanders has one year left on his rookie contract. While it is unlikely that the Eagles will open the purse strings this offseason and try to sign Sanders to a lucrative contract extension, there's also little reason to believe he won't be back as the starting running back in 2022. Stay.

Howard began the 2021 season on the Eagles' practice squad, but after Sanders landed on injured reserve with an ankle injury suffered against the Raiders, Howard became the primary running back, and he responded with four consecutive strong performances in Sanders' absence:

Howard wasn't a big play threat, but he did a great job of seeing openings and running hard through them. He kept the Eagles on schedule on early downs, and he was able to pick up first downs in short yardage situations. Howard's success was probably a product of the dominant offensive line blocking in front of him. On another team he may not have been as effective. Nevertheless, his style worked in the Eagles' offense.

#JimmyVerdict: The Eagles could look to add a younger, more explosive power back, but they'll keep Howard's number on speed dial. We'll guess that Howard is back in training camp, but with no guarantees that he'll make the roster. Back in camp.

Gainwell got just over 100 touches in the regular offense as a rookie. He had 68 carries for 291 yards (4.3 YPC) and 5 TDs as a runner, and he chipped in 33 catches on 50 targets for 253 yards and 1 TD as a receiver. He actually had the same number of receptions on the season as Jalen Reagor.

Gainwell often lined up in the slot, and Nick Sirianni would occasionally try to scheme up short throws to go his way, with mixed results. It was perhaps interesting that Gainwell was targeted five times in the playoffs against the Buccaneers. He caught all five targets for 49 yards and a TD.

#JimmyVerdict: Gainwell will obviously be back, and it will be interesting to see if he can show during training camp that his role in the Eagles' offense should grow. Stay.

Scott seemed poised to have a role in the Eagles offense from the start of the season, but interestingly he didn't get a carry until Sanders left with his ankle injury against the Raiders Week 7.

Like Howard, Scott was effective during the four-game stretch that Sanders was on injured reserve. With both Sanders and Howard out against the Giants Week 12, Scott got his best opportunity of the season to produce, but with a six-point deficit near the end of regulation, he lost a fumble that may have cost him playing time down the stretch.

Scott is a nice change of pace back who has had his share of moments with the Eagles over the last three seasons, but he enters this offseason as a restricted free agent. The cost to retain Scott on a "right of first refusal" basis is projected by OverTheCap.com to be $2,433,000 in 2022.

#JimmyVerdict: The bet here is that the Eagles will view $2,433,000 as a little too rich for their blood for a projected No. 3 or No. 4 running back, though they would probably like to have Scott back on a less expensive deal. We'll guess that he does indeed sign back in Philly on a cheap, one-year deal. Stay.

Huntley was probably the best kick returner on the team last season, and he showed some juice both during training camp and against the Cowboys in the practice squad game, but the Eagles don't seem to have a use for him in real games.

#JimmyVerdict: Huntley is still under contract with the Eagles, and is cheap. He'll at least be back in camp.