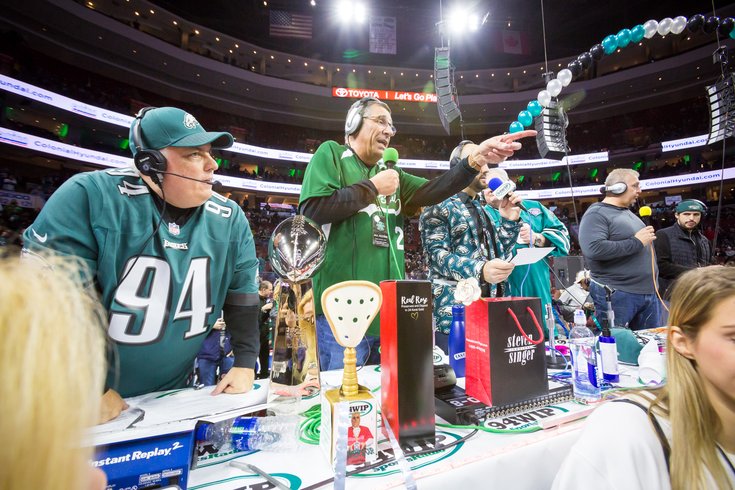 In this file photo from 94WIP's Wing Bowl 26, morning show host Angelo Cataldi holds a microphone during the broadcast of the event at the Wells Fargo Center. On Tuesday, Oct. 30, 2018, Cataldi announced Wing Bowl was over and would not take place in 2019.

Wing Bowl, after much speculation, is officially over. Angelo Cataldi announced the end of 94WIP's annual wing-eating contest during his morning show on Tuesday, ending a 26-year run.

After teasing a major announcement on Twitter, Cataldi and the Morning Crew announced WIP's Wing Bowl 26, which was held last February, was the annual event's last. The reasoning behind the decision, according to Cataldi, was because the Philadelphia Eagles won the Super Bowl.

RELATED: Check out PhillyVoice's coverage of past Wing Bowls

The tradition, which began in 1993, packed thousands of people to the Wells Fargo Center in recent years. The event always took place the Friday morning before the Super Bowl and was created by morning show co-host Al Morganti as a means to help ease Eagles fans' pain because usually the local team was not playing in the championship game.

Concurrent with the announcement of the end of Wing Bowl, 94WIP has created a website commemorating the event, wingbowlforever.com.

It didn't take long for social media reactions to pour in, from some who felt the end of Wing Bowl was long overdue, to others who were upset with the news.

It’s (not) so hard to say goodbye to yesterday. @SportsRadioWIP bids farewell to #WingBowl after 25 year run. And now, this retrospective. pic.twitter.com/OnyIsITpzm

Good move Philly & WIP. Time for Philly fans to start acting like the Super Bowl champions we are — not the deplorable fans the rest of the country thinks we are. #flyeaglesfly 🦅 https://t.co/GqpB4BiOS4

🚨🚨🚨This is a tragedy. @GrittyNHL NEEDS to attend a Wing Bowl. It is Philadelphia perfection. https://t.co/GXsFI9XMyK

Wing Bowl was a tremendous radio promotion for @SportsRadioWIP for 26 years. Filled arenas, drew national publicity. But times change. It's time to move on. Good decision by station.

We will be hosting our own wing bowl in the old parking lot of Philadium. $5 for all you can eat hut wings

Wing Bowl going away makes it official: This is the worst year in Philadelphia sports history

Waaaaaaaiiiiit @SportsRadioWIP hold one more wing bowl I’ve always wanted to go and never have been able to! This is a tragedy think about Gritty!

The entire city of Philadelphia should still get blackout drunk by 6:30am on the Friday before the Super Bowl regardless of the Wing Bowl being over

Wing bowl sucked! It was a stain on Philadelphia for years. Sophomoric, degenerative, debauchery. Just like that old pervert cataldi, the self-described “legendary broadcaster” who constantly screams on air about women’s boobies!! Both can’t leave Philadelphia fast enough.