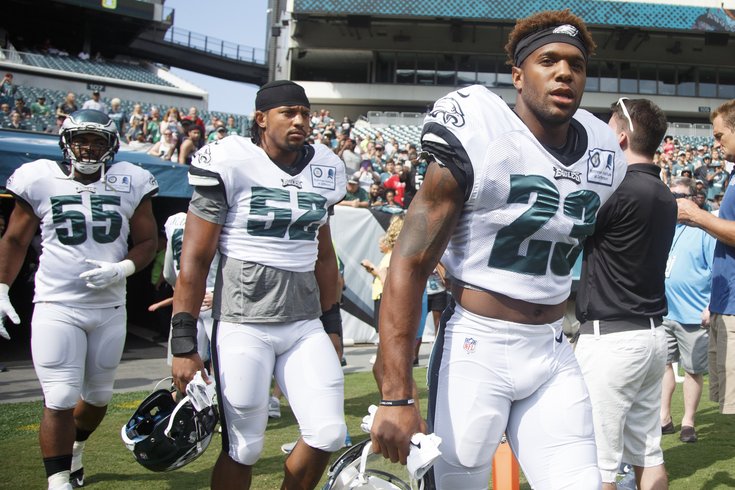 Rodney McLeod has had a great camp.

At Philadelphia Eagles training camp today, it was all defense, as none of the Birds' three quarterbacks were sharp. The defensive line created pressure all day while the back end blanketed receivers. Let's just get right to the notes.

• Sam Bradford was picked off twice in team drills. The first was on an off-target pass that was brought in by Jalen Mills. The second was on a desperation ball deep down the field that was picked by Rodney McLeod when Bradford felt pressure. Bradford has not often gone deep during training camp, but he has had the weird occasional habit of chucking it down the field when the pocket has closed in, which is unlike him. On a side note, McLeod has had a great camp.

• Conversely, Carson Wentz tends to look for receivers in the intermediate and deep parts of the field when he has a clean pocket, and like most quarterbacks, will look for shorter targets when pressured. Like Bradford today, Wentz didn't have his best day. The wobble was back, and he overthrew a number of targets.

• The offense in general was very sloppy today. By my count the Eagles had at least six false starts, and they probably had even more than that. That's forgivable in OTAs and minicamp, but not two weeks into training camp. Josh Huff had at least two false starts from his wide receiver spot. Not good.

• Trey Burton was an exception for the offense today. As usual, he had another impressive day. My favorite moment of the morning came when Burton was running down the left sideline trying to break free from Mychal Kendricks. With the ball in the air, Kendricks had his hands on Burton, which allowed Burton the opportunity to push back, giving him added separation. It was borderline offensive pass interference, and Burton made the catch for the TD.

Offensive pass interference is criminally under-enforced in the NFL. It seems like teams around the league take advantage of that, while the Eagles do not. It was good to see Burton being physical with a defender while tracking a ball in the air.

• Another exception for the offense was Ryan Mathews. His ankle looks fine, and there's little question he has very good burst through the hole when healthy. Sproles and Wendell Smallwood (who is hurt) aside, Mathews clearly has better burst than the healthy backs in camp. As long as Caleb Sturgis remains consistent in the preseason games, I believe he has put enough distance between himself and Cody Parkey in training camp to win the job.

• Steven Means had another nice day playing with the two's in place of Marcus Smith, who is out with a concussion. He had a sack, and was otherwise disruptive. After practice, Jim Schwartz said, "Pun intended, he means business." Schwartz has been critical of players, so when he praises one it means something... or maybe he's just trying to motivate Smith, which seems like a lost cause at this point. If camp ended today, I'm not sure how the Eagles could justify keeping Smith over Means.

• We haven't mentioned him much, but Brandon Graham has quietly had a good camp. His pressures are beginning to pile up.

• Matt Tobin has filled in for Jason Peters at LT whenever Peters has decided to take it easy, and he has played well. Tackle seems like a much better fit for Tobin, who is quicker than he is strong. Tobin was not good last year at guard. Maybe it's because he shouldn't have been playing guard.

• Another day, another bad drop by TE Chris Pantale.

• The Eagles defense showed a number of 3-3-5 looks in third and long situations. The offense struggled against it all day.

• There's one more day of practice Monday, before a pair of off days leading up to the first preseason game against the Tampa Bay Buccaneers at the Linc.