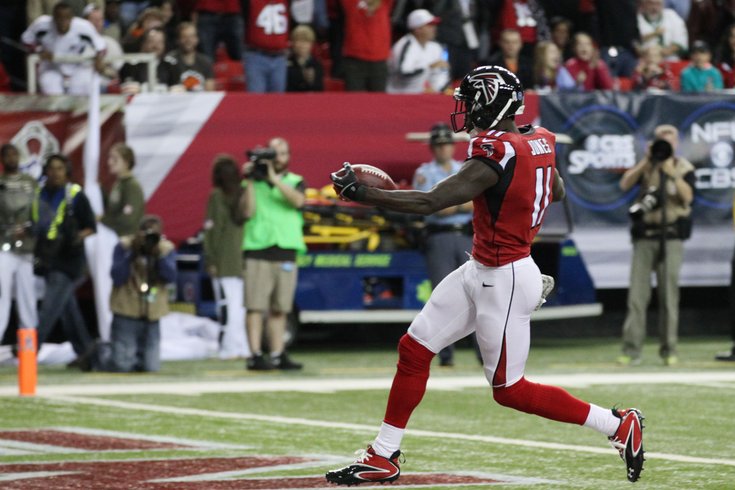 The Eagles will have to find a way to slow down stud receiver Julio Jones.

Game day is finally here, as the Eagles will take on their NFC South avian counterparts tonight in Atlanta. And so, here's our ornithological preview piece on the Eagles and Falcons:

1) Will the Eagles use Byron Maxwell to follow Julio Jones wherever he goes?

During the preseason, Bill Davis hinted that the Eagles could use Byron Maxwell to follow opposing teams' best receiver around, when it made sense to do that, depending on the opposition's personnel. The Falcons have an elite wide receiver in Julio Jones who could draw that kind of attention from the Eagles. So will the Eagles go that route right off the bat, Week 1?

"It's a possibility that we can do that," said Davis late last week. "We can go in and out of doing that too. There's a lot of things that factor in. If you chase a guy but he's always moving, you can't always chase him. There's plusses to that, and there's minuses. If you're in man-free coverage every snap, then you can go lock him up, and it's easy. But if you're playing in and out of your zones, all you can do is start the guy on his side, and if he motions across, you're no longer on that guy, so it goes back and forth. Matching up has got a little more to it than what you think, than saying, 'Hey, let's go get that guy.' If you 'go get that guy' you have to play man every snap and you don't want to do that."

In other words, there may be times during the game when the Eagles specifically try to get Maxwell matched up on Jones, but it's not something they're ever going to do for 60 minutes.

2) Can the Falcons generate pressure on Sam Bradford?

The Eagles have a significant advantage against the Falcons in the trenches. The 17 defensive linemen and linebackers on the Falcons' roster had a grand total of 16.5 sacks in 2014, and just 115 sacks among them for their entire careers, combined:

The Falcons' best pass rusher with NFL experience is probably Brooks Reed, who will not play. The other intriguing player is rookie first round pick Vic Beasley, who was an outstanding speed rusher in college, however, college success rarely carries over into the NFL immediately for most high-profile pass rushers. Below is a list of first round edge rushers selected in the last three drafts and the number of sacks they had their rookie seasons:

That would be 3.38 sacks per player. Beasley could buck that trend, but he'll be facing off against Jason Peters in his first ever pro game. If Sam Bradford gets time to throw, we saw how he can pick apart defenses this preseason with his pristine accuracy.

3) Can the Eagles' defensive backs keep balls from flying over their heads?

The 2014 Eagles gave up 72 pass plays of 20+ yards. That was the most in the NFL (third most in NFL history), with the next closest team being the woeful Chicago Bears, who gave up 65. The Eagles also gave up 18 pass plays of 40+ yards, which was also the most in the NFL. Obviously that had a lot to do with guys like Cary Williams, Nate Allen, and Bradley "Under the Rainbow" Fletcher:

The Eagles recognize that "X plays" killed them a season ago, so they overhauled their secondary and preached all offseason about not "biting the cheese." Against Roddy White and Julio Jones, the secondary is going to be challenged.

4) Can the Eagles pressure Matt Ryan?

When you're facing a max-protect team like the Falcons, it helps to have a variety of pass rushers who can get to the quarterback, and the Eagles have them in spades. When the Falcons get into obvious passing situations, Davis will have to find creative ways to deploy the likes of Connor Barwin, Brandon Graham, Vinny Curry, Fletcher Cox, and Mychal Kendricks, to name a few.

The Falcons, meanwhile, will likely be lining up like so along their offensive line:

The Falcons signed the declining Chris Chester earlier this offseason, and traded for Andy Levitre eight days ago. Meanwhile, Jake Matthews, James Stone and Ryan Schraeder have a combined 38 NFL starts between them. This is a unit whose cohesion will be tested by that impressive Eagles rush.

5) Can the Falcons slow down the Eagles' offense? Like, at all?

In 2014, the Falcons finished at or near the bottom of the NFL in the following statistical categories:

The Falcons' atrocious defense a season ago was the impetus for a coaching change that brought in former Seahawks defensive coordinator Dan Quinn, who changed over many of the players responsible for the awfulness above, and is installing a new scheme. The Falcons should be better defensively (it'd be difficult to get much worse), but it's going to take time for this unit to become a good defense. the Eagles' fast-paced attack should pose a very difficult first challenge for a defensive trying to run a new scheme.