As we've seen so far on Sunday -- highlighted by the Bills domination of the Colts and the Rams' OT win over the Seahawks -- Week 1 can be an unpredictable one in the NFL.

And on Monday night when Chip Kelly's Eagles take the field in Atlanta for their primetime matchup against Matt Ryan and the Falcons, it will be with even more unknowns than traditionally accompany a team's season opener.

Gone are Nick Foles, LeSean McCoy and Jeremy Maclin. Instead, it will be a slew of new faces for the Birds one offense -- Sam Bradford, DeMarco Murray, Ryan Mathews and rookie wideout Nelson Agholor. On defense, the Eagles will start three different defensive backs than a year ago. There will also be a new middle linebacker in Kiko Alonso, who only played a handful of preseason snaps -- due in large part to a concussion he suffered early in camp -- after missing all of 2014 with a torn ACL.

Somehow, the Falcons may have even more questions heading into the season.

After winning 36 regular season games from 2010-2012, including a trip to the NFC title game in 2012, they won just four games in 2013 and finished 6-10 in 2014. Because of that, former Seahawks defensive coordinator Dan Quinn took over as head coach after Mike Smith was let go this offseason. They also lost tight end Tony Gonzalez to retirement, but still have two of Ryan's favorite targets in Julio Jones and Roddy White.

We'll get a much better idea of just what to make of these teams on Monday night, but based on how they stack up on paper and what we've seen so far this preseason, here are 10 over/unders for the Eagles-Falcons games.

As a reminder, I'll be doing this each week -- you can check out the 10 over/unders for the entire season, here -- so feel free to put your own O/Us in the comments. You can also let me know which of mine you agree with and, better yet, which you disagree with.

That's the line currently being offered by topbet.eu, and even though it's the highest total of any Week 1 game, I still think I'd take the over. Yes, I just spent the entire intro talking about all the unknowns both teams face heading into the season, but both offenses have the potential to put up a lot of points.

Furthermore, the Eagles play at such a fast past -- not sure if you've heard that before -- that both teams should have plenty of chances to score. If Kelly's offense moved at an average tempo, it would make this a much more difficult one to predict.

Just look at the predictions we posted on Friday, and you'll see that Jimmy Kempski, Rich Hofmann and I all predicted scores totaling 62 points or more. Of course, that would mean that the Eagles defense allowed quite a few points as well. After all the personnel changes this offseason, that isn't the way you want to start the season.

Both teams finished tied for sixth in the NFL last season with 28 takeaways. The Eagles, however, turned the ball over an NFL-worst 36 times, finishing with a -8 differential.

Part of the reason the Eagles committed so many turnovers is their pace. Over the course of a season, they run more plays than any other team in the league. More plays run means more chances for turnovers. And while their opponents each week may run a similar amount of plays, no team is doing that in their other 15 games.

Another reason for their high turnover rate last season was a result of poor quarterback play. Nick Foles threw 10 in his eight starts and Mark Sanchez added another 11 in his eight-plus games after Foles went down with an injury. Bradford hasn't historically turned the ball over as much, and prior to tearing his ACL in 2013, he had 14 touchdowns and just four interceptions in seven starts.

On defense, the Eagles led the NFL with seven interceptions this preseason and forced five fumbles (two recovered). But taking home field advantage into consideration, I think they both turn the ball over the same number of times Monday night.

DeMarco Murray carries: Carries by all other Eagles RBs combined

I've written previously that I think Murray, who led the NFL in rushing last season on a league-high 392 carries, will get 50 percent of the Eagles carries. The other half will be split between Mathews and Darren Sproles, with Mathews likely getting 40 of the remaining 50 percent. Sproles may get fewer carries than he's used to, but if the preseason is any indication, he'll make up for it in the passing game.

That being said, can we expect a big game from Murray right out of the gate? That answer likely has a lot to do with how close the score is in the second half. If the Eagles can afford to give the former Cowboy some rest, they will. Considering his workload last season, Kelly will likely keep a close eye on his touches this season to make sure he's still fresh late in the season. But that's a big "if."

Being that it's the first game of the season, I think we'll see plenty of Murray, especially early on. It'll be close, but ...

Using standard ESPN fantasy scoring, the Eagles posted 153 points in 2014, or 9.56 per game. But when you look at it on a game-by-game basis, you see just how hit-or-miss this unit really was. They scored 14 or more points seven times -- including a 31-point game against Carolina -- and scored six or fewer points nine times -- including two games with negative points. If you're doing the math at home, that means that not once did they score anywhere between seven and 13 points, despite their PPG average being smack dab in the middle of those two numbers.

As for Monday night against the Falcons, I think there are going to be too many points scored for the Eagles D/ST to put up a big number. And if it's going to be another feast-or-famine season for them, the smart money is on the under.

Cutting down on extra-yardage plays was a focal point for the Eagles defense this offseason. Against a Falcons offense that boasts a pair of deep threats in Julio Jones and Roddy White, defensive coordinator Bill Davis will have his work cut out for him Monday.

After how poorly the secondary played last season -- even while acknowledging that Bradley Fletcher and Nate Allen have been replaced by Byron Maxwell and Walter Thurmond -- I still need to see them perform in the regular season before trusting that issue has been fixed.

If you make a good play -- and sometimes even if you don't -- Jon Gruden is going to get verbally aroused. 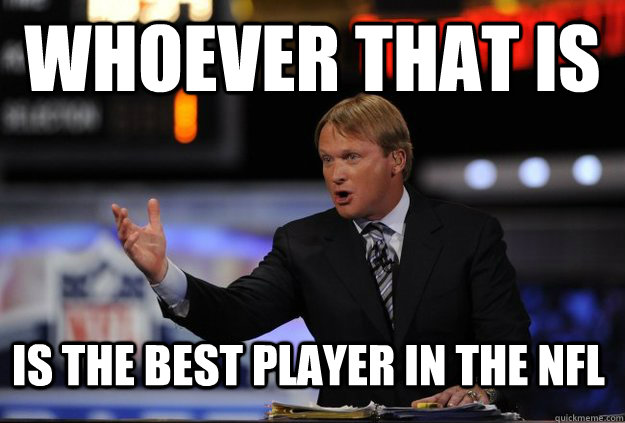 If this game was in Philly, I wouldn't even be able to make a line for this one. It would be somewhere in the hundreds and include multiple closeups of his parents in the crowd.

Being that it's in Atlanta, and that there are plenty of other storylines to talk about in this one, I actually think it only gets mentioned two or three times. But if you think the game is going to be a blowout, take the over. That will be one of the first places the conversation goes if the game becomes garbage time.

There will be at least one. Guaranteed. Especially now that Tebow has been hired by the ESPN-owned SEC Network, you know they'll make sure to get a plug in.

Nice tackle made there by Bennie Logan, the third-year player out of LSU and the SEC. Speaking of SEC, Logan's former Eagles teammate Tim Tebow also played in the SEC ... and will be back on the SEC Network throughout the season.

This one happens to hit home for me, as my two fantasy quarterbacks are Ryan (a 7th-round pick) and Bradford (a 13th-round steal). It's somewhat of a toss-up between the two this week and the fact that it's Week 1 didn't help my decision-making process.

Bradford hasn't played in two seasons but seems to have more upside, while Ryan was the seventh-best fantasy QB a year ago and is playing in his home stadium. Still, I went with Bradford and you can thank Chip Kelly for that.

We all saw what Foles was able to do in Kelly's first year with the Eagles. And even last year with the starts being split between Sanchez and Foles, the Eagles QBs combined for 245 fantasy points. For some perspective, that would've been good for 14th in the NFL, ahead of Jay Cutler but behind Joe Flacco. Not too shabby for a pair of quarterbacks who, in any other system, would struggle to crack the Top 20.

Now put a former Heisman winner and No. 1 pick in that system...

The Eagles defense finished with 49 sacks last season, tied for second-most in the NFL. That's just over three sacks a game in 2014, and as scary is it is to say, their front seven is likely going to be even better this season.

The Falcons allowed 31 sacks last season, which put them in the middle of the pack, but allowed 14 in their four preseason games this year. New coach Dan Quinn will likely offer a more balanced attack -- they ran the ball just 372 times last season compared to 632 passing attempts -- but their ground game isn't very intimidating.

If the Eagles can put up some points, and I have every reason to believe they will, Quinn may be forced to rely on Ryan's arm more than he would like. And if that happens, the Eagles defense will have plenty of opportunities to get to the QB.